It’s not as if Britain has declared war on Portugal. 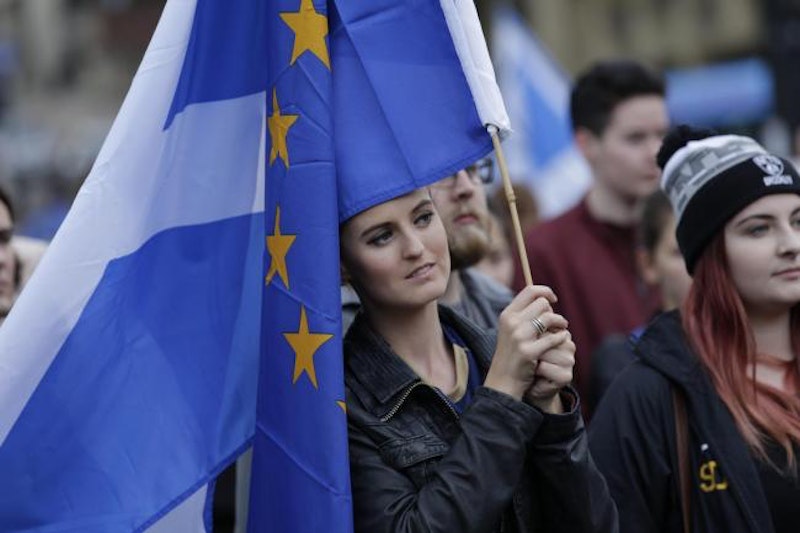 Will you calm the fuck down? Get hold of yourself. Retain your goddamn composure. Well, I don't mean you, probably, because most folks, and surely most Americans, are taking Brexit in stride, having actual things to worry about. I'm talking about politicians, professors, and “the media.”

I’ve never seen The New York Times in such a tizzy. The vote "is already threatening to unravel a democratic bloc of nations that has coexisted peacefully together for decades." It "undermines the postwar consensus that alliances among nations are essential in maintaining stability." The Times quotes the reassurances of one Ivo Daalder: "It's not that this, in and of itself, will completely destroy the international order."

The Washington Post, not to be outdone in the infantile startle response, says, "The Brexit vote just killed globalization as we know it." (Editorial note: "as we know it" is as autonomic and redundant as "coexist together.") And it deploys what has already become a cliché: "the most significant event in the postwar history of Britain," or maybe the universe.

Oh, I don't know. The constant emphasis on "postwar order" seems to indicate that the British Empire is about to declare war on Portugal or something. I don't see this as a precursor to WWIII. Has Great Britain ended any alliances, much less undermined the alleged consensus that alliances are essential to maintaining stability? Anyway, it's this sort of mindless technocratic yip-yap that GB just voted against.

Great Britain is not going to stop trading with France, I shouldn't think. How or why or when or how this "kills globalization," I’ve no idea. I feel that I can somehow face the awful fact that the Tory and Labour parties are in leadership crises. Indeed, I love to see political parties in crises. No doubt stock markets have been “roiled” and so on; get back to me in a few months and let's see where we are.

The United Kingdom may disintegrate. Dude, the Scots and the Welsh and the Irish have been talking about independence, and voting on it, ever since Daenerys Stormborn united the Seven Kingdoms.

Really, what “foreign policy experts” and Princeton professors of economics are freaking out about is their historical narrative: the problem, as all the quoted formulations show, is symbolic. The terrifying crisis that has the authorities running around in circles screaming is occurring at the non-actual level of the stories they've told themselves. They think they know the direction of history, in the course of which the world consolidates a la 1984 into five huge governments, which then consolidate into a single super-groovy marketplace in which everybody listens to TED talks all day while all the world's wealth funnels to the Clinton foundation.

But no one knows the direction of history, because history has no direction. Brexit is interesting, but it's not redirecting the history of the world, just glitching your simplistic little story.