One man’s journey from Robitussin to The Daily Stormer. 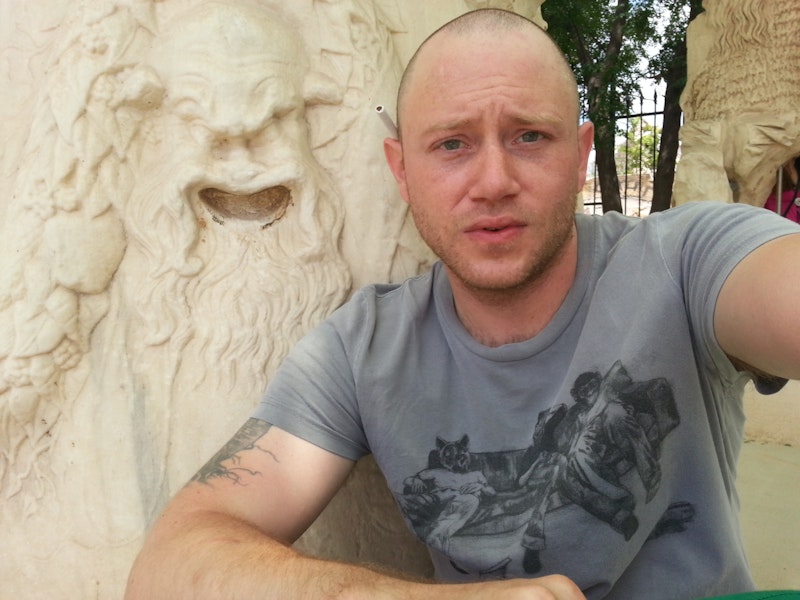 “What happened to him in the jungle is a mystery.” You don’t see these words in a lot of stories about modern-day guy life. But Andrew Anglin, malcontent and future Nazi, ricocheted his way from an Ohio hippie high school to Mindanao, the Philippines. In between he was a dropout who listened to Alex Jones and ran a conspiracy site; lizard people appear to have been a worry of his. That changed after he emerged from the Philippine jungle, age 28 and focused on the superiority of the white race. He went on to launch The Daily Stormer, a website that hit the top of the white extremist charts by being kicky and interesting, teasy and sly. “It was Nazi Gawker and it caught on,” as we’re told in Luke O’Brien’s first-rate “The Making of an American Nazi,” which profiles the little shit for The Atlantic.

Anglin is a little fellow with high cheekbones, a sensitive type who can sling words. His racial turnaround in Mindanao appears to have had a lot to do with hurt feelings. “The only logical path for humanity to take is to... return to a hunter/gatherer lifestyle,” he wrote on his website (Outlaw Journalism) when heading out. In the jungle, he predicted, he’d be “having fun, telling stories, making music, creating art, dancing, making love to the wife, joking with the old folks and generally living it up.” Now hear him on his return. “Their minds were as primitive as their mode of living,” he wrote, talking about the brown people. Anglin used to bitch about his fellow whites. Now the “European race” was fine by him. “It is only they who share my blood, and can understand my soul,” he announced.

Anglin had picked out a tribe that would be his new family. But then the tribe turned him down. That’s what he told an American acquaintance when the two crossed paths in Davao, the local big city. “They’re a bunch of idiots. Monkeys,” Anglin said. A sticking point may have been his belief that he’d marry a couple of 16-year-olds. And it’s possible, of course, that he never got near the tribe. We have the acquaintance’s testimony that the new Anglin had a gun and a shaved head. But otherwise the evidence about his turnaround is entirely things that Anglin said or posted. What these demonstrate for sure is his switch toward a specifically racial awfulness.

Going by those whose knew him, this was a shift from a more generalized awfulness. Anglin sounds like he was always a baby and a blister. In high school he banged his forehead against the sidewalk because his girlfriend kissed somebody. After they broke up, he organized some girl chums to call her on the phone and make her life hell. This tactic stayed with Anglin. When he ran a conspiracy site, he’d sic its denizens on fellow conspiratorialists who offended him. With the Stormer he did the same but more so, picking out private citizens whose lives would be flattened by waves of nasty calls and social media attacks. Another trait that stayed with him was to be a joiner. Before the white race, before the T’boli tribe, the teen-age Anglin stuck himself onto the granola crowd. Classmates at the Linworth Alternative Program remember a “quiet, insecure kid who craved attention and wanted to fit in.” He wore dreads and a FUCK RACISM patch, and he was into animal rights because his girlfriend was. At one point he kissed a surprised black guy.

Anglin also took a good deal of LSD and ketamine, and he “chugged Robitussin,” as O’Brien puts it. Because of this last habit, “he would vomit into trash cans at school.” I think this shows another trait that stayed with him. “At times while tracking Anglin, I couldn’t help but feel that he was a method actor so committed and demented, on such a long and heavy trip, that he’d permanently lost himself in his role,” O’Brien tells us. Sure, but Anglin shows a commitment to trashing himself. To become a Nazi is to become garbage, and the keynote of Anglin’s life is decomposition. In Anglin we find an ideologue who’s only heard of his ideology. Did Anglin read a book or hear a speech that helped steer him to Nazism? This very thorough piece doesn’t mention any. Nietzsche doesn’t get misread, Spengler doesn’t get namedropped. It was all radio broadcasts and Internet posts. Traditionalist Nazis may be fuming at the slovenly level of the new generation. To me it looks like a shoddy intellectual tradition has decayed down to its base slime, one that merges with the goo that already coated Anglin by the time he discovered racism. What his story captures is the powerful currents our culture generates for dragging people toward shittiness.