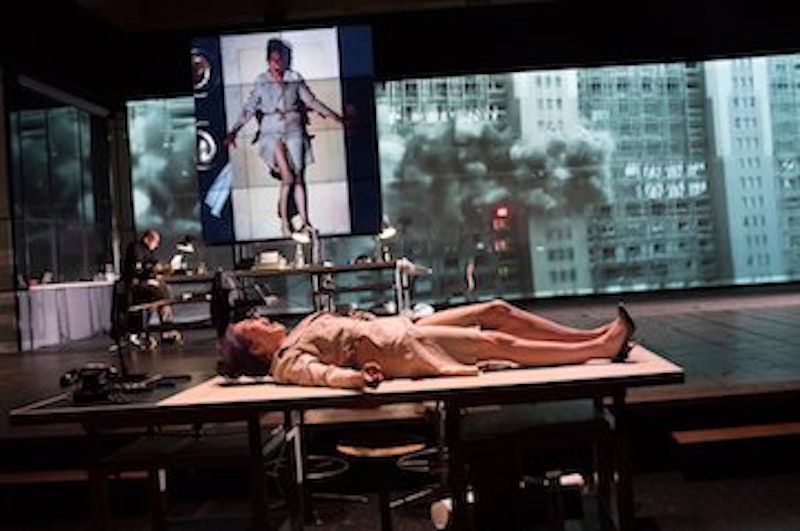 I wasn’t expecting a European stage version of Ayn Rand’s libertarian novel The Fountainhead at the Brooklyn Academy of Music to be a faithful, non-ironic, straight-up adaptation. I anticipated a left-wing “brutal reexamination” of the original text. I also hadn’t realized it would be four hours long and in Dutch, but I didn’t mind in the slightest, and it had digital subtitles.

Most of the audience didn’t seem to mind either, since they gave it a standing ovation when it was over. There was a smattering of (rude) leftists who laughed during heroic architect Howard Roark’s climactic speech about producers and parasites, but even that soulless commie faction of the audience held it together for nearly four hours before that. I’m amazed they didn’t freak out more at the intense “rape” scene (there was quite a bit of nudity in the play).

Even The New York Times’ review admitted it was good, if viewed as over-the-top pulp fiction, which I’m willing to call a “win” for the Objectivists. I guess not every critic is a villainous Ellsworth Toohey.

In the real world, artists and industrialists are frustratingly prone to seek subsidies from government, but they still occasionally do something so cool you’re almost willing to forgive them, as when Elon Musk announced that next month he intends to launch a private rocket called the Falcon Heavy from the old Apollo 11 launchpad, bound for Mars with a red Musk-made Tesla car aboard, the sound system playing David Bowie’s “Space Oddity.” I’m not exaggerating when I say this may be not only the coolest thing ever done but quite possibly the coolest thing that can be done.

Alas, the evil bits of Rand’s novels also seem to be coming true sometimes, as in the case of a judge who has forbidden Starbucks to close its failing tea-centered Teavana subsidiary shops. The judge argues that the stores closing would hurt shopping malls that would have to find new businesses to rent the spaces. Well, that’s how markets work. By the judge’s logic, should we all be forced to keep consuming frappuccinos if we’re ever tempted to stop patronizing Starbucks proper? (I’m not saying you’d really be able to see the difference from afar if Starbucks consumption became mandatory in America, but it’s the principle that matters. We’re caffeine addicts, not slaves.)

I know some people are tempted to see Donald Trump as a Randian figure—a businessman shrugging aside the political conventions of the day and all that. I think of him as less like a hero from the Fountainhead play and much more like one of the groundlings from Shakespeare’s day, the notoriously rude audience members, finally succeeding in rushing the stage and shouting remarks about the codpieces before security guards arrive. (This is a bit like what a couple of Trump’s stage-rushing political-activist fans did during a New York production of Julius Caesar that mocked Trump, in fact, as I wrote in a previous column.)

If you wanted your theater to blend with political reality with greater verisimilitude than Rand this season in New York, though, one option, written and produced by some of my fellow libertarians, was the play Ferguson, which used verbatim excerpts from the trial of the police officer who shot and killed Michael Brown, sparking the Ferguson riots three years ago. The real words of the trial—including those of at least one black female witness who said she doesn’t like cops but could still see that the officer was trying to defend himself and was left with little other choice than to shoot—put the audience in the potentially-awkward position of having to admit the jury got it right.

Luckily, the closest I’ve come to a racial conflagration lately in fairly sedate New York City was a visit to the lovely bar Summerhill BK, the white owner of which (named Becky) perhaps unwisely decided to decorate the place with an earthy local feel by putting fake bullet holes on one wall, holes later removed after much controversy. Some of the angry locals, feeling the bullet holes gave the neighborhood a bad rap, had gotten as far as debating what they’d do with the space after putting Summerhill out of business, as if you automatically get to claim the real estate spoils in the name of the community when you cause business havoc by flipping out politically. Summerhill remains.

Back on the stage, this year also brought my always-educational friend Jonathan Leaf’s latest political history play, The Fight, this time approximating the bad blood between feminist writers Gloria Steinem and Betty Friedan.

If you wanted to get away from politics while still getting a dose of DC, there was also Lynn Rosen’s Washed Up on the Potomac, about Washington-dwelling copy editors getting themselves so worked up arguing over whether one of their number had drowned in the river and if so how—murder? suicide? accident? not dead at all?—that the play was like a giddy postmodernist version of a manic upswing, all full of possibilities, some good and some horrible, with the uncertainty about which it was going to be almost dizzying, yet funny. Quit the job? Fly to France? New career? Die? Funny and frightening.

But if that’s still too close to politics for your tastes, for ample song and dance—including numbers by my (decidedly non-Randian) friends Francis Heaney and Lorinne Lampert—there’s still It Shoulda Been You. People haven’t forgotten how to sing and just have fun. I can’t help thinking someone needs to do an opera version of Atlas Shrugged, though.