The ACLU Has Blood on Its Hands in Charlottesville 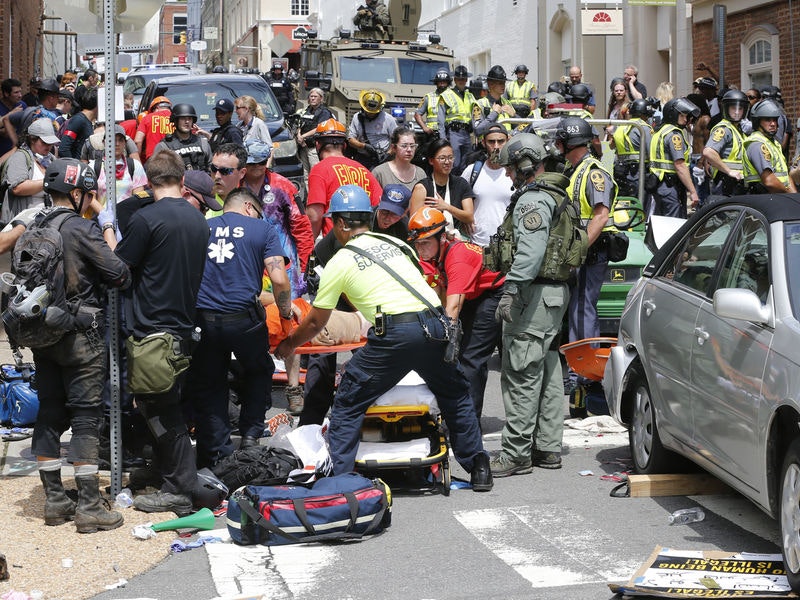 In August, white nationalists and neo-Nazis invaded the quiet town of Charlottesville, Virginia to protest plans to move a statue of Confederate general Robert E. Lee out of a downtown park. The police weren’t prepared to handle the chaos that occured, which led to the death of a 32-year-old counter-protesteer. Former U.S. Attorney Tim Heaphy was commissioned to review the situation, the results of which were released on Friday. His damning 200-page report points out that, while the alt-right protesters and the counter-protesters came prepared for violence, the Charlottesville Police Department and the Virginia State Police did not.

While there's no excuse for such police incompetence, there's more to this story than this new report captures. For some reason, Charlottesville Mayor Mike Signer decided to declare his city the “capital of the resistance” after the election of Donald Trump, perhaps unintentionally making it a target for far-right extremists looking for a place to stir things up, like they have in other leftist bastions such as Berkeley, California. When city leaders, for reasons of public safety and logistics, said they’d grant a permit for the planned Unite the Right protest only if it were held at another park about a mile away from the downtown Emancipation Park that the white nationalists wanted, the American Civil Liberties Union’s local affiliate successfully intervened, claiming that the protesters had a right to make their statement where the Lee statue stood.

Some compared the ACLU’s decision to side with neo-Nazis in Charlottesville to the organization’s defense, four decades earlier, of a neo-Nazi group’s march in Skokie, Illinois, which resulted in a landmark Supreme Court First Amendment decision. The philosophy behind that controversial move was that you defend your enemy's right to free speech now so it cannot be denied to your friends at a later time. There's merit to the idea, because civil rights demonstrators in the same era could’ve been shut down if their free speech rights were denied on the pretext of maintaining public order. However, only a few dozen members of the National Socialist Party were expected to show up in Skokie, whereas the numbers in Charlottesville were looking much higher and the certainty that counter protesters would come out en masse made violence a real possibility.

While citing public welfare can be a convenient means of circumventing the First Amendment, discounting the safety issue because you're an absolutist is irresponsible, especially when other options are available. The Charlottesville cops, even with state police help, were unequipped to handle the burden the ACLU forced upon it. It's unrealistic to expect that the police departments in other small cities have the experience and training necessary to handle a similar situation, so the ACLU must now take stock of what it's potentially creating the next time a racist organization asks for its help.

Charlottesville experienced one death by a vehicle-ramming attack, the deaths of two state troopers in a helicopter crash, and at least 38 non-fatal injuries. That's a big price to pay for upholding the right to a protest at a symbolically important spot near the densely populated downtown mall rather than moving it to a much safer venue where the neo-Nazis would’ve been free to chant anti-Semitic slogans.

The ACLU needs an honest self-assessment to realize it now has blood on its hands. In the wake of the Charlottesville disaster, the ACLU announced it’ll no longer represent white supremacist and nationalist groups demonstrating with guns, as happened in Charlottesville, but there were no guns involved in the Charlottesville deaths and injuries.

The ACLU’s in denial about its complicity in those deaths. It responded to criticism by releasing a statement that said, “Let's be clear: our lawsuit challenging the city to act constitutionally did not cause violence nor did it in any way address the question whether demonstrators could carry sticks or other weapons at the events."

It's time for new leadership at the ACLU. There's currently a blind allegiance to “timeless principles” at any cost—costs that aren't paid by the ACLU itself. If an alt-right group wants to come into a town, it's free to hire its own attorneys to stand up for its First Amendment rights. If the potential for violence exists and Nazis are clamoring for their constitutional rights, the ACLU can sit that battle out and still maintain its integrity. The group's actions in Charlottesville were self-indulgent and reckless. No outside group has any constitutional right to demand they be allowed to protest at a specific venue.