Big Soma Is Watching You

Our future will be “Huxwellian.” 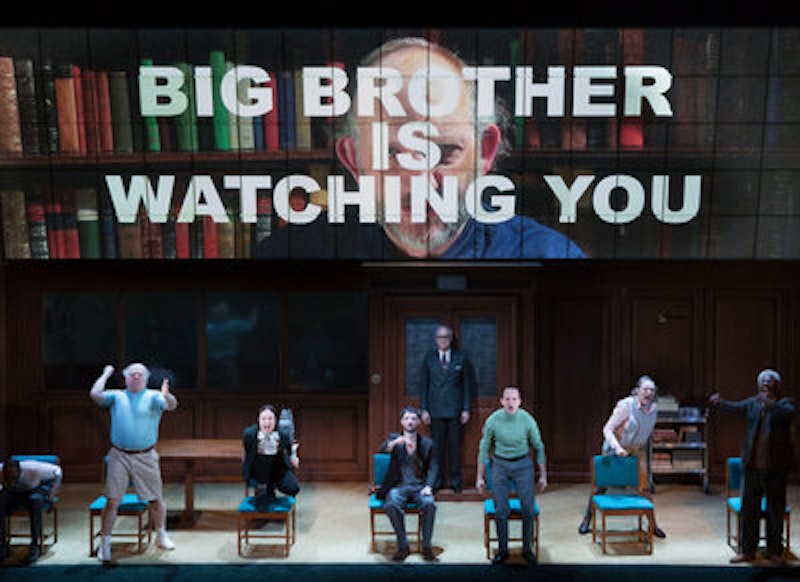 The current Broadway stage version of 1984 is not all that harrowing.

I hate to call Jennifer Lawrence wimpy—she liberated Panem, after all—but I think it’s odd that she vomited as a result of seeing the play’s torture scenes. Sure, they used a little fake blood, but beyond that the most powerful thing about the play was the highly effective use of harsh lighting and a few loud noises. It’s ironic that she vomits so easily given that she’s made headlines for saying she refuses to develop an eating disorder.

I should clarify that Lawrence isn’t in the play. She was merely in the audience once. Olivia Wilde was in the play—and the program handed out at the performance I saw mistakenly credits her with having appeared in the movie Tron as well, when surely we all remember she was only in the sequel Tron Legacy. Maybe history is being rewritten in Orwellian fashion. (The planned third Tron film was supposed to be more Matrix-like, so maybe they can address that idea in it.)

There was a suggestion at the beginning of the play that it would use the idea of revisionism in a meta-fictional way, with characters discussing Winston Smith’s diary and George Orwell’s novel interchangeably, each capable of being altered, with ramifications for the play unfolding right before our eyes. That’s clever, but the execution was more confusing than dramatic, and the conceit was dropped long before the sequence about the Ministry of Truth forcing Smith to deny basic mathematical facts came along.

I hate to sound unimpressed by any Orwell adaptation, though, since it’s so valuable to keep his message out there, especially at a time when both sides of the political spectrum, in their different ways, seem to be waging war against truth-telling. Political fanatics still recognize that Orwell is a threat to them. I recall the highly-politicized English class I took at Brown University, in which I cited Orwell’s “Politics and the English Language” as one of my favorite essays, and in response multiple fellow students condemned Orwell and the essay for being overly judgmental, insufficiently relativistic, and politically disempowering. How dare Orwell tell people not to use propaganda slogans?

The professor agreed. She would end each class with a call for “consensus,” followed by her own summary of the lesson upon which we had supposedly all agreed—despite the contentious issues just barely suppressed in the preceding classroom arguments. It was creepy. No one who went to Brown should wield political power.

Years later, though, out in the non-academic real world, I received a lesson that most of life would be less like an Orwell dystopia and more like a Ray Bradbury dystopia in that the truth would usually simply be forgotten rather than violently suppressed. I had a hippie-like co-worker who misremembered 1984 as a tale in which Smith was a heroic subjectivist who kept insisting that 2 + 2 can equal 5, even as the mean, narrow-minded Big Brother agent kept trying to tell him that 2 + 2 = 4. I hoped our other co-workers would see the alarming, multi-layered irony of this misreading and rewriting of literary/political history, but none of them remembered the scene one way or the other, it turned out.

Also, there are plenty of well-read people who haven’t forgotten their Orwell but who, like one communist friend of mine, seem to think the book is a warning only about right-wing totalitarianism, not left-wing totalitarianism, though Orwell clearly meant both. Nowadays, you can hardly blame people for thinking of right-wing wrongs first when they read it, I suppose, given the decade and a half of war propaganda, rationales for torture, and fights about police brutality we’ve lived through, not to mention the unsettling revelations about pervasive government surveillance.

It pains and embarrasses me now to think that just a decade ago, when William F. Buckley recommended his readers go see the film The Lives of Others, about the East German surveillance state during the Cold War, I still believed, as he did, that that sort of surveillance was a clear-cut example of a difference between our system and the kinds of freedom-suppressing systems our enemies construct. Now we know differently.

How is it that we go on so calmly even as the trap becomes more apparent all around us? I fear the answer is that just as our society is neither all government-run nor all market-based, it’s becoming neither fully Orwellian nor a fully hedonistic-utilitarian regime like that depicted in Aldous Huxley’s Brave New World. It’s becoming both at the same time—“Huxwellian,” as they say.

That is, instead of living as terrified prisoners or happy orgy-goers, we’ll find ourselves participating just enough in the systems of control around us to keep us contentedly docile, a dangerous and effective combo. So, much as I love capitalism and market efficiency, I think I’m allowed to be a little bit nervous about things like Disney’s new plan to use neural nets to monitor moviegoers’ facial reactions to films as they’re being watched, gauging moment-by-moment levels of pleasure or displeasure and no doubt algorithmically guiding future scriptwriters in response, perhaps someday even switching between multiple already-shot film endings in real time during screenings.

Changing entertainment in response to shifting fan preferences sounds far less dehumanizing than the Ministry of Truth’s rewrites of history, but the two can blend together. When a few vocal fans recently complained that a new Call of Duty videogame (about World War II soldiers in Europe) had too many white males in it, the game-makers reacted, and now the game also features black female Nazi soldiers. Is that an improvement, or is it insane? A column in USA Today likewise lamented the overwhelmingly white and male cast of Christopher Nolan’s Dunkirk, a movie almost entirely about German men killing English and French men in 1940.

Think how delighted the Ministry of Truth staff would be if they knew that popular demand could spur historical revisionism without the Party having to do a thing. Top it off with the growing movement of mystical believers who explain in YouTube videos that they think a so-called “Mandela Effect” is altering history itself—not just memories, but the fabric of the universe. They issue warnings about this every time they misremember a song lyric or misspell the name of a state capital (it can’t just be their own brains that are wrong). We’re getting very close to being a whole society that has decided it doesn’t need to remain tethered to reality after all. History may become “fan service,” just as TV reunion episodes or “because you demanded it!” comic book battles are.

We may have increasingly responsive-but-robotic markets and total states, with reality just melting away somewhere in between. Neither of those two forces can quite save you from the other, I now fear. I don’t happen to believe religion can do so either. Nor mere anarchy. Nor nature, that overrated brute.

It will take conscious thought and philosophical conviction on the part of strong individuals to keep society sane, to keep swimming against the tide when both force and freedom are rushing toward illusion.