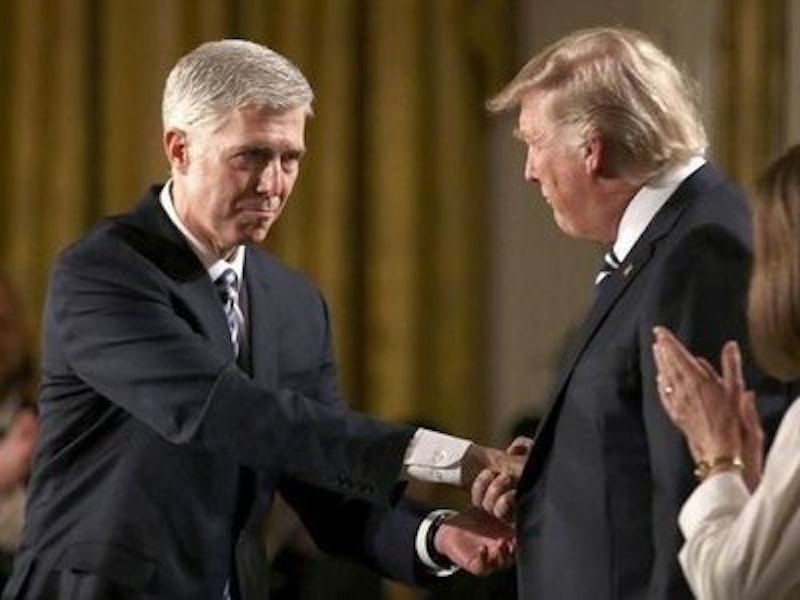 From the moment Neil Gorsuch joins the Supreme Court as its newest justice, Republicans will have taken total control of government—executive, legislative and judiciary—and in doing so compromised the delicate balance that each branch needs to slam the brakes on another. The takeover is also an avatar for future setbacks to liberal causes as well as a sorry end to bipartisanship in the U.S. Senate. All that is because of one man. It’s not so much anything that Gorsuch has done as what he stands for and how he came to a lifetime appointment to the U.S. Supreme Court.

Gorsuch, A-listed by President Donald Trump, stepped over the still-warm body of Judge Merrick Garland, who was nominated by President Barack Obama with 11 months remaining in his term. Republican Senators, led by Majority Leader Mitch McConnell, refused to grant Garland the courtesy of a hearing or a vote, claiming the appointment belonged to the incoming president. Democrats were resentful. Nineteen previous justices had been nominated, and confirmed, during the final year of a presidential term, a precedent as well as a courtesy.

Essentially, the filibuster was a negotiating instrument disguised as a threat. It was intended to encourage bipartisanship and its use, or the threat of it, was designed to compel Democrats and Republicans to reconcile their differences and reach accommodations, as necessary. The filibuster, no matter how messy and emotional, also maintained a background of civility in the Senate. The new arrangement of a simple majority eschews the need for negotiation. An issue—for now a Supreme Court nomination and all other presidential nominees, and later, perhaps, the budget or any other issue that’s sidelined—might be decided by a simple majority, now the party in control. Lack of the filibuster reduces the system to raw politics and the Darwinian simplicity of who has the votes and not what’s best for the country.

The cross-party feud was armed with spite. Democrats were fuming over the brusque treatment of Garland and the denial of Obama’s prerogative to nominate him. And Republicans were determined to pack the Supreme Court with conservative justices that would protect their mercantile interests and continue to roll back liberal advances on cultural issues. Gorsuch, at 49, will have a major impact on court decisions for generations. And with three more justices aging and in line for eventual replacement, the Republican Senate majority eased the way for confirmation with a vote of 51 of the party’s current roster of 52 senators. (Gorsuch’s advance was aided by three Democrats who face tough reelections in states that Trump carried.) The personal resumes of Garland and Gorsuch aside—both are Harvard Law School graduates and high achievers—in the judicial pecking order Garland ranked above Gorsuch. Garland is chief judge of the federal appeals court for the District of Columbia, which is the nation’s top appeals court and considered second only to the Supreme Court. Gorsuch is an appellate judge in Denver with broad respect but hardly the clearing-house for the complex appeals cases that land on Garland’s docket.

The most notable difference between the two, as argued by Democrats, is that Garland was strictly a man of the law and a non-controversial centrist in many of his rulings. But Gorsuch came to the bench by way of political activism. His mother was a Colorado legislator and later a Reagan appointee to the Environmental Protection Agency. Gorsuch worked in Republican political campaigns in Colorado and traveled to Florida in 2000 to assist the campaign of George W. Bush in the eventual poaching the presidency from Al Gore in the Supreme Court. Gorsuch’s rulings are said to heavily favor corporate and money interests.

Democrats were also put off during confirmation hearings by Gorsuch’s evasiveness and his refusal to answer even fundamental questions about existing law or issues that might hint at his political inclinations or how he might rule in the future. In fairness, this line of reasoning has become the standard testimony approach of judicial nominees who are coached to say that revealing any insight into their political leanings or legal thought might prejudice their cause.

The Supreme Court has only two functions: Interpret the Constitution, and review existing laws. Confirming Gorsuch restores the Supreme Court to its full complement of nine justices, filling the vacancy of Antonin Scalia, Gorsuch’s hero and role model and the justice he’s most compared to in attitude, style and approach to the law. Gorsuch, like Scalia, is an “originalist,” as in the men who wrote the Constitution meant what they wrote—word for literal word—at the time they wrote it. The opposite approach, favored by many liberals, contends that the Constitution is a living document, a framework open to interpretation and application by contemporary standards.

The philosophical breakdown of the eight sitting judges can often be foreseen but not safely predicted because of swing-voting and an occasionally downright breakaway renegade. The eight justices Gorsuch will be joining are: Chief Justice John Roberts Jr. and Justices Stephen Breyer, Elena Kagan, Sonia Sotomayor, Ruth Bader Ginsberg, Anthony Kennedy, Clarence Thomas, and Samuel Alito Jr. Kennedy is regarded as the reliably unpredictable swing vote. Gorsuch will fit comfortably with the conservative bloc that usually includes Roberts, Thomas and Alito. The addition of Gorsuch does not substantially alter the voting direction of the court that included Scalia. But the next appointment will swing the court decidedly in one direction or the other. Meantime, Gorsuch is considered a safe and solid conservative justice, and some say he will anchor the conservative bloc of justices.

Republicans rushed Gorsuch’s confirmation to be-robe him in time to participate in the final 13 cases of the court’s term before its summer adjournment in June. But immediately and down the line Gorsuch could have a sway on issues such as the death penalty, abortion, gun control, redistricting, voting rights, environmental regulations, transgender rights, religious liberty and presidential powers, to name a few.

The high court, in the past considered the staid, almost anonymous, third branch of government, has, in recent years, assumed a more important and highly visible role in indirect governance with direct authority. This is due largely to of the emergence of heretofore unforeseen or undetermined issues, the rise of cultural issues in society and the growing influence of money on Congress to advance special interest groups and legislation. (Remember Citizens United?) Court intervention often accelerates when Congress and the White House fail to perform adequately. Each side, conservative and liberal, accuses the court of judicial activism as it affects their agenda when, in fact, both extremes exploit the court to their advantage whenever they can.