A domestic victory for liberals, but Obama’s still bad on foreign policy. 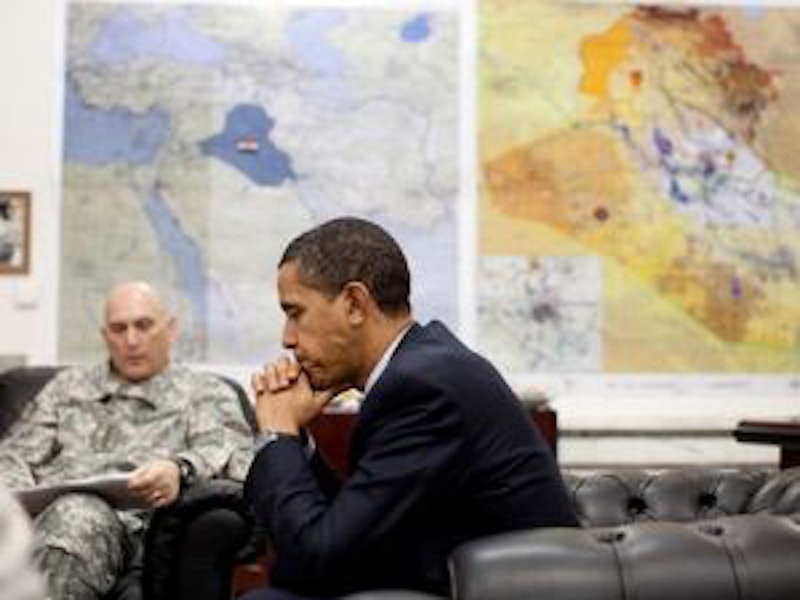 Like most liberals, I was relieved on Election Day. Tammy Duckworth, an Illinois Democrat who I've wanted to see in office for a long time got into the House. America now has its first openly lesbian Senator in Wisconsin’s Tammy Baldwin. Marriage equality won on the state ballot for the first time ever.  Elizabeth Warren won; the Democrats kept the Senate; the drug war received perhaps its most thorough setback ever at the polls. Obamacare is here to stay, which means that millions of the uninsured will be covered, and that economic devastation no longer awaits those who happen to fall ill. And, of course, Obama won, and Mitt Romney, that utterly duplicitous plutocrat walked off into retirement, where he can live out his days quietly with his wife and his tax deductions forevermore.

Lots of happy news. Some liberals have gone further, though, and foreseen in the election a permanent political realignment. The Republican reliance on old white folks has been shown to be demographically untenable; they must either change or accept the progressive consensus.  Jamelle Bouie euphorically compares Obama to FDR and LBJ. Greg Sargent insisted the election was a "a big choice by the American people—a big decision about the future direction of the country."

Obamacare is great, and I do believe that Romney would have tried to repeal it. But… it's worth remembering that originally Obamacare was a Republican bill; it's built on Romney's own ideas in Massachusetts. By all accounts, it works pretty well there. But when Republicans are declaring a Heritage Foundation initiative to be a sign of tyrannical apocalypse, it makes you worry about how demented they'll really get before that promised realignment comes along.

At least Obamacare really is an advance, though. In foreign policy, there is no advance, and, no "big choice."  During their foreign affairs debate, Romney and Obama disagreed on pretty much nothing of substance. Romney called for more symbolic bellicosity, but his actual strategic differences with the President were few.

This isn't some triumph of progressive ideology. Rather, it's a sign that Obama has moved so far to the right on security issues that there's little space left for the Republicans to maneuver. Obama drops bombs on Pakistani civilian and puts whistleblowers in solitary confinement, and all the Republicans can suggest is that he should maybe kill more civilians and kick those whistleblowers a bit harder before he slams the door.

The election has ensconced some progressive ideas and priorities, but it's also true that the election has fastened less progressive ideas even more firmly. Just as it took a Bill Clinton to shred welfare and financial service regulation, so has it taken a Barack Obama to codify assassination, paranoid civil liberties violations, and a permanent "war on terror" beyond the reach of partisan objection—or even really partisan discussion.

I've seen some liberal pundits express hope that Obama will wind down the drone war now that he's been reelected and doesn't need to protect his right flank. Anything is possible I suppose. But I didn't think Romney would suddenly balance the budget after running on profligate promises, and I very much doubt that Obama is suddenly going to stop killing Pakistanis halfway across the world after running a campaign in which the status quo use of drones was far from a liability. Maybe Obama has transformed American politics. But the way he has most assuredly transformed them is by making endless covert war the permanent ideology of both major parties. It will be a long time until we see another Democrat run on an even provisionally anti-war platform, as Obama did in 2008. For liberals, that hardly seems like something to cheer about.