Hint: It will not be very traditional. 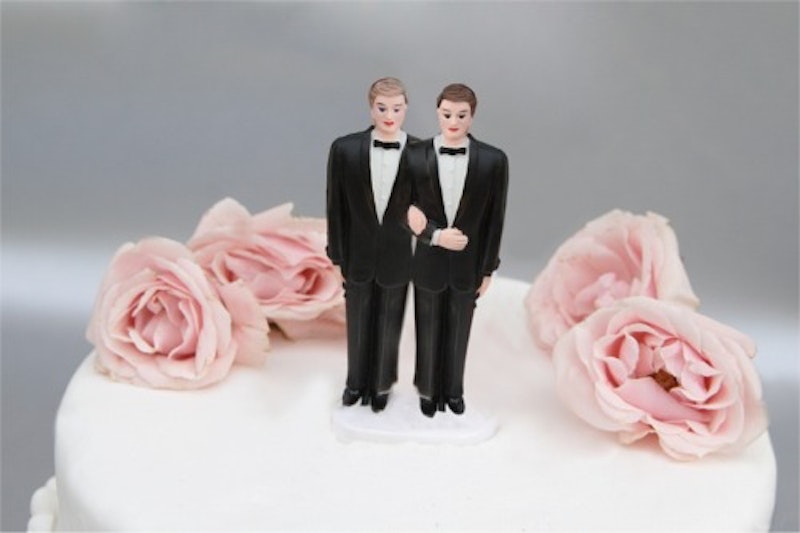 New York Gov. Andrew Cuomo, who is very heterosexual, made a fuss about how committed he was to Marriage Equality. Throughout his gubernatorial campaign, gay marriage was one of his top priorities. And he wasn’t lying: Gay Pride New York kicked off last weekend with the signing of the Marriage Equality Act. By the way, why wasn’t New York the first state with gay marriage? Anyway, New York Marriage Equality tiptoed through a Republican controlled senate with a vote of 33 to 29. This is great news for all New York gays, but I’m really excited because it means I can now finally marry into money and send my kid to Dalton for pre-, pre-, pre-school, where they will obviously be accepted to add “diversity”!

I usually avoid Gay Pride because I don’t really like to be out in the sun for extended periods of time surrounded by drunken assholes with rainbows painted all over their faces. But as I stood on the corner of 14th St. and 5th Ave., I noticed that this Pride was a little different. It never really got too sunny or too hot. Most of all, the collective emotion in the air was that finally, finally, we have gay marriage in this motherfucking state.

Pride can often feel like a gay-themed commercialized business expo. Almost every city on the planet has a “Pride Festival,” (Toronto Pride starts today), and all they really amount to is tourism, marketing, and shopping. Come have Pride with US so you can stay in our fabulous hotels and shop and drink Belvedere! Vendors sell the idea of “Pride” without anything political to show for it. But this time, right there on 5th Ave., we were proud that in just 29 more days Shaquandra and Monifah, and Juan Carlos and Benjamin will have the right to tie the knot—kind of boring, but also kind of not.   Seeing as how getting gay-married was basically illegal my whole life until just now, I’ve always scoffed at weddings, half because a lot of them are really cheesy—like straight up Camembert— and half because I couldn’t have one of my own. Never really gave it much thought. So now that gay marriage is very legal, I’m kind of turned on by what my wedding, a Madison Moore Wedding, would be like.

First of all, I would never get married by a priest or a rabbi. This is not Carrie Bradshaw in Sex and the City. Instead, I want frickin’ Daphne Guinness to greet us at the altar in some kind of fabulous, incomprehensible couture object and accompanying headpiece. Wait! I want the whole audience to be a sea of headpieces. Fruit. Birds. Candy. Lampshades. Pillows. You know how some weddings require you to wear a certain color? Fuck that—I’d just assign everybody a different headpiece!

And I wouldn’t wear a tuxedo or a dress. I don’t really love tuxedos and wearing a dress would be way too gay and bride-y, so obviously we can’t have that. I want a gold, sequined-out, strong-shouldered Balmain jacket, no shirt, just two black pasties over my nipples, rings on every finger, a pair of skinny black PVC pants, a red plug in one of my ears and a long chandelier earring in the other, and the patent leather Yves Saint Laurent Johnny Boot. Worrrrk!

And I want Nina Garcia, Heidi Klum, and Michael Kors to be sitting off to the side watching, commenting, and writing little notes on hot pink index cards. Maybe Nina makes a face, maybe Michael rolls his eyes. There’s some whispering going on. All this while models come in and out of backstage, circling the whole ceremony as Philip Glass just barely hums in the background.

And it would be really cool if at the end of the ceremony, after kissing (or handjobbing!) the groom, everybody shot out of their mirrored light-up chairs. The lights would instantly black out and a DJ, perhaps James Murphy from LCD Soundsystem, would start spinning some crazy shit, and then Janelle Monae would perform “Tightrope,” because I guess marriages are kind of like walking on tightropes or whatever so that takes care of the symbolism. The reception would just like immediately go and we would eat and dance—carefully because of the headpieces, though!