The center of our nation's military-industrial complex. 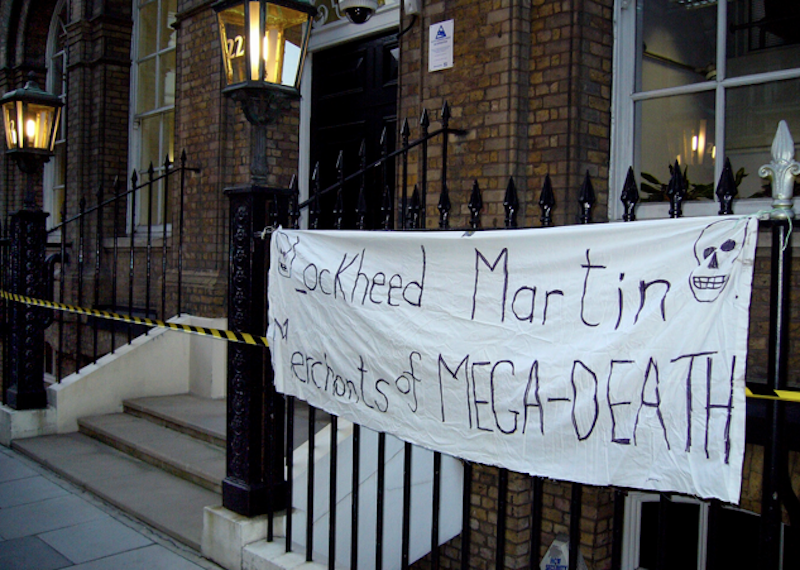 The sad truth about unfettered capitalism is that it is a revolutionary force, as Marx understood, that invariably devolves into a dangerous form of corporate socialism without regulations. Big corporations become so powerful that they create monopolies over their industries and accrue extraordinary control over the government. Their exorbitant wealth and power enables them to buy out competitors and pay off Congressmen through massive campaign contributions and lobbying efforts to subsidize their business and ignore criminal conduct.

One company that exemplifies this paradigm is Lockheed Martin, the biggest weapons contractor in the world, as William D. Hartung, director of the Arms and Security Initiative at the New America Foundation, explains in his book Prophets of War, Lockheed Martin and the Making of the Military-Industrial Complex. Lockheed Martin is “the nation’s top government contractor, with $36 billion in federal contracts in 2008 alone,” of which $29 billion came from the Pentagon, according to Hartung. This “comes to roughly $260 per paying household,” or a “Lockheed Martin tax.” Accordingly, the scope of its power is enormous, as the company has its hand in virtually every aspect of government, to which we will return.

A crucial way in which it has attained such power is through lobbying and campaign contributions, on which it spent $15 million in 2009 alone. It played a leading role in the post-World War II effort to create a permanent military budget by persuading Congress that it would be in the nation’s best interest to subsidize contractors at all times. During the 80s there was some controversy over the C-5B lobbying campaign. Those who lobbied to ensure funding for this new generation of fighter planes included the Pentagon, Air Force, Lockheed and its subcontractors, President Reagan, Senate Majority Leader Howard Baker, Secretary of the Air Force Verne Orr, and many others.

The only thing unusual about this campaign was that the General Accounting Office (GAO) issued a report calling for investigations of criminal violations of laws restricting executive branch officials from lobbying. Of course it was ignored. This was, in the words of whistleblower Ernie Fitzgerald, like “asking the King’s lawyers to prosecute the King’s men for doing the King’s business.” Indeed, this kind of lobbying activity occurs every year, according to Hartung:

“All the same elements are present when other weapons systems are up for debate: Industry and Pentagon lobbyists swarm Capitol Hill; pressure is ratcheted up on members of the Armed Services and Defense Appropriations Committees in the House and Senate, many of whom have had key defense production facilities placed in their states or districts; key members receive generous political contributions from the producer of the weapons system and its subcontractors… and official reports and testimony are created that make a one-sided case for the weapon system in question.”

This extraordinary power comes from the revolving door phenomenon. A 1969 report found that “over 2,000 military officers had gone to work for major defense contractors,” 210 of which went to Lockheed. The dangers were described by Sen. William Proxmire: “The easy movement of high ranking military officers into jobs with major defense contractors and the reverse movement of top executives in major defense contractors into high Pentagon jobs is solid evidence of the military-industrial complex in operation. It is a real threat to the public interest because it increases the chances of abuse… How hard a bargain will officers involved in procurement planning or specifications drive when they are one or two years from retirement and have the example to look at of over 2,000 fellow officers doing well on the outside after retirement?” This phenomenon is strikingly similar to how the SEC operates. The Madoff scandal, for example, revealed how investigators have strong incentives to look the other way because they know Wall Street jobs are waiting for them once they leave the SEC.

The government’s relationship with the military-industrial complex mirrors that of Wall Street in many ways. We’ve been led to believe that the notorious Wall Street bailouts of 2008-9 are unique. They are not. As the story of Lockheed Martin illustrates, after meltdowns, powerful corporations are often saved by Uncle Sam. During World War I, the “cost-plus contracts” business model was established. Under this arrangement, a given company would have “all of its expenses reimbursed and then receive an automatic profit on top of that,” Hartung explains. Decades later the industry created the Total Package Procurement (TPP) contract, which allowed contractors to project prices many years down the road, enabling them to bid low and win Pentagon contracts and then jack up the prices by hundreds of millions or billions once they reached the final cost of the system years later. The corporations receive fines for such activity, but they amount to pocket change.

These arrangements, combined with lack of oversight and accountability, have paved the way for massive abuse and corruption. During the 70s the C-5A model was a miserable failure, experiencing 25 defects, including landing gear problems and a flawed radar system. The project incurred a record $2 billion cost overrun that threatened to destroy Lockheed Martin. But the company was eventually bailed out after farcical Congressional debates; President Nixon supported firing whistleblower Fitzgerald for “not taking orders” by exposing the cost overruns. The company was simply too big to fail: Deputy Secretary of Defense David Packard declared that Lockheed’s “operations are so intertwined with other companies which also contribute to our national defense that it was necessary to consider a chain reaction upon other companies as well.” As Hartung says, in those days $2 billion was equal to “over twice what the federal government was then spending on low- and moderate-income households and almost as much as Washington spent annually on elementary and secondary education.”

The Pentagon tolerates Lockheed’s incompetence because it has a symbiotic relationship with top contractors in which each depends on the other for its survival—corporations rely on the Pentagon for contracts, and the Pentagon uses them to ensure that it always has a supply of factories to build newer weapons technology. This has produced tragic results, such as the crashing of a plane in Vietnam that killed over 90 people, many of whom were women and children being evacuated. Furthermore, in the Yom Kippur War of 1973, many of the weapons America sent to Israel did not work.

More broadly, overseas sales comprise a huge part of Lockheed’s business. They are even more lucrative than domestic sales because the weapons they export have already been developed at the tax payers’ expense, the “bugs” have been worked out after years of sales to the Pentagon, and contractors can charge whatever the market will bear and profit further from maintenance and upgrades. Lockheed has bribed government officials in many different countries, causing a huge scandal in Japan in one instance.  During the 90s, after completing the biggest of all the roughly 20 mergers executed during its existence, Lockheed convinced the Clinton administration to create a $15 billion fund of low interest rate loans backed by the U.S. government for sales to arms-purchasing nations. Participants include Turkey, Israel, Germany, Britain, Romania, Poland, etc. Lockheed has secured deals with some Eastern European countries by influencing Washington to include these nations in NATO.

The consequences have been horrific, all over the world. In a further illustration of Marx’s maxim that capitalism is a revolutionary force, the free-flowing nature of arms deals has made many countries trigger-happy, such as Israel and Turkey, which have murdered and tortured Palestinians and Kurds with weapons paid for by your tax dollars. Similarly, many top-level positions in the Bush administration were filled with Lockheed employees who played a major role in pushing for the Iraq war, from which the company greatly benefitted.

Lockheed has a role in virtually every aspect of government. It supplies intelligence in Afghanistan and Pakistan for logistics and drone strikes; it reaps billions from missile defense and militarization of space programs, which have expanded under Obama; it helped write the Afghan Constitution; it won a contract for a UN peacekeeping mission in Darfur; it hired interrogators in Abu Ghraib and Guantanamo; it trains TSA employees and provides them with devices to detect explosives; it spies on American citizens by collecting information and building systems for TALON, TIA and NSA programs; it supplies the FBI with technology that stores fingerprint and DNA samples of 55 million Americans; it developed a mechanism for the IRS that processes your tax forms and assembles data on all interactions between taxpayers and the IRS; and it has created a system that allows people to answer census questions over the Internet.