Obama gets tough on Congress and the economy. 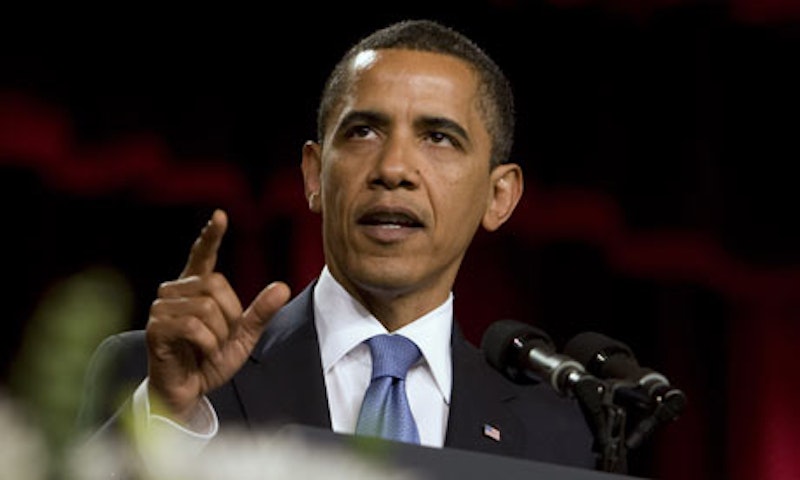 President Barack Obama, intentionally or accidentally, has underlined the notion that politics can be reduced to personal pronouns: When Democrats speak they say “we” and “us.” And when Republicans talk they say “I” and “me.” An unusually feisty Obama parsed the difference between parties and payrolls when he mocked the GOP’s extortionate budget-cutting strategy in an effort to nudge Congress toward reconciling the debt limit crisis. In doing so, Obama lampooned Congress for taking too many vacations, said his two children have a better work ethic than Congress and compared the needs of kids with those of corporate jet owners—a half dozen times.

Obama also implicitly suggested that he has learned the lesson that cost Lyndon Johnson the presidency and drove him from the White House: It’s foolhardy to attempt financing a war at home and a war abroad at the same time. Johnson had one war; Obama has three. To prop up the economy while he waged the war in Vietnam and a war on poverty in America, Johnson instituted a10 percent surtax on incomes. To accomplish very much the same thing, Obama is proposing increasing taxes (directly and indirectly) to fight the recession at home and three wars abroad—Afghanistan, Iraq and Libya—two of which he inherited and one that he refuses to admit is a war. Cost has now become a key factor in continuing the wars abroad.

The stark contrast between rich and poor (or middle class) taps into one of the emerging grand themes of the presidential political season—the growing disparity in the distribution of wealth between those at the top and those at the bottom wherein most of the wealth went to the top two percent while the bottom 50 percent has actually lost income. Obama planted his flag and staked his populist claim against a backdrop of Republicans’ stubborn refusal to raise taxes on the wealthy to help solve the nation’s long-term debt problem. Obama repeated his attack during his weekly radio broadcast by accusing Republicans of being protectors of the wealthy. Only the week before, House Majority Leader Eric Cantor, of Virginia, walked out of the budget deliberations, giving Obama the leverage and the opportunity to present Republicans as obstructionists who refuse to negotiate in good faith while the nation drowns in debt. The evolving campaign theme is: Wall Street vs. Main Street, them vs. us, who’s side are you on. There’s a clear choice. Obama has laid down the beginnings of a scorched-earth policy—if it becomes necessary to win reelection. The state of Minnesota has shut down over the very same no-tax standoff.

Obama chided Congress for being on vacation as often as it shows up for work. “They’re in one week, they’re out one week… They need to do their jobs,” he said. “You need to be here. I’ve been here. I’ve been doing Afghanistan and bin Laden and the Greek crisis.” And here he interjected that his daughters Malia and Sasha have displayed more diligence with their homework than Congress has with the budget. “They’re not pulling all-nighters. They’re 13 and 10. Congress can do the same thing. If you know you’ve got to do something, just do it.” (The next day, the Senate cancelled its holiday recess.)

Obama challenged Republicans to ask their constituents if they “are willing to compromise their kids’ safety so that some corporate jet owner continues to get a tax break? I’m pretty sure what the answer would be” And again: “The tax cuts I’m proposing we get rid of are tax breaks for millionaires and billionaires, tax breaks for oil companies and hedge-fund managers and corporate jet owners. I think it would be hard for the Republicans to stand there and say that ‘the tax break for corporate jets is sufficiently important that we’re not willing to come to the table’.” The imagery is vivid and powerful. Republicans call it class warfare. The tradeoff: Obama has offered to cut $2 trillion in spending.

Right now, the wealthiest Americans are enjoying the lowest tax rates since the 1950s. The tax rates were cut twice by President George W. Bush in 2001 and 2003 and were intended, following pure Republican orthodoxy, to stimulate the economy on the theory that the money would be invested in plant expansion and job creation. It had the opposite effect. Studies have shown that the eight years of the Bush presidency had the lowest growth rate in the economy of any eight-year period since World War II. Bush also raised the debt ceiling seven times in eight years. Obama’s position, and that of many Democrats, has been to return to the tax rates of the President Bill Clinton era of the 1990s which, by contrast to the Bush years, experienced a booming economy and one of the highest rates of economic expansion since the 1950s.

But the competing sides and philosophies are deadlocked over taxes. Republicans have repeatedly refused to budge. Republican lawmakers are in a curious position. They take an oath to support the Constitution and many of them take a second pledge not to raise taxes, called the “Taxpayer Protection Pledge,” under the patrimony of Grover Norquist, head of Americans for Tax Reform, an advocacy group that opposes any tax increases whatsoever. Norquist also considers elimination of tax breaks for the wealthy a de facto tax increase. The hammer Norquist holds over lawmakers is a mailing list of like-minded conservatives all over the country and the ear of wealthy contributors such as the Koch brothers, conservative billionaire businessmen, who help fund campaigns and anti-tax causes. Republican members of Congress are also beholden, out of fear, to the Tea Party which has essentially hijacked the election-day machinery of the GOP.

The artificial and moveable deadline for increasing the debt ceiling, intertwined with debt-reduction talks, is August 2. Unless the limit is adjusted upward, so the argument goes, America will lose its borrowing power and be unable to pay its bills. The earlier May deadline had been extended through a series of gimmicks that allowed the treasury to continue meeting its obligations. And that may have been Obama’s great mistake. Washington is a company town. Its only product is itself. Detroit manufactures cars. Wilmington manufactures chemicals. Washington manufactures itself. Washington is also a town where work expands to fill available time. Put another way, Congress—any legislative body, for that matter—will consume as much time as it’s given to get a job done.

The rare appearance of Obama as scolder in-chief was a deliberate strategy by the President to re-assert himself as a leader on the economic issues that the nation confronts at a time when he has been sidetracked by events and home and abroad as well as the attention on the growing roster of Republican presidential candidates. He seemed to be saying that he’d had enough of Republican posturing and theater of the absurd. For emphasis, Obama declined a GOP invitation to Capital Hill—which they knew he would—and took off for a fundraiser in Philadelphia instead. It’s about time Obama got tough and pushed back. Less basketball, more hardball.