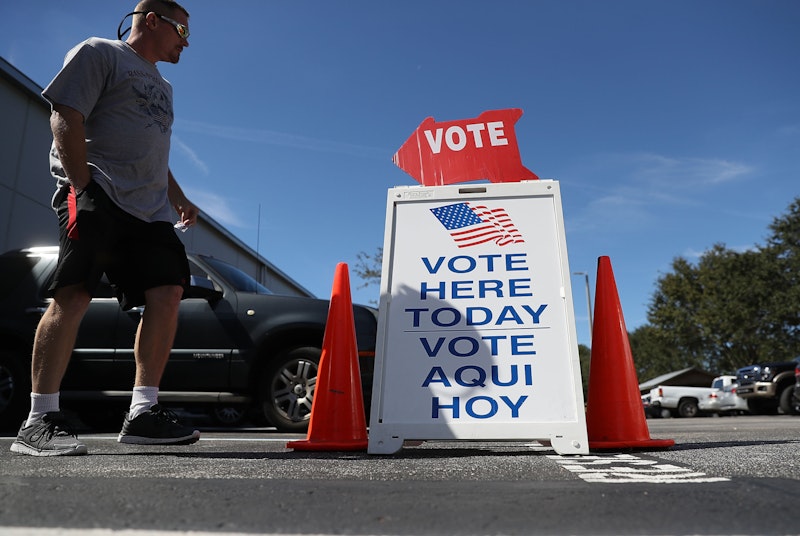 It's Tuesday morning in America: out here in rural Pennsylvania, I'm still undecided. I may vote for Gary Johnson. I may write someone in. I may just stay home and snicker at my nation. There is pleasure in that, and we are indeed a nation of people with the political imagination and intelligence of clock radios; Christ, did you read The New York Times op-ed page this year? I do remind you that it’s the sacred right of all Americans not to vote, until we have something to vote for.

Americans, it’s sometimes said by panderers, deserve better. I'm not sure what a wildly various group of 300 million people might deserve collectively, or even what that could possibly mean. However, I intuit that if any of that could be clarified, it would turn out that we are getting precisely what we deserve. And maybe I deserve it. I've made a lot of moral “mistakes” in my time, though not as many or as disastrous for other people as Hillary Clinton or Donald Trump's, but then I haven't been in a position to do their kind of harm.

If you vote for Clinton or Trump, you’ll personally deserve what happens after that, though you’ll have only an infinitesimal responsibility for it, especially as the situation was created more by stacks of cash than human beings.

In particular, if you—like Beyoncé or Lena Dunham—actually managed to simulate enthusiasm for Hillary in public, you're going to deserve the most scandal-plagued, self-serving, unprincipled, and cosmically meaningless administration since Richard Nixon's. I’m going to require you to be enthusiastic about that too. Clinton is a woman, though, one who rose to power through her husband.

Astonishingly, I’ve toyed with voting for her if the polling in PA is tight, because as much as I loathe the sort of politician Hillary is, I can't swallow Trump’s deportation, wall, or the shove-you-in-a-closet-and-grope-you thing. I like what he said about John McCain, though.

I often vote libertarian because of my distaste for extreme hierarchies of power, wealth, and prestige, such as those that the Democratic and Republican parties embody so pointedly. But Gary Johnson and Bill Weld have, like my very nation, disappointed me in various respects, and I’ve been slowly forced to the conclusion that Johnson is extremely unimpressive.

Thus, if indeed I do screw up the perverse useless energy to vote, I'm down to contemplating whom to write in. I guess it has to be an American. I thought it might be good to write in a black woman, but Barbara Jordan is dead, and Beyoncé, Shonda Rhymes, or Michelle Obama would just turn the thing back over to Hillary for some reason, perhaps a deep-seated commitment to her own suffering. Or perhaps they just love mass incarceration and high-rise housing projects.

There's always Mickey Mouse or, much better, my role model Daffy Duck. They seem kind of two-dimensional, though. I thought of writing in an anarchist, maybe Noam Chomsky or David Graeber: that would be fun, and at least I'd know that I hadn't cast my vote for some enthusiast for oppression. Still, it somehow doesn’t satisfy, perhaps because they’d refuse to serve.