A Biography for Every Founding Father 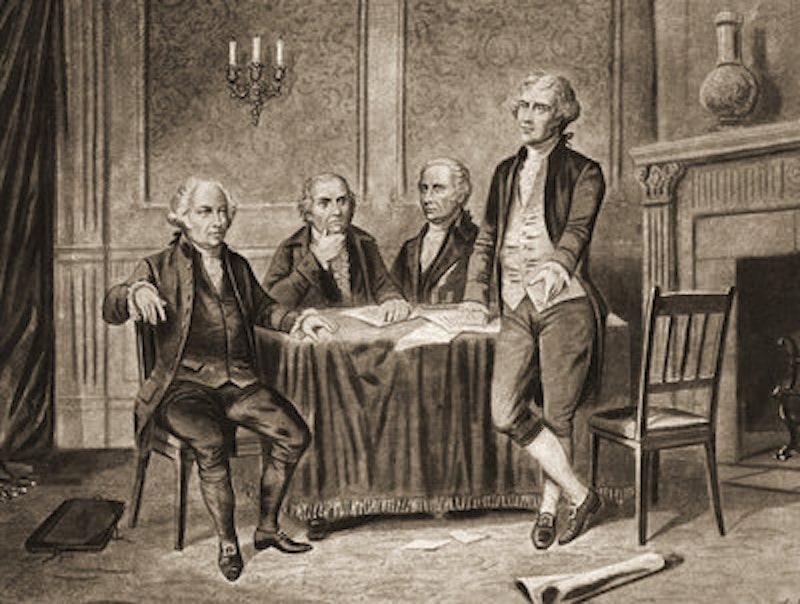 Nobody cares about old white men these days—or so the anti-PC lobby would have you believe. One of my work-for-hire jobs is writing summaries of bestsellers, though, and I’ll tell you: based on consumer nonfiction preferences, old white guys are all the rage.

I've read lots of self-help books for this job, but what I keep getting assigned are biographies. Big, honking biographies, with white guy faces on them. Washington. Adams. Hamilton. Jefferson. Grant. Churchill. These are serious names, for serious men, who did serious things, packaged for serious readers who want to learn about history seriously.

Serious history is long—all the books clock in at somewhere between 500 and 800 pages. But it isn't very critical. People who pick up Ron Chernow's biography of Hamilton are presumably people who like Hamilton; they don't necessarily want to read that he was an erratic war-mongering authoritarian jerk.  Similarly, if you pick up Jon Meacham's Thomas Jefferson: The Art of Power, you're not looking to read about how Jefferson was an overrated duplicitous sleaze who uselessly obstructed while Hamilton forged the union for posterity. And so, sure enough, the book about Hamilton is all about how influential Hamilton was, and the book about Jefferson is about how influential he was. Each biography is a mammoth endorsement. "His remarkable rise constitutes one of the greatest stories of American leadership," Ronald C. White enthuses in American Ulysses: A Life of Ulysses S. Grant. "A man capable of constant self-improvement, Washington grew in stature throughout his life," Ron Chernow declares in Washington: A Life, and adds that Washington was the "most interior of the founders." What does that mean, you ask? Who cares? You get the point: Washington was the best.

Not that the biographies erase all faults. On the contrary, faults are important. They make the subjects complex and fascinating, all the better to further appreciate them. Chernow presents Washington as having a strong temper, which he had to control all his life. Hamilton fortuitously committed adultery, which is always good for adding flavor and interest to a portrait without distracting from the hero's essential heroism. David McCullough's John Adams acknowledges its protagonist’s inflexibility and irascibility. Meacham talks about Jefferson's relationship with Sally Hemings, and his political hypocrisy and opportunism. But, he assures us, "in Jefferson's mind he was doing the right thing the right way"—an excuse, if you could call it that, which could be used by anybody for anything.

The hagiography-with-flaws approach lends itself to such empty excuses. It turns history into a contest to see who's the greatest founding father. As a result, all these books avoid the most interesting questions about the past. Was the American Revolution justified—or to put it another way, how much bloodshed is a tax increase worth? What does liberty mean in a slaveholding country? What did people, white and black, think the Civil War was about, and how did that change over the course of the war itself? History turns into a bland encomium to the increasing stature of some white guy who made us what we are today. As a result there's never a chance to question, or even think about, where we are, or where we were.

Presumably that's the point. Ultimately, these biographies aren't really much different from those self-help books. Jefferson, Adams, Washington, Hamilton, Grant—they were great, and they built America, and we're Americans, so we're great too. Biographies are prepared to validate you at length—always provided you feel validated by white guys.