Flashbacks to 2004—and Brexit—as Trump triumphs in cataclysmic upset. 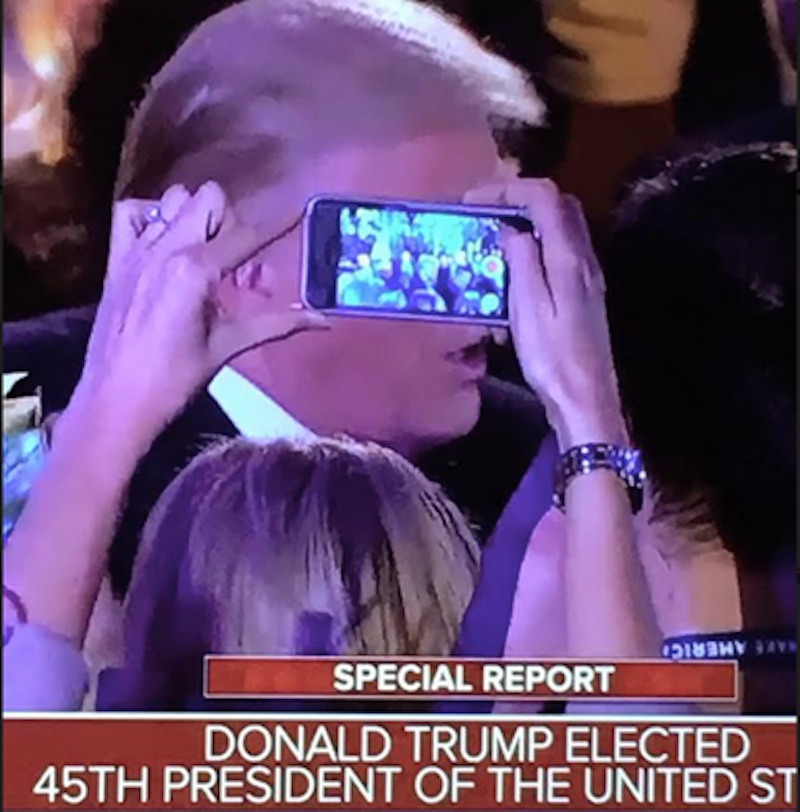 Change of plans. I didn’t expect to be writing something like this. Everything started to turn around 9:30 p.m., and I started getting nervous. Then my vision started closing in. Low-level anxiety blooming into the reality of even considering a President-Elect Trump. Around 3 a.m. John Podesta came out for Hillary Clinton and told everyone to go home. They weren’t prepared for this, and neither were we. Celebrities like Lady Gaga, Cher, and Katy Perry crying backstage at the Javits Center. Of course we’d all be screaming at Trump if he refused to concede the race at this point, and a little after 3, Clinton called Trump to concede. What can you say that Van Jones or Corey Lewandowski haven’t already repeated 100 times? Peggy Noonan is right: this is a seismic, epochal moment, and the future looks totally blank. I’ve no idea what's going to happen next or what horrors are around the corner.

Trump’s acceptance speech was shockingly conciliatory and optimistic. It was as if he’d just tripped shrooms for the first time and experienced ego death. He sounded at peace, narcotic. But ego death and ego ascension aren’t that different. He’s a winner, a man whose brain is pumping out dopamine and serotonin at absurd levels, totally overloaded. His speech wasn’t vindictive or bragging—he sounded like a man about to die, or someone that just came out of a life-threatening coma. And all the vermin around him smiling ear to ear: Mike Pence and Rudy Giuliani in particular, the former a vicious homophobe who caused massive unnecessary outbreaks of HIV in his home state of Indiana, the latter a fallen angel turned golem. Trump the scarecrow.

I’ve seen a lot of people shout “Not my President” to their friends and followers tonight, and after eight years of Republicans questioning President Obama’s legitimacy, I blanch just a bit seeing half the whole country mirror that. Just as Obama’s election was an affront to whiteness and paranoid xenophobes and all the upper middle class shy voters in between, Trump is a national embarrassment and a horror for all the reasons you already know. It’s not a question of which reality is correct or more valid—the problem is that we’re a country operating on the basis of two diametrically opposed realities that bear little resemblance to each other. When Nate Silver is chided for giving Clinton odds in the mid-70s on Election Day, and The New York Times had her hovering above 90 percent for weeks at a time, and this happens, something’s askew. By every metric of the old guard, Hillary Clinton was the most qualified person to run for president in decades, and Trump, the least qualified. The shadow Trump vote showed up. It doesn’t matter if some depressed Bernouts stayed home—it was those shy Trump voters that tipped it.

With the GOP in control of the presidency and Congress, the future looks bleak. No one knows what Trump will do or whom he will appoint, and I’d bet neither does he. Forgive me for popping an extra Klonopin tonight and in the weeks to come.