Every Man Is a Potential Assailant 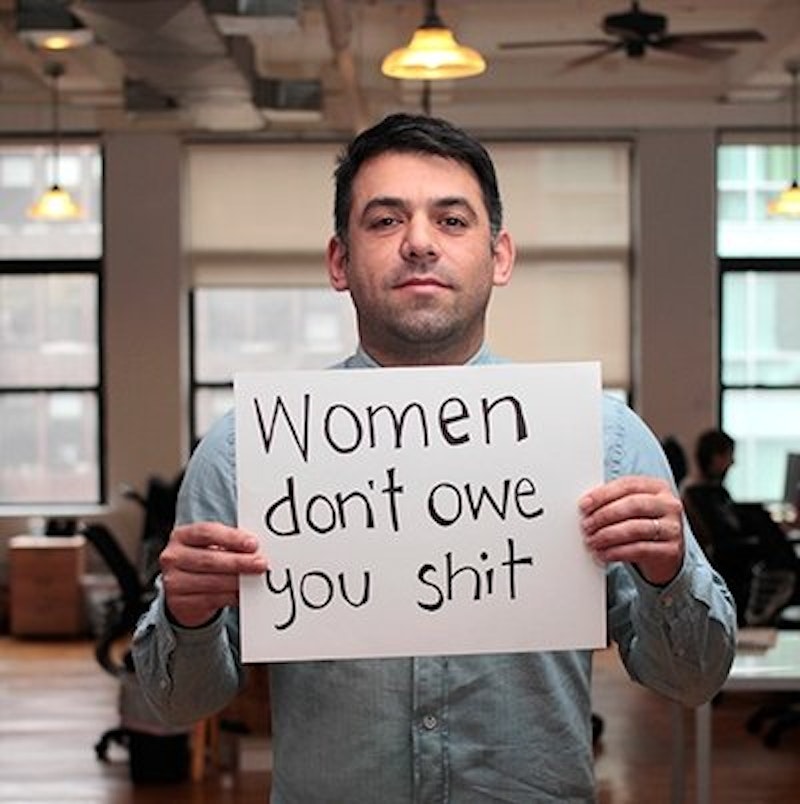 The “not all men” response to the criticisms of men offered by modern, intersectional feminism is the object of much scorn within the movement. It's seen as a cynical or self-serving way to shift the conversation away from the depredations women receive at the hands of men, as opposed to a natural reaction from people who may feel they’re being stereotyped by being lumped in with people they have no more in common with than gender.

Melissa A. Fabello and Aaminah Khan take on this bugaboo in their recent article in Everyday Feminism, “Think It’s #NotAllMen? These 4 Facts Prove You’re Just Plain Wrong.” To a publication that fashions itself as an intersectional feminist “educational” media outlet, the entire complex dynamic between the sexes is seen in simple black and white terms, as indicated by the title of the piece. No debate is necessary (or allowed) when you have four crucial facts on hand.

The article is addressed to “well-meaning men who believe themselves to be safe.” Those so deep in their delusions that they're blissfully unaware that every man isn't a threat. The authors offer up a sop to all the non-predatory men with, “We don’t think that all men are inherently abusive or dangerous. Plenty of men aren’t.” Then, “Not every man has violated us individually,” as if that's actually an issue that needs to be clarified, or they should be congratulated for being so forthcoming.

But Fabello and Khan pull the olive branch back quickly, explaining that the patriarchy-driven socialization process is so heinous, so uncompromisingly misogynistic, that even the good eggs—the supportive, the trustful, the respectful men they assure us exist—are capable of shedding their benign exteriors at any moment and visiting harm upon women.

The world of Everyday Feminism is a dystopian one divided into the oppressed and the oppressors, despite the fact that the world they actually inhabit is comfortable middle-class America. So obsessed are they with The Patriarchy and its unrelenting oppression that they equate their suffering as being on par with women in Third World nations—women who could never dare even hope for a college education or a modicum of independence.

So deep is their self-pity and alarmism—perhaps even bigotry—as to evoke this from the co-writers: “So when you enter a space—any space—as a man, you carry with yourself the threat of harm.” When you walk into a church for your weekly devotions there's always that chance you'll be sending one or more of your fellow worshipers to meet their maker sooner than they’d planned.

The way it works, according to this article, is if you use the phrase “not all men,” or if you at least buy into the delusion in any way that not all men are potential assailants, you're contributing to the socially accepted “violence of masculinity.” Fabello and Khan assure readers that they're not really talking about individual men. When they say, “men are horrible,” as they explain, they really mean The Patriarchy. “Men” is just a “linguistic shortcut” they use to illustrate the concept.

Imagine if another group progressives identify, along with women, as victims—Muslims—were the topic at hand. “Not all Muslims are like that” is the standard response from regressive leftists like the authors in reply to any critique of Islam, even when it's the ideology of Islam being addressed, not individual Muslims. Charges of racism and Islamophobia are sure to follow. Ironically, it's fine to claim 100 percent of the men on earth are infected with a mutant strain that always poses a physical threat to those around them, but whenever the subject of Islam's connection to terrorism comes up, there's a rush to make the distinction that only a tiny majority of Muslims are responsible. The Patriarchy twists all men’s minds, while a dogmatic religion of 1.6 billion invented by a warlord does it only in isolated incidents.

The “#NotInMyName” Twitter hashtag used by Muslims to distance themselves from terrorism is fully embraced by the left, while “NotAllMen” is mocked and loathed. Non-violent men are lumped with the violent, especially if it's deemed they don't do enough to stem the violence, but to suggest that regular Muslims don't do enough to check terrorist impulses in their community makes one an Islamophobe. It’s the progressive double standard, once again.

I couldn't have written a better parody of the excesses of intersectional feminism than Fabello and Khan inadvertently did for Everyday Feminism, the publication that also ran an article entitled “3 Ways Men Wanting to ‘Focus On Her Pleasure’ During Sex Can Still Be Sexist.” There's no way to satisfy them, so why even bother trying? Please her 15 ways and there's still three ways you fail the test.

Men not inclined to self-flagellation avoid shrill, self-obsessed publications like Everyday Feminism, and intersectional feminists in general. Women, wanting no part of the bitter divisiveness and paranoid ranting against The Patriarchy—while disinclined to see themselves as constant victims—generally aren't drawn to them either. They remain isolated on the sidelines of society, influential only in scattered women’s studies departments throughout academia. Preachy, overwrought articles like this one (sample sentence: “We’d gladly abandon this work if it wasn’t absolutely necessary to our survival.”) are just another example of the total irrelevancy of intersectional feminism.