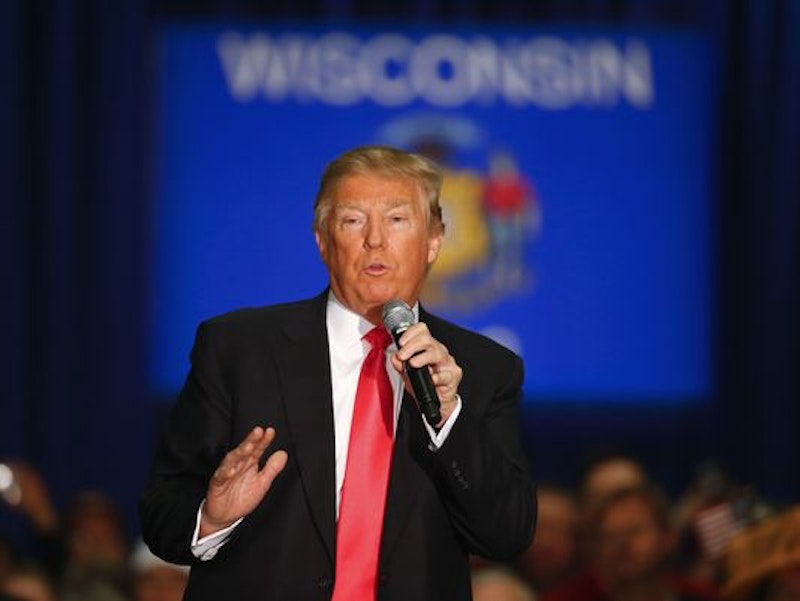 Donald Trump’s behind in Wisconsin, which holds its primary today. He needs the place too; his delegate count gets dicey if he comes out of here with a low haul. But various factors have impeded him in the state, my favorite of these being his mouth. On his first visit, Trump said what he thought of the place. “Wisconsin is in turmoil,” he announced on his jet. He was sitting perkily upright and a small gang of reporters had their microphones stationed in front of him. “It’s always in turmoil,” Trump said.

He meant the months of demonstrations seen when Scott Walker, the state’s governor, broke the public employee unions. “I sit back in other states and I watch it and I see that Wisconsin is constantly fighting and recall elections and… I’ve never seen anything like it, frankly, in the country,” Trump continued. “So you could make a case for it, it’s a good thing because they’re fighters, or you could make a case it’s a bad thing. There’s a lot of hate going on in Wisconsin and I think it’s bad. But worse than that are the numbers, the numbers are terrible.” He meant economic stats. A reporter had doubts about them. “I get these statistics from government agencies. They’re just perfect statistics,” Trump protested.

The reporter wanted to know what Trump made of the tough reception he’d received from the state’s wingnut radio shows, and what he made of Governor Walker’s robust approval rating among party members in the state. Trump appeared not especially interested in either topic. The right-wing radio shows were part of “the establishment,” Trump said, so no surprise they didn’t like him. As for Walker, who had just endorsed Ted Cruz, “I think he’s probably a nice guy,” the billionaire said. Trump went on to imply at some length that the governor looked silly when riding a motorcycle, something the poor man did during his attempt at running for president.

A reporter, picking up on Trump’s claim about the atmosphere in Wisconsin, asked what he would do “to not increase that hate.” Trump said nothing about his expressed views on Mexicans or Muslims, or about the dust-ups seen at his rallies. Instead he reverted to the demonstrations in Wisconsin that accompanied the battle over the public unions. “I’ve looked at those rallies, that tremendous, you know, the interactions between groups of people, and I said, ‘Wow, is this the United States? That was tough,’” Trump said, now Mr. Unity. “And I give Walker credit in one way because he was able to withstand it, and I don’t give him credit because you want to bring people together better than that.” Possibly Trump knows that the Wisconsin primary has a good number of suburban voters, and that they don’t like rough stuff and racial conflict. Or possibly Trump was focused on throwing stones at Scott Walker.

Of course, the fuss about the public unions wasn’t racial. It was a blow against taxes and government, and Republicans in the Milwaukee suburbs are proud of their victory. Politico reports what a caller told one of the local radio shows. “He has no idea what the state went through,” said Todd, who lives in Menomenee Falls. The host, Charlie Sykes, expanded on the view. “You can’t parachute in here from Manhattan and crap on everything we’ve been doing for the last 20 years,” he said.

One reads that Wisconsin is unusual. The Republicans there aren’t mad at their leaders, and the radio hosts are all pulling the same way. Nationally the GOP has no achievements to point at. But in Wisconsin it does. The state as a whole may be unhappy about those achievements—Walker has an approval rating of just 43 percent, according to the same poll that found his rating among party members to be 80 percent—but Republicans in Wisconsin don’t need their struggle denigrated.

Conservatives don’t think Trump is one of them, and he had to prove it by spitting on a sacred memory. In Wisconsin he comes up against a wingnut wall of movement conservatives, college grads who live in suburbia and might wear a Reagan tie pie but not Trump’s silly hat. Trump is also coming off two weeks of foot-in-mouth disease and his campaign manager’s alleged battery of a reporter. And Wisconsin is the first state where most of the early voting came after Marco Rubio left the race: the anybody-but-Trump vote won’t have a dead man getting his cut. The Real Clear Politics average of polls finds an advantage for Cruz of 6.8 points.

None of this looks good for the Big Anus. If it adds up to defeat in Wisconsin, his enemies hope that will be the start of a great wilting in his fortunes, a sign that voters are now looking about them and feeling some buyer’s remorse. Even if that doesn’t happen, a bad night here could stymie the Anus down the road. Trump has stormed into the Republican Party and stomped through primary after primary. But if Wisconsin doesn’t give him a dozen delegates or so (experts’ projections differ), odds drop that he’ll have a majority when the convention meets. Given that most delegates are party regulars chosen by party regulars, and that the Republican Party is basically an invaded territory, Trump needs a majority at the convention’s start if he wants the GOP to roll over and nominate him.

A feeble score in Wisconsin indicates a bloody struggle in Cleveland. Possibly Trump won’t be the nominee after all. The Wehrmacht took a surprising chunk of the Soviet Union, but it didn’t take Stalingrad. Therefore, in the end, it took nothing. The true believers of Wisconsin don’t plan to die in the snow, but they’re staging a last stand. Because of them, the Republican Party may not be absorbed as lebensraum for the billionaire’s ego.