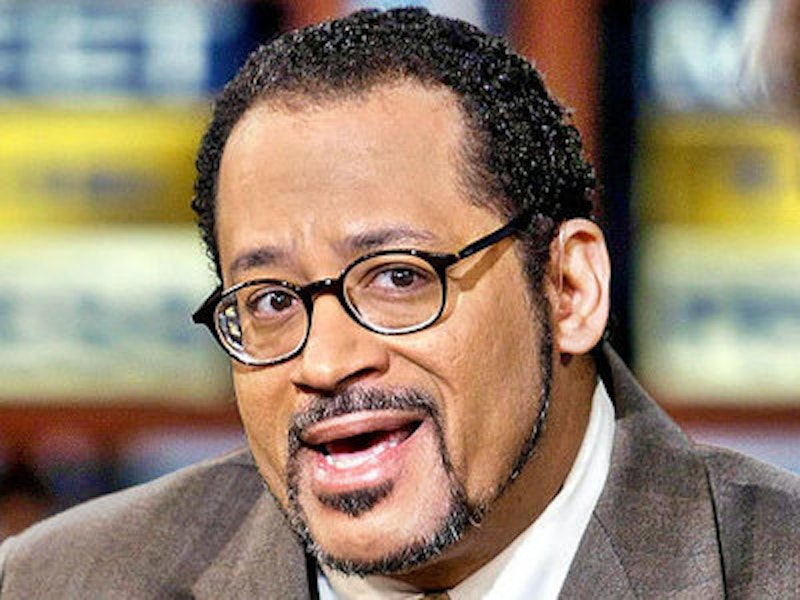 Maybe you've prepared for retirement by opening an IRA but, if you’re white and “woke,” racially-focused Georgetown University professor of sociology Michael Eric Dyson thinks it's your duty to open another sort of IRA as well—an Individual Reparations Account. It’d allow you to address the horrors of slavery and its aftereffects that linger to this day, even though slavery ended way before you were even born. Dyson isn't about to let any white people claim the “woke” prize unless they meet his rigorous standards.

In his upcoming book, Tears We Cannot Stop: A Sermon to White America, Dyson—who became an ordained Baptist minister at age 19—assumes the role of the wise preacher showing the less enlightened, and those tainted by the sins of their ancestors, the road to moral redemption. It’s a toll road, in Dyson's mind. In addition to his IRA idea, he believes that white people should pay the black person who, for example, cuts their grass double what they'd pay a white person. As he told Ana Marie Cox in a recent New York Times interview, “If it doesn't cost you anything, you're not engaging in change,” but he didn't detail how he'd arrived at this particular wage calculation.

In suggesting that white people should treat black people as charity cases, Tyson’s making the assumption that black workers would generally accept this idea as a net positive. I wonder how many of them he's actually asked about this, because it's a flawed concept in a number of ways, including the inevitable backlash and ridicule it would bring. Dyson’s written a book on Malcolm X, but it's hard to imagine the slain leader would endorse such a pride-depleting plan.

Dyson's prescriptions on how to be a better white person are tied to the concept of “white privilege.” Unfortunately for him, it's a trendy idea that few actually buy into in 2017. The ones who want to be seen as “woke” are the target market for the sketchy product Dyson’s selling. They're programmed to accept any opinions on the race issue expressed by an African-American professor because, in their worldview, “listening” to what marginalized minorities say takes precedence over analyzing the content of their ideas. One could see why Dyson, or anyone else for that matter, would cotton to such a mindset. Defending your ideas is often hard and unpleasant work.

And then there are Hillary Clinton’s “deplorables,” those peckerwoods well beyond redemption. These lost souls will never come around on the race issue because they don't care much for black people. Dyson knows this, and doesn't address them, but he's clueless when it comes to reaching that other group of whites who generally support the idea of racial equality but don't care to be considered woke. They don't know what “woke” even means, and their concern over the racial divide does not extend to them opening up their wallets to help address it. They're having a hard enough time paying the bills as it is.

Dyson should take a look at the ugly income disparity gap, cutting across all racial lines, that's been growing in the U.S. since the auto industry began tanking in Detroit in the 1970s. Millions who are getting squeezed by the upward flow of assets and stagnant wages might find a political analyst pressuring them to open reparations accounts elitist and nonsensical.

At the core of Dyson’s problem is that he's giving a “sermon” in his book, but sermons only connect with a narrow group of believers. Dyson's approach is representative of the myopia and lecturing on the political left, the most egregious recent example of which was MTV’s bizarre, embarrassing (“police don't have blue skin”) video, “2017 New Year's Resolutions For White Guys,” a condescending tutorial on how to behave better based on skin color. People don't respond well to hectoring, however, including the black people who justifiably don't like it when white people lecture them on fixing black-on-black crime or the single motherhood problem.

Malcolm X addressed his thoughts primarily to black people, and he's still considered a giant because his approach was direct. Public intellectual Dyson represents the weaker strain of indirect, guilt-driven civil rights discourse currently in favor, but there's a built-in limit to what you can accomplish this way. Few people are as race-obsessed as he is, and most don't care what he thinks they should do as he lectures them from his privileged position at an elite university. A sizable number of these people voted for Obama, but then switched to Trump in November. If the Michael Eric Dysons on the left continue to set the political tone, these people are lost to the Democrats.