Workers of the world, you have nothing to lose but your Streep. 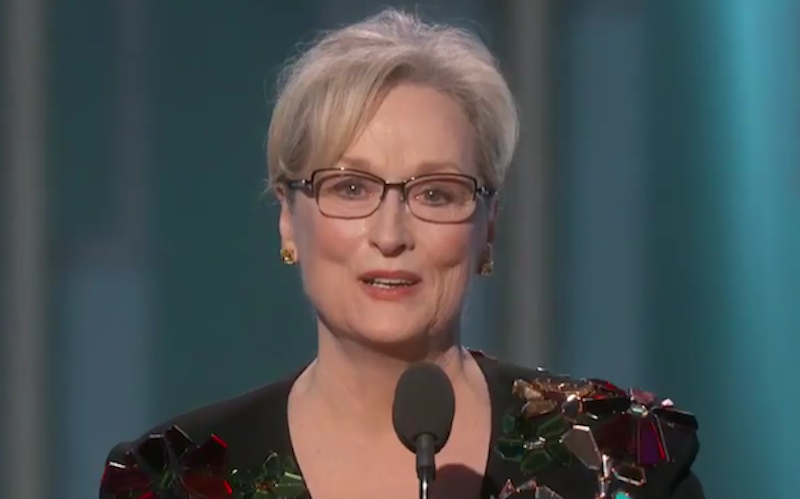 The culture war obsessions of the right and the left can overlap oddly at times. Meryl Streep's Golden Globe anti-Trump speech sparked sneers and derision from conservative pundits like Meghan McCain, who think elite out-of-touch Hollywood liberals help Trump by criticizing him. That conservative consensus was echoed by, of all places, socialist website Jacobin, where Berkeley film studies scholar Eileen Jones attacked Streep's "privilege" and her "intoxicating aura of classiness."

That "aura of classiness" is not exactly class itself. Instead, it's a vague cloud of feelings that stand in for material analysis. Jones acknowledges that Streep grew up "technically" middle-class, but insists "the tilt of her jaw, the lift of her nose" represents aristocracy. Jones says when she was in high school she and her friends were "angry working-class girls," who hated Streep.  Streep didn't resonate with them; Streep irritated them. Streep was the class enemy.

In this context, Jones’ dislike of Streep's speech seems more about knee-jerk, half-thought-through animosity, rather than anything Streep actually said. Jones sneers at Streep for suggesting that Hollywood might be at risk from a President Trump.

There’s some precedent in this country for artistic blacklists, and Trump's ranting reactions to SNL suggests that he'd restrict speech if he could. There's no doubt, though, that stars like Streep aren't the most at risk, and it's reasonable to point out that she's a bit tone-deaf. But then, if only the people most at risk are allowed to point out that Trump's a bully, hardly anyone will be allowed to criticize Trump, which isn’t a good outcome. "Disrespect invites disrespect," Streep said. "Violence incites violence. When the powerful use their position to bully others, we all lose." That's a call for everyone, even those not directly affected, to defend Trump's victims. I think Streep's right that Trump's a bully, and that we all lose when he targets the marginalized. Am I supposed to say it's wrong just because Meryl Streep said it?

For Jones, identity is more important than ideology. Jones sneers at "the American fixation on classiness over class," but her objections to Streep are based in that same, apparently inescapable fixation. This fixation is one that the right cultivates with great assiduity—and for good reason. The Republican Party is, by just about any objective measure, the party of the wealthy. Trump won all income brackets over $50,000 a year; Clinton won people with lower income. That's always the case; the Republicans are the party of big business, tax breaks for the wealthy, and gutting health care for the poor. It's therefore in their interest to pretend that "working class" isn't a measure of wealth, but a kind of consumerist signal. The right wants you to believe that the elite aren't people with more money—rather, the elite are those who live on the coasts, because no one on the coasts is poor. Working-class people aren't those who work for a living; they're people who own guns or really expensive trucks. Actual material differences disappear into a burble of semiotic references, until somehow criticizing a billionaire real estate plutocrat becomes a sign that you're elitist and out of touch.

Socialists, and film studies scholars at Berkeley, should understand the dangers of divorcing class from economic issues. The right, not the left, benefits when class becomes about which actors you like and which region of the country you live in, rather than about the actual depredations of the real capitalists who’ll soon be squatting like bloated spiders in the White House.

Not that Streep’s immune from criticism. I'm not a huge fan myself, and there's any number of reasons to take issue with parts of her speech. But using Hollywood as a stand-in for "class" is just another way of fooling ourselves into thinking that class is about everything except, well, class. And when class becomes a symbol for something else—region, entertainment preferences, consumer items—socialists lose.