Alt-right getting pushed aside now that purpose fulfilled. 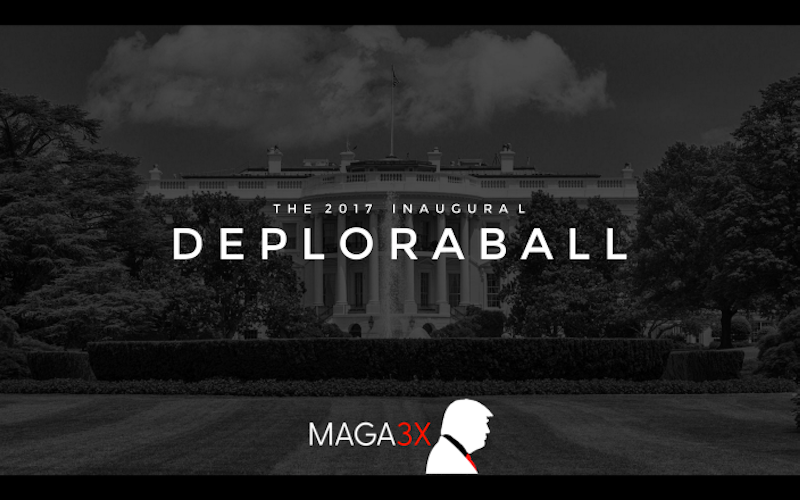 The DeploraBall sold out its first batch of 500 tickets within a day. The second batch was gone in two hours. A thousand of Hillary Clinton's “deplorables” willing to shell out from $99 to $2500 have decided to get the last laugh by gathering at the National Press Club in Washington, D.C. on January 19 to celebrate the inauguration of President-Elect Trump.

The event's website explicitly states that this is not an alt-right affair, referring to the attendees as “Trumpists.” Richard Spencer, the founding father of the alt-right and the person who coined the term is persona non grata at the soirée, much to his chagrin. He's been reduced to sarcastically tweeting that he'll be singing “Kumbaya” at the event and calling them the “alt-light.” Maybe it was the Nazi-esqe November 19 post-election victory gathering in Washington at his National Policy Institute that tipped the scales against him.

Those tasked with building the Trumpist brand certainly want no whiff of the Third Reich lingering in the air as they move forward. Now one of the DeploraBall's main organizers, self-styled alpha male and Twitter troll Mike Cernovich has publicly disinvited Twitter alt-right hero “Baked Alaska” (a/k/a Anthime Gionet, a/k/a Tim Treadstone), provoking a storm of dissent from the hardcore end of the white nationalist movement. The former BuzzFeed on-air talent and erstwhile rapper, who was slated to be a speaker at DeploraBall, had tweeted “it's a common fact the media is run in majority by Jewish people, it's similar to observing blacks are good at basketball.” He also tweeted about white pride and “white genocide.”

When a main promulgator of the Pizzagate hoax and someone who labels his enemies as “pedophiles” is the “adult” in your nascent political movement, you have to wonder about its future, but the culled DeploraBall guest list is serving to expose the rift among American nationalists. Fringe characters like Spencer and Baked Alaska want the movement to explicitly exclude minorities such as blacks and Jews, while the Cernovich faction recognizes the political dangers of assigning a skin color or allowing explicit bigotry into Trumpism.

Some prominent spokespeople for the alt-right, worried about being tainted by the racism of the movement’s ethno-nationalist extremists, are using the term “new right” to describe an inclusive movement that welcomes blacks, Asians, Latinos, gays, and other minorities. They’re looking to freeze out the mainly anonymous types who spend a good deal of time on Twitter glorifying Hitler and obsessing over the racial superiority of white people.

Perhaps the DeploraBall will mark the return of the alt-right to marginalized status after a brief period of elation following Trump's election and his appointment of Steve Bannon as a key strategy advisor. After the video of the NPI Nazi salutes surfaced, Trump disavowed the alt-right. Their favorite word is "cuck," but they’re now calling natural ally Mike Cernovich (180,000 Twitter followers), who also loves calling people that, a "cuck" himself. Something's amiss. It's easy to garner a little notoriety as a bunch of anonymous wiseasses online, but yet another matter to make a move in the direction of the mainstream once your man gets elected President. Even Bannon has slapped their wrists, stating that there's no place for anti-Semitism or racism within the alt-right. Just because you were useful in getting a candidate elected doesn’t guarantee you won't be discarded after the victory if risks outweigh benefits.

Milo Yiannopoulos was brought in to DeploraBall soon after Baked Alaska got dumped. He, like Cernovich, has denied being a member of the alt-right. The Breitbart provocateur is too savvy and career-oriented to go much beyond the flirtation stage with them. DeploraBall may in time come to be seen as the American nationalists’ Night of the Long Knives, which marked Hitler’s purging of the Nazi Party’s undesirables. Richard Spencer and those of his ilk can't accurately be called conservatives, as they don't even believe in the U.S. Constitution. Their allegiances lie elsewhere. Now they're bitter and talking of “revolt,” but there's not much they can do at this point. Trump is still the best president they can hope for. Cernovich, Yiannopoulos, and Infowar’s Paul Joseph Watson are poised to become some of the more visible faces of the American nationalist movement. They have a better understanding of where the boundaries are. The liberal media thinks the term “alt-right” is too sanitized and is looking for a replacement. On the right, the pragmatic Trumpists are more concerned with keeping them at arm’s length. Their dream is only possible through an ethnic cleansing of the United States, but now they can't find any allies.