A states' rights approach is no approach at all. 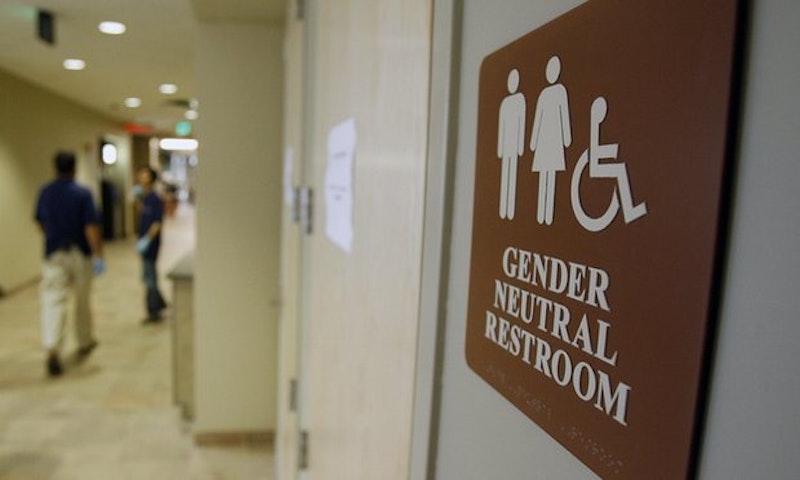 When Donald Trump was sworn in as president, the entire LGBTQ community gulped in fear. Even though he said he would be a better friend to “the gays” during his campaign, he also voiced his support for North Carolina’s infamous bathroom bill, told Fox News Sunday he would “strongly consider” appointing justices that would overturn the Supreme Court’s same-sex decision, and continually voiced his support of the First Amendment Defense Act that might allow business owners to discriminate against LGBTQ people. There was a brief sigh of relief when the White House announced Trump won’t touch Obama’s 2014 anti-discrimination protections, but then a few days ago The New York Times reported that Trump won’t challenge the injunction that prevents trans students from using the bathrooms that match their gender identities.

Here’s some background information. In May of last year, Obama issued a directive for public schools to allow transgender students to use the bathrooms and locker rooms that align with their genders, citing Title IX, which forbids gender-based discrimination. A few months later, though, federal judge Reed O’Connor of Texas issues an injunction to block Obama’s directive. According to Liam Stack of The New York Times, conservatives oppose Obama’s directive because “allowing transgender students to use those facilities poses a threat to the privacy and safety of other students.”

But is that really the case? Studies show the exact opposite: trans people are more likely to be assaulted in gender-segregated bathrooms than cisgender people. So why all the fuss about who gets to go into what bathroom? It boils down to two words: ignorance and bigotry.

Many believe that transgender people are just “confused,” but science says differently. The most current edition of the Diagnostic and Statistical Manual of Mental Disorders (DSM-V) recognizes gender dysphoria as real condition:

For a person to be diagnosed with gender dysphoria, there must be a marked difference between the individual’s expressed/experienced gender and the gender others would assign him or her, and it must continue for at least six months. In children, the desire to be of the other gender must be present and verbalized. This condition causes clinically significant distress or impairment in social, occupational, or other important areas of functioning.

Also, scientific studies show a neurological basis for gender identity. For example, in 2015 the Medical University of Vienna released a study that shows, after using MRT brain scans on both cis and trans men and women, “significant differences in the microstructure of the brain connections between male and female control subjects. Transgender persons took up a middle position between both genders.” The study goes on to explain that trans women’s brain patterns are more similar to cis women’s than cis men’s, so trans women aren’t just “men pretending to be women,” they are women.

Right-wingers love a boogeyman, so they ignore all this and tell people trans people are coming after their children, just like Michelle Duggar did a few years ago before we all found out her son was a child molester. It’s this kind of mentality that led to North Carolina’s HB-2 and other bathroom bills across the nation. These bathroom bills led to the #WeJustNeedToPee movement where trans people took selfies in public bathrooms that corresponded to their assigned genders at birth to show how out of place they were.

However, one trans boy is fighting back. In 2015, Virginia high school student Gavin Grimm sued his high school for not letting him use the boy’s room. This year the case will go before the Supreme Court in March, and trans actress Laverne Cox gave Grimm a shout-out during this year’s Grammys. Unfortunately, according to The Washington Post, if Trump rescinds Obama’s directive, “some question whether the high court will hear the case at all, or if it will be remanded to a lower court.”

Whatever may come of Grimm’s case, one thing’s for certain: so far Trump’s not the friend to the LGBTQ community—especially trans people—he promised to be. He may find nothing wrong with being trans, but his insistence that states decide what to do with their bathroom laws shows he doesn’t care about trans people’s safety and security.