And it’s still fueling his campaign. 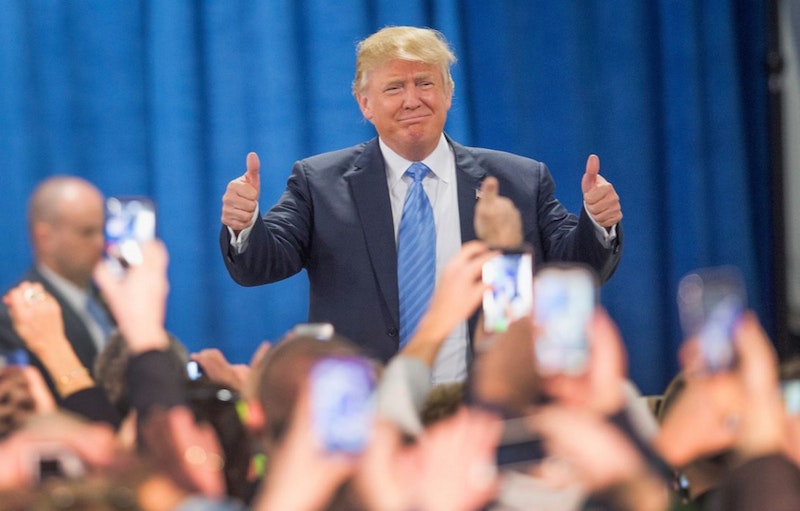 At this point—six months into Donald Trump’s no-rules, really weird campaign for president—why is the media, mostly expressing contempt for the candidate, still recording every syllable the man spews at real or mythical jam-packed rallies? It’s clearly having little effect on his popularity among a large number of Americans, and likely stoking even more support for the xenophobic, misogynistic, bigoted reputed billionaire who wants to occupy the White House. Maybe he will peter out: I’ve no idea, despite the filth that comes out of his mouth every single day. Common sense, and traditional politics, is not on offer this time around, and all the fancy, affluent op-ed columnists who protest otherwise aren’t paying attention.

This week, Trump’s preposterous proposal of banning most Muslims from entering the United States is seen by the intelligentsia as the “tipping point,” and he’ll soon be polling about as well as Jeb Bush. As noted in this space, after Trump’s attacks on captured vets last summer, I figured that was it. And then essentially calling competitor Carly Fiorina an ugly, old bag. But no dice. One fellow on Twitter said that it would take Trump appearing at a rally in blackface to derail his momentum. Don’t think so: he’d spin it somehow, and the cable news shows would accommodate him, giving him a megaphone, even while they blast him. Let’s not kid ourselves: TV’s making a lot of money off the Trump phenomenon and isn’t about to stop. What could kill his candidacy before real voting begins in Iowa and New Hampshire in February? It’s a head-scratcher, although allegations (or clear evidence) of pedophilia could stymie the man who has an answer for everything.

It’s said repeatedly that Trump, the most narcissistic presidential contender perhaps in American history—in a profession where narcissism is a necessity—is addicted to attention. No kidding. He’s demonstrated that since the 1980s, and along the way learned how to play the media. But more importantly, the media is addicted to Trump.

The New York Times published a pair of op-ed columns this week addressing Trump’s lunacy, and both, unsurprisingly, were badly off the mark. Thomas Friedman, who fancies himself as an ambassador to the world, took time out from solving the ISIS crisis, to “assure” an Egyptian education official at a seminar in Kuwait that “Trump will not be our next president—that America’s commitment to pluralism runs deep.” He concluded: “Trump, well, he may be a deal maker, but he’s no poker player ready for the Middle East five-card stud sharks.” I agree with Friedman’s assessment of Trump’s red-flag deficiencies in foreign policy, but how can the columnist make assurances to his Egyptian friend that Trump won’t win the GOP nomination and presidency? It’s a risky promise.

More prosaically, Friedman’s colleague Frank Bruni has a message to his colleagues in the media, even as he writes another column about Trump. Bruni, who also believes Trump’s about to fold, writes: “It’s cold turkey, Trump. We don’t need the ratings, not when they come with the ravings. [Easy for a newspaper columnist to say, instead of a Fox, CNN or MSNBC accountant.] We should be—we must be—better than that. And [Trump] will fade, probably starting now, because while there are scared Americans and petty Americans and moments when we all lose our way, we’re not lost enough to keep indulging him. We’re nowhere near that far from greatness.”

Harrumph! That settles the Trump tantrum! Bruni never admits that the media is about as popular as Congress—depending on the poll du jour—and that his frothing about Trump means zilch to the candidate’s supporters who’ve been cowed by his extended Howard Beale routine. Might Trump get swamped by, say, Ted Cruz (another anti-immigrant demagogue) in Iowa? Sure. But how can anyone in the media, or Beltway group of insiders, or GOP establishment, say that for sure? It is certain that millions of people—independents, rational Republicans—will vote for Hillary Clinton over Trump if that’s the match-up. But the real question is how many casual voters, or non-voters will pull the lever for the man. And further muddying the election, I suspect, is that there are millions of others, including some Democrats, who’ll vote for Trump in private but never admit it to friends or even family members. I doubt either Friedman or Bruni has the imagination to consider that scenario.