The Future of Trump 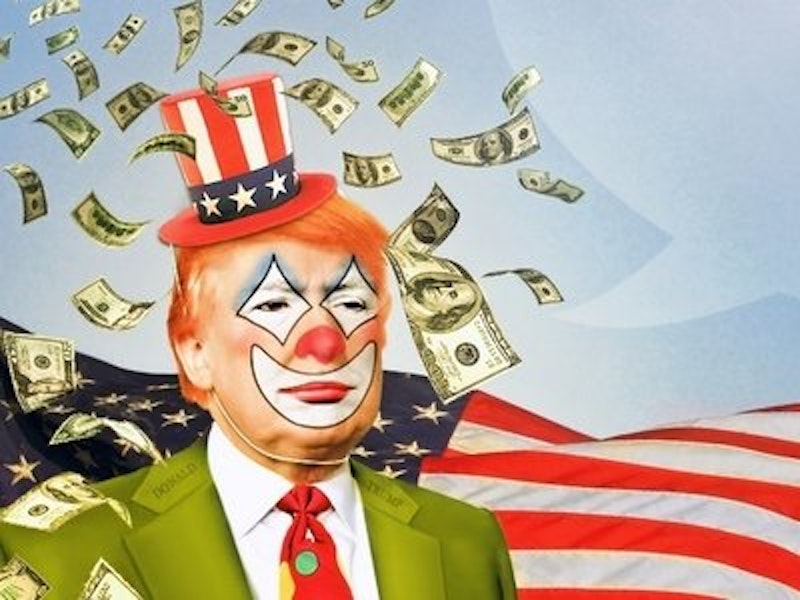 Fascism is scary. So it's no surprise that many pundits have reacted to Donald Trump's plan to ban Muslims from the U.S. with fear and horror. Activist and writer Shaun King summed up the thoughts of many when he argued that Trump's ascent foreshadowed an American apartheid. "This, ladies and gentlemen, is how ethnic cleansing and apartheid begin," King said, pointing to the success of Trump's campaign. "The key ingredients needed to make a full-blown man made humanitarian crisis a reality are now more present and more mainstream than ever.

So is Trump going to install himself as dictator of America? Or, if not that, will his candidacy push America rightward into fear, hate, and violence? It's hard to predict the future… but I think the answer to both of those questions is, "probably not."

Trump does have high poll numbers, but there's no real reason to think they translate into widespread support. As Nate Silver points out at 538, most people are barely paying attention to the nomination contest. Trump's polling is high because he's good at dominating the news, and most people answer polls based on name recognition. As the election gets closer, other candidates will get more attention, and Trump's numbers will slip. This has already started to happen in Iowa… which, Jonathan Bernstein suggests, is why Trump has taken to making more and more outlandish claims in a desperate effort to stay relevant.

Even if Trump doesn't win, though, won't his overt expressions of fascism move America rightward? Jeet Heer on Twitter suggested a scenario in which Trump's success paves the way for a smoother demagogue to win the GOP nomination in the future. If Trump wins many states, or has a very strong showing, it's certainly possible that another hateful nativist might be tempted to run for president. However, it's worth remembering that similar candidates have run for in the past too. Pat Buchanan was runner up for the GOP nomination in 1992 and 1996. For that matter, Ted Cruz is out there campaigning right now. The GOP is mired in white identity politics and racist bilge; Trump hasn't changed that. This is a terrible moment for anti-Muslim sentiment—but that's because of the terror attacks in France, and (more broadly) because of the shift towards Islamophobia since 9/11. Trump is riding that wave, but he didn't cause it.

You could see scenarios, in fact, in which Trump helps the GOP move away from its worst impulses. If he loses in both Iowa and New Hampshire, future candidates could take it as a warning that fascism is not a successful GOP primary strategy. His ugly campaign could also lead the GOP to try to reassess its current embrace of FOX and conspiracy theories. And if Trump decides to go third party, and costs the GOP the election, that would put a damper on Republican immigration plans for at least four years.

If that sounds overly optimistic—well, yes, it's probably overly optimistic. Similarly, worries about Trump ushering in a fascist state are probably overly pessimistic. The most likely result of Trump's run this year is a big nothing. If Trump loses the nomination (which is very likely in my view) and if he doesn't run third party, he’ll be largely irrelevant, if not forgotten, by this time next year. I doubt he'll even stick with fascism as a public persona; being a celebrity seems like it would be a lot more congenial than trying to be the next David Duke. Though perhaps he'll opt for a right-wing talk radio spot, since he's ruined his chances for a mainstream Celebrity Apprentice type gig.

American support for racism and fascism predated Trump, and it will survive him. Maybe Trump will inaugurate a new, more virulent phase of hatred and violence. But it's worth remembering that we're still a democracy, and that, so far in that democracy, Trump has won exactly nothing. Trump certainly trumpets his own importance, but the rest of us don't have to believe him.