Michael Brooks’ Against the Web is a thin denunciation of the already irrelevant “Intellectual Dark Web.” 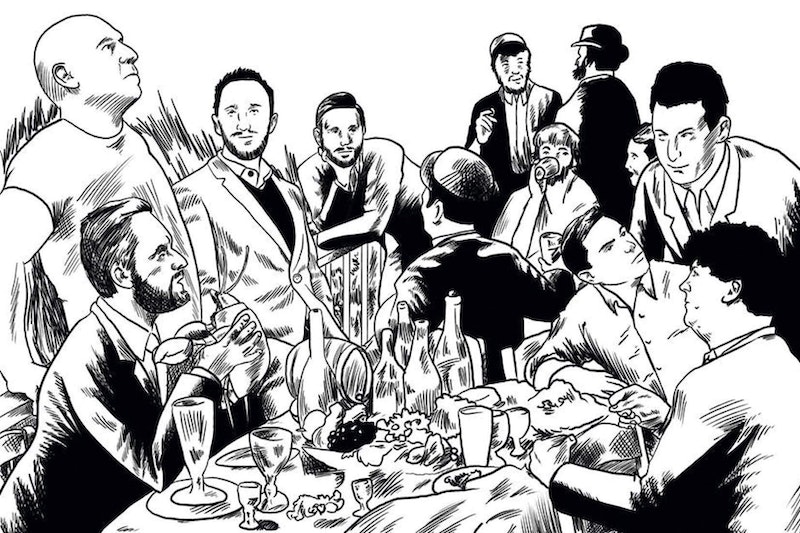 I doubt many people remember the “Intellectual Dark Web” or the New York Times piece by Bari Weiss that tried to introduce them to civilized society. The oft-abbreviated "IDW" comprises an impressive roster of right-wing idiots including Sam Harris, Jordan Peterson, Ben Shapiro, Bret Weinstein, Eric Weinstein, and Dave Rubin.

Like Michael Brooks, I refuse to include Joe Rogan in this group—Brooks' new book Against the Web: A Cosmopolitan Answer to the New Right is the first leftist critique of the new right that recognizes Rogan’s show for what it is: one of the most popular podcasts in the world, "heterodox" in its content. Rogan is this era’s Howard Stern, and anyone who refuses to go on his show or criticizes others for doing so betrays their own ignorance and moronic media strategy. You want to reach as many people as possible, and Joe Rogan's listeners are relatively open-minded. Anyone who wants to be heard should go on his show if given the chance.

Still, I remember seeing this picture of the IDW having a nice dinner in the summer of 2018—jet-lagged in Santa Barbara for a wedding and only really concerned about getting caught smoking on my hotel balcony... I just remember thinking Rogan didn't belong with these charlatans.

Against the Web is a slim 82-page dismissal of the IDW’s three most popular members: Harris, Peterson, and Shapiro. Dave Rubin is taken care of in the beginning and toward the end, but if you’ve ever seen The Michael Brooks Show or The Majority Report you’re familiar with the material. The Weinsteins are similarly dismissed as “dull,” and I agree—the racism, xenophobia, and borderline sociopathy of Harris and Shapiro are properly filleted and mocked for what they are: insane. Citing passages from Harris’ The End of Faith and from Shapiro’s The Right Side of History, Brooks eliminates any doubt that these men are anything other than murderous Zionists with a soft spot for eugenics and race science.

Peterson is a more peculiar case. Brooks’ diagnosis of Peterson is also correct, and this is what I appreciate most about him and his show: the clunky “cosmopolitan” in the title refers to a sensibility I share and agree the left would benefit immensely from. Circular firing squads and cancellation parties must be, uh, cancelled at once if we’re ever to emerge from the “Vampire Castle” the late Mark Fisher wrote about in 2013. “It is driven by a priest’s desire to excommunicate and condemn, an academic-pedant’s desire to be the first to be seen to spot a mistake, and a hipster’s desire to be one of the in-crowd.”

(Jamie Peck, Brooks’ Majority Report co-host and host of The Antifada, recently called Fisher’s essay “the worst thing he ever wrote,” without elaborating in an aside.)

Energy cannot be wasted on litigating peers when intention is clear. No movement can survive without a sense of humor. I actually think Chris Matthews was right to a certain extent about leftists and "non-negotiable demands." Of course he was talking about long dead conscientious objectors handing out pamphlets in New England, but that defeatism remains in the refusal by some Sanders' supporters to acknowledge where his campaign went wrong.

The GOP couldn't stop Trump in 2016, and even though the DNC took cues from that primary, Sanders could've beat Biden, and it would've been easy. At that last debate, he should've asked the former Vice President to recite the alphabet. No audience to boo him, what's the risk? Ask him a series of trivial questions until he gets sleepy. 100% fatality. Sanders is a decent human being so he did not do this to Joe Biden (his "friend"), but I don't care. He failed all of his supporters.

Unfortunately, like all Zero Books, Against the Web is riddled with embarrassing typos: “APAC” twice instead of “AIPAC,” dropped letters, and repetition of words. There’s a line late in the book with no spaces between words—I understand the immediacy and inherent drawbacks of Zero’s approach, but this is unacceptable. If this were my book, I’d pulp the copies. It’s also too slim to justify any mistakes or sloppy editing. This book could be 20 pages shorter with a decent editor. Brooks is a great commentator, broadcaster, and mimic—but not a great writer.

Like Howard Stern, his tone doesn’t translate to the page, and when he tries, it reads like cash grab cotton candy. Knowing the show and knowing his voice, this sentence is funny: “(In fairness, [Dave Rubin’s] show has a larger audience than mine, while my show is the infinitely superior program.)” I also hear Brooks’ excellent Trump impression at the end there, a version of Trump I’ve always appreciated: the consoler. When he gets quiet, whispery, and slightly sleepy.

But I’m reminded again of Private Parts, a wholly unnecessary book and a decent movie spawned from a brilliant radio show. This is thin gruel. It’s also bloated with quotes and passages from the very authors he mocks, which even as secondhand reading is, as he puts it, “torturous.” Sam Harris much duller than Jordan Peterson, “as intense emotionally as a tent revival preacher,” a man who talks like a Muppet and made millions of dollars off exhorting young, confused young men to clean their rooms.

Against the Web covers a time-sensitive topic, as Brooks acknowledges in the introduction. The IDW’s “moment,” however small, has already passed. They’re largely recognized as a joke in the mainstream media. But if Jordan Peterson ever makes it out of Moscow free of his Klonopin addiction, rest assured he’ll return to North America to sold-out theater tours and millions of dollars in book sales. No events or large gatherings anytime soon? Well, Klonopin takes a very long time to kick. Maybe Michael Brooks can churn out another more presentable book in the meantime.