New York, like Biden, is either fine or collapsing. 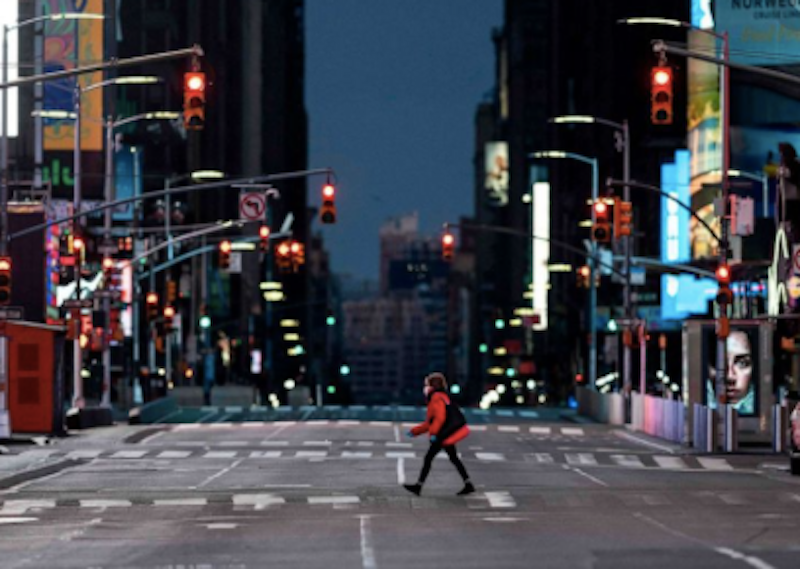 We don’t know if/when the world will become a “post-corona crisis” world, and we don’t really know if, even when that times comes, there’ll be an agreed-upon estimate of how bad it all was or how much of the decision-making made sense. In the future, just like today, we may have to make do with a mountain of contradictory anecdotes, like those we’ve heard here in New York during the past month or so of lockdown.

NBC News, attentive to what really matters to New Yorkers, notes the closing of the Brooklyn lesbian bar Ginger’s, estimating there are only 16 remaining lesbian-themed bars in the U.S. and asking whether they will survive the pandemic—though that likely suggests lesbians are welcome at the regular bars nowadays. For its part, ABC 7 noted CV victims appear to be 60 percent male but immediately added its worry that trans men with CV are not being specifically tracked and statistically analyzed.

The hooting and hollering masses here ostensibly show their support for healthcare workers every night at 7 p.m.—but the occasional dissident voice like this friend-of-a-nurse says moronic hospital procedures are killing countless patients who might have lived.

Given how few otherwise-healthy people die from CV (the average age was 80 among that big initial wave of Italian fatalities, tragic though any death is), the main purpose of the lockdowns was purportedly to avoid a giant simultaneous rush on hospital resources in places like dense, urban New York. Yet massive layoffs and furloughs at hospitals and among other healthcare workers as a consequence of CV are also reported by mainstream outlets as if they too make perfect sense.

The New York Times is hardly a far-right, risk-loving publication for hardy outdoorsmen, yet it acknowledges that 88 percent of those hospitalized for CV have had two or more serious underlying conditions. We all know people who know people who are heartbreaking examples of victims cut down in their prime by this—but if it’s rational to acknowledge that danger, it’s also rational to admit this is mainly killing people who could as easily have been killed by a strong breeze.

We can’t continue to let this destroy the rest of civilization. End this madness. Let the economic illiterates—who always favor crushing business with or without a “curve” to crush in the process—rage. The rest of us, as always, will have to carry on and maybe even carry the ragers along with us while they shake their useless, authoritarian fists.

The alternative will not be a consistent or effective quarantine anyway. Even in relatively easily policed, urban, grid-like Manhattan, tales now abound of people pummeled by cops on one street while thick crowds party unimpeded a few blocks away. Authoritarianism is not methodical but sloppy, always.

Witness Mayor de Blasio’s hilariously tone-deaf tweet warning, “My message to the Jewish community, and all communities, is this simple: The time for warnings has passed. I have instructed the NYPD to proceed immediately to summon or even arrest those who gather in large groups. This is about stopping the disease and saving lives. Period.” Yet this city is filled with people who claim to hear echoes of Hitler every time Trump complains that CNN makes him look bad.

Next month’s Democratic presidential primary in New York State has been canceled, seemingly a sensible, non-chaos-inducing move since Biden is now seen as a foregone conclusion. Yet this change could technically rob Biden of the votes needed to secure the nomination pre-convention, yielding… great entertainment. I suspect he’ll be anointed regardless, with the party elders’ tacit understanding that his (or their) v.p. pick will soon take over from him if he makes it to the White House anyway—with that v.p. to be determined without an iota of voter input, smoothing our way back to aristocracy after a 232-year hiatus.

Certainly, those recent sex allegations won’t rob him of victory. You might’ve thought the Democrats were so “Me Too” nowadays that this would hurt him, but, for example, a staffer at the Atlantic, that official magazine of the most staid parts of the establishment, has hastened to argue that Biden’s purported assault of Tara Reade is not part of any known “pattern” of bad behavior by Biden—since the numerous other women who say Biden touched them inappropriately said they didn’t think he was being intentionally inappropriate, whereas Reade did. Thus she’s not part of a pattern. QED! Problem solved! Nothing more to be seen here!

Liberalism, like medieval Catholic theology, is mostly just rationalizations for maintaining power now. The more column inches or lecture hours you let its adherents use, the more evil they will rationalize.

If Biden falters, though, it looks as if two New York State residents might be waiting in the wings to take his place: Hillary Clinton or (thanks to CV) suddenly-beloved Gov. Cuomo, who according to CBS News was asked by a reporter what he’d say to New Yorkers who want to go back to work because they’re running out of money. Cuomo replied, “Economic hardship doesn’t equal death… You want to go to work? Go take a job as an essential worker.”

I guess Americans really do like New York-level rudeness and “toughness” in a “leader,” no matter what party he comes from. And overhead, the military’s Blue Angels jets circle Manhattan in honor of those facing CV. Expensive military hardware is reassuring, apparently, even to this city of liberals who have special reason to fear plane crashes.

Meanwhile, the Governor and Mayor, though they have their differences, have joined forces to encourage the shipping of CV patients to nursing homes, putting the most dangerous people currently alive in the midst of the most vulnerable, likely the worst possible strategy right now. Cuomo even added that the homes have no right to reject the diseased newcomers. That’s leadership!

It was also leadership when Cuomo had the courage to lock horns with Trump over New York’s purportedly urgent need for ventilators (which may kill patients anyway), then turned around and admitted thousands of ventilators are now idle in storage here “where they’re supposed to be” because “we don’t need them yet.” Fight first, use the resources at hand later. Bare-knuckle goddamn leadership!