I’m not surprised to hear from friends that the Russian Orthodox Church is a shell of its pre-Revolutionary self. 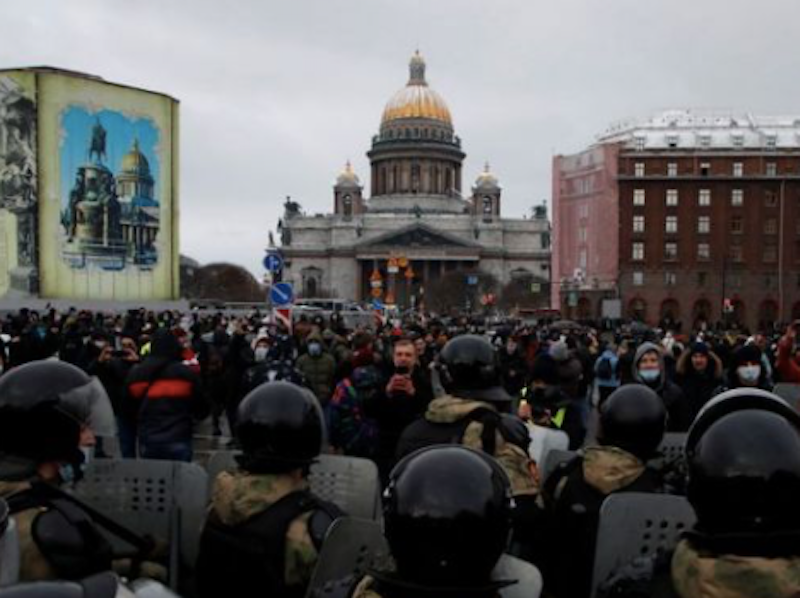 What a tragedy the Navalny situation is. Not for that particular traitor, who made his own stinking bed, and now is obliged to lie in it, but for Russia, Our Holy Mother, herself.

The presence of hordes of violent Navalny partisans in the streets of Russia suggests that that country isn’t quite the exception that some of us have liked to think it is. In the Sacred Lands of Rus’, too, a dissolvent liberalism exerts its force, like seepage that degrades the integrity of a fortress’s foundations. True, the situation is only a fraction as bad as it is in a fast-unravelling West. But I don’t find it much of a consolation to think that Russia is even as much as 50, or 70, or 100 years behind us Americans, here in our tech-surveilled dystopia. A couple of decades one way or another wouldn’t seem to make much difference when the lurid writing is on the wall.

Indeed, Russian friends report to me that a younger generation—the “Navalny generation”—is as unmoored from, and as contemptuous of, its own traditions and the sources of its culture’s strengths as the younger Western generations are from and of their own. They’re just as addicted to the poisons of globalist modernity. I’m not surprised to hear from these friends that the Russian Orthodox Church is a shell of its pre-Revolutionary self, but it does startle me to hear that the Christian faith of today’s Russians is wide but shallow. Even the most pious Russians, I’m told, are really by now merely “cultural” Orthodox Christians, Easter-and-Christmas churchgoers who represent the Slavic equivalent of those American Reform Jews for whom the Tradition of David reduces to little more than convivial Passover Seders, schmaltz smeared over a morsel of tender bialy, and a cultish devotion to a puerile cultural leftism.

“Don’t be fooled, my sweet John, my good Ivanchik,” said my bearish Russian priest one Sunday after mass as he swilled beer, smoked Kools, and watched the NFL in that outbuilding shack of his, located in the field behind our little church, that we’ve dignified by referring to it as the “parish house.” “All is not well in my native country. Some of the most church-going young Russian men I know nonetheless jack off with the aggressive frequency of sailors.

“As for the girls—are you logged into Instagram, Ivanchik?” He snickered and wiped the foam off his beard. “I could show you some pictures of artistic gymnasts from Ekaterinburg.” He wheezed with laughter again, all the while working with his hand the rosary that, most piously, he keeps deep in the pocket of his robes. “Oh, they are young, Ivanchik, they are young. But young means flexible.”

On the other hand, nothing is inevitable, and some of my Russian acquaintances take a more optimistic view: that if anyone’s up to the task of dissipating the post-Christian malaise and steering Mother Russia back to its own best traditions, it’s Putin, with the help of his admirable state and extra-governmental apparatuses. Along those lines, my fellow Russophiles and I are already taking heart from the rumor, which is spreading giddily among us traditionalist conservatives, that Russia’s pro-Putin biker gang The Night Wolves is “out for” Yuliya Navalnaya, the traitor’s wife.

“Like the great Ice Cube rapped, ‘A suka is asuka,’” Father Nicodemus chortled. “The Night Wolves are fine lads. They’re going to give that Yulka a real talking to—if you know what I mean. On the other hand, I hear that she might seek asylum in the U.S. Embassy in Moscow. That would be fitting. Someday, John, my sweet Ivanchik, my little swallow, I will tell you the famous joke about the sow who crawled into the she-wolf's hole when the government inspector wandered by, in his cups, undoing the buttons on his kal’sony—his smeared and stinking long johns.”

At which point his laughter devolved into a coughing fit, from which he emerged only after turning an alarming beet-red shade, hammering his own chest with his fist, and hocking up into his ashtray.

To keep readers up to date on my other incursions into Russian culture, I’ve just started reading volume 1 of Stephen Walsh’s two-volume biography of Stravinsky, having read volume 2 first, last year. My admiration for this composer has always been leavened by my disappointment that he emigrated from Russia—making him, if not a traitor like Navalny, at least an ingrate, too indifferent to the debt he owes the stern and holy culture that formed him. But maybe reading this book will change my view.