The Wall Street Journal's signature "a-hed" front-story is thriving, despite predictions that Rupert Murdoch would ditch it. 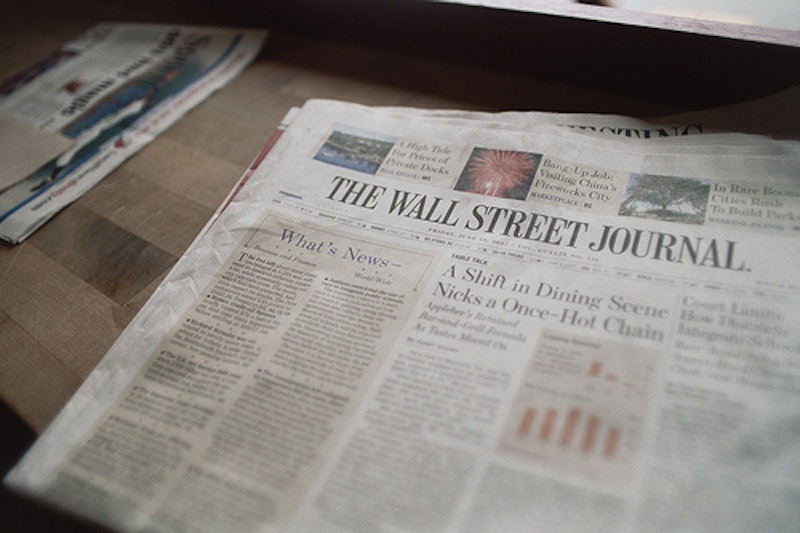 Two years ago, in a long feature story for The Atlantic about Rupert Murdoch and his takeover of The Wall Street Journal, Mark Bowden worried that the paper’s “quirky” front-page “a-hed” story might be a casualty of the new regime. He wrote: “Under [Robert] Thomson, though, the leder is shrinking and clearly endangered. The a-hed seems to sink lower and lower on the front page every day, like a setting sun.”

Today, likely to the chagrin of Murdoch-bashers in the media—not necessarily Bowden, for his Atlantic story was far more gracious and even-handed than those of others who’ve made it a habit to use the Australian tycoon as a go-to punching bag—the sun hasn’t set, at least for the a-hed. In fact, aside from the occasional jarring photo on the front page of this or that celebrity embroiled in scandal, the paper pretty much resembles the Journal when it was owned by the dysfunctional Bancroft family. On July 7, for example, there was a marvelous a-hed about two Major League Baseball players who still live at home, despite earning the MLB minimum salary of $400,000.

The reporter, Stu Woo, focused mostly on Tyson Ross, a 23-year-old reliever for the Oakland A’s, describing his odd—at least to me—lifestyle that includes sleeping in the same bedroom as he did growing up in Oakland. Players are on the road for half the season, of course, so Ross has to rough it in various hotels when his teams isn’t playing at home. The pitcher, says Woo, is subject to occasional ribbing from his teammates, but apparently it’s worth it: “[He] gets to eat home-cooked meals, sleep in his own bed and hang out with high-school buddies. He also saves on rent, meaning he can devote more of his [salary] to video games. ‘This cuts out all the hard stuff, like setting up cable and getting furniture,’ he says.”

Yikes. Even considering the ancient maxim of “Do Not Judge, Lest Ye Be Judged,” Ross’ arrangement strikes me as rather peculiar. Here’s a gifted athlete who’s risen to the top of his profession—whether he stays in the Major Leagues or not is anybody’s guess—drawing a fat paycheck for someone his (or anybody’s) age and he’s tickled to have his mother do his laundry. Stranger still, as Woo goes on, Ross’ girlfriend is part of the mix: she often “sleeps” over at her beau’s home and allows that it’s “weird” when Tyson’s father bids her good night when the couple retires to the pitcher’s bedroom.

Ross’ mother is delighted that her adult son prefers her abode to an apartment or condo, pointing out that Tyson spends time with his 17-year-old brother and the family goes out to the movies together. One drawback: “I still have to clean his bathroom for him.”

Okay, aside from the obvious sit-com possibilities that could be drawn from the Ross household, isn’t this a case of (pun intended) arrested development? It’s one thing when a young adult is down on his or her luck, can’t find a job and saves money by (usually) suffering the indignity of going back to mom and dad, but Tyson Ross is, as was once said, livin’ large. The sin is mine, of course, for casting the first stone, and for that I may have added to a list of offenses that will haunt my soul in purgatory, but this vignette is beyond comprehension.

The moral of Stu Woo’s story? I’ll take the high road and simply point out that the Journal’s a-hed is still with us, and Mark Bowden can relax.