May Graffiti Flourish: It's Not a Symbol of Urban Decay

The motives of gallery owners, art agents, and some graffiti artists aren’t always pure, but contrary to highbrows, this form of expression brightens up a neighborhood. 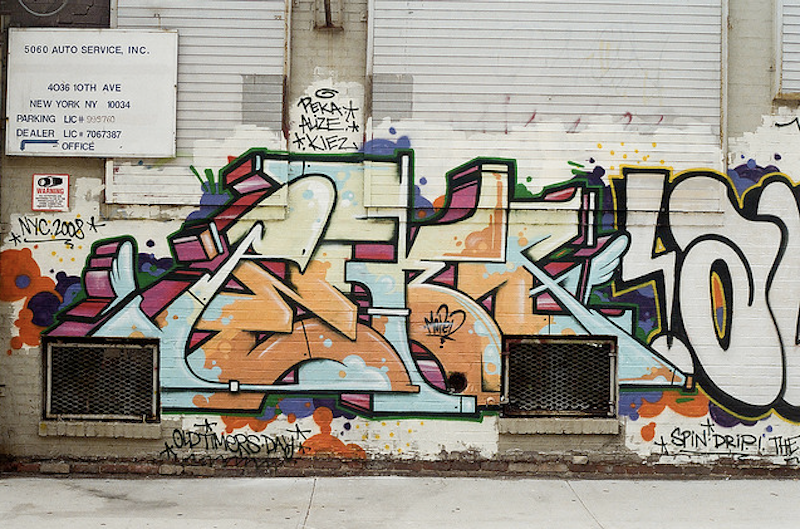 Last week, after reading a tag-team destruction of graffiti and its supposedly miscreant practitioners in The New Criterion and City Journal (the former commenting on Heather Mac Donald’s long essay in the latter), I was reminded of a bizarre incident nearly 22 years ago that took place late at night in a Lower Manhattan bar. More on the snooty, and quaint too-bad-it’s-not-the-1950s-anymore attacks on graffiti below, but first a brief recollection of that 1989 evening in which one of my best buddies and I locked horns over the validity of Robert Mapplethorpe’s homoerotic art being shown in prestigious museums and galleries.

Jack and I had known each other for years, meeting in Baltimore, and spent days competing on the croquet field, nights at various restaurants and pubs, ballgames at the old Memorial Stadium or taking in a film. Several years older than me—in fact, a classmate of one of my brothers at Johns Hopkins in the 60s—Jack was the only person I knew who actually sat through the entire nine-hour documentary Shoah. An extraordinarily well-read man, who could go on for hours, effortlessly, about 18th century British naval battles, the Russian Revolution, or the first time he saw Cream live, Jack was, like me, an economic conservative who, I thought, was also fairly tolerant about social issues. So it was out of left field when he started bashing Mapplethorpe’s photography and agreeing with the dimwits who insisted his work ought not to be shown in public. I thought he was pulling my leg, just a bit of provocation to help the digestion of the sirloins we’d polished off two hours earlier at Spark’s Steak House, so at first I joked around, saying that maybe he was scared of gay guys.

That wasn’t the wise course, as it turned out. We had no beef about the issue of whether art should be federally subsidized, agreeing that it’s a bad idea, but when he launched into a tirade about the “filth” of Mapplethorpe sullying the surrounding artwork I knew this was heating up. Stupidly, but not angrily, I argued that if people didn’t want to see the late artist’s pictures of naked black men, bullwhips inserted in anuses and the like, well, no one was forcing them to. Freedom of expression and all that: so what was all his folderol about? The conversation got very touchy, and as we drank pints of Harp, I could see that it wasn’t going to end well. It didn’t: after jabbing a finger in the air to make a final point, Jack hastily took his leave and we haven’t spoken to this day. Live long enough, as they say, and you encounter unimagined experiences, and this termination of a close friendship certainly qualified as one of the strangest events of my lifetime.

We had, of course, mutual friends, and no one—without dipping their toes into the murky waters of who was right or wrong—could figure it out. I made a few overtures to Jack, a letter or two (this was pre-email), but when he didn’t even acknowledge an invitation to my wedding not long after the night in question, I gave up and told anyone who wanted to play Henry Kissinger that it wasn’t worth the bother.

Anyways, I’m certain if Jack and I were speaking today we’d have the same argument over the graffiti controversy alluded to above.

Mac Donald’s long City Journal essay is far more controlled than the vituperative hip-hip-hooray it provoked for The New Criterion’s May “Notes and Comments” section, but the point is the same: graffiti is “defacement art” that symbolizes the decay of decent society. Mac Donald’s jump-off is a long criticism of the show “Art in the Streets” at Los Angeles’ Museum of Contemporary Art, not only the pieces displayed but the hypocrisy of MOCA and its new director Jeffrey Deitch for the very idea.

I happen to generally admire Mac Donald’s writing—and that contained in The New Criterion as well—and can’t argue with her salient point that while MOCA proudly hangs graffiti on its walls, the museum prohibits visitors from taking notes while on the premises and is quick to paint over any graffiti on its outside walls. And she’s right that operators like Deitch—a millionaire art agent and former Soho gallery owner—embrace this “defacement art” and its creators to make a buck by selling it to affluent collectors who desire a touch of what they laughably believe is au courant in their home. Also, the “graffiti vandals” themselves, who rail against The Man, but who aren’t averse to selling their work to corporations and “stuff[ing] their bank accounts,” aren’t entirely virtuous.

Nevertheless, the following paragraph from Mac Donald strikes me as quite reactionary and somewhat hysterical:

Graffiti is the bane of cities. A neighborhood that has succumbed to graffiti telegraphs to the world that social and parental control there has broken down. Potential customers shun graffiti-ridden commercial strips if they can; so do most merchants, fearing shoplifting and robberies. Law-abiding residents avoid graffiti-blighted public parks, driven away by the spirit-killing ugliness of graffiti as much as by its criminality.

I am a law-abiding citizen and while living in Manhattan did not “shun” Central Park, where the surfeit of graffiti was far less offensive to me than seeing someone jerk off in public, for example, or, on a summer day, the thousands of people wearing very little clothing, even if their guts revealed more rolls of fat than Yankees pitcher Bartolo Colon. And what’s uglier than the scaffolding (a racket, so to speak, that rotates from neighborhood to neighborhood) that envelops luxurious apartment buildings throughout the city? Here in Baltimore, there’s not the plethora of graffiti that one sees—and if you’re like me, enjoys—on nearly every street in Manhattan, but it’s ubiquitous nonetheless, whether on boarded-up homes or shops, mailboxes, utility poles or sidewalks. The writer in The New Criterion sneers from on high: “You cannot see the stencil-like scrawls without thinking of the perfectly innocent public structure that was marred by some spray-paint-wielding hooligan.”

In the unlikely event that such a “hooligan” tagged my house, I’d be cheesed off as well, and I don’t endorse the decoration of ongoing commercial or public enterprises or buildings. And if the perpetrators are apprehended by the police, well, that’s the chance they take, and the legal consequences that go with it. Yet, contrary to Mac Donald’s assertion about neighborhoods succumbing to graffiti, often it’s the neighborhood that’s fallen into disrepair and despair long before the graffiti “hooligans” brighten it up. In any city that was bludgeoned by riots in the 1960s—Washington, D.C., New York, Newark, Baltimore, Detroit, Philadelphia—there are acres upon acres of blighted land to this day, and the respective governments haven written them off as a problem impossible to conquer. That’s not really true, for as I’ve written before, if the mayor of a city offered enough incentives to both commercial and private investors to renovate abandoned houses and storefronts, much of the “spirit-killing ugliness” that’s represented by busted windows and former front lawns now reduced to tiny garbage dumps, would disappear. Graffiti—the best of which is really no different than legal advertising on billboards and posters—is hardly the biggest problem.