My Right To Take Away Yours

Forget deficits: Republican majorities across the country are going after women. 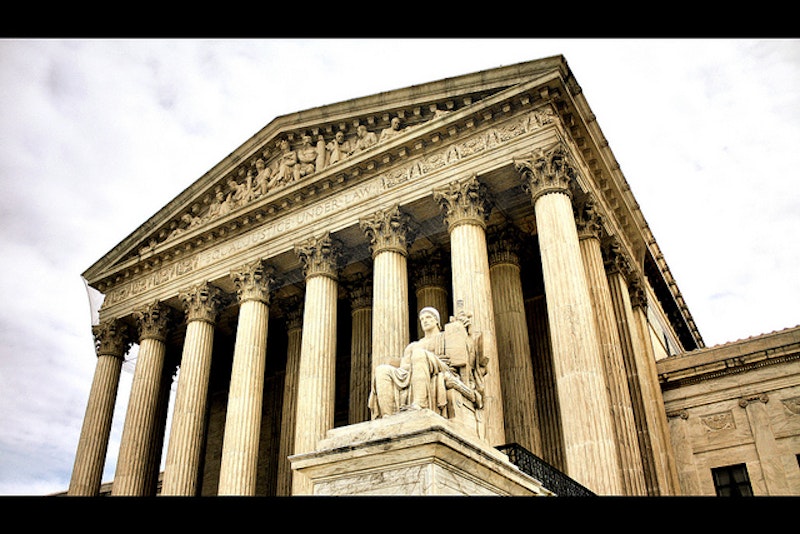 America’s culture wars are a sick joke. When the U.S. Supreme Court issued its Roe vs. Wade ruling in 1973, the very fine point on the argument was the issue of personal privacy and keeping government out of America’s bedrooms (and other crash pads). And now, several states not only want to re-enter the bedroom but get between the sheets as well. Reproductive rights would no longer be a matter between a woman and her doctor but a dictate from governors and legislatures, precisely the bureaucratic intrusion that the high court sought to prevent.

Their intent is to force the issue, a matter of settled law for decades, through the courts on appeal in the hopes of getting abortion, once again, before the Supreme Court while a 5-4 conservative majority still prevails and the opportunity to overturn Roe vs. Wade exists. If President Obama is reelected—and the odds, the polls and Republican disarray currently favor that likelihood—chances are that he’ll get to appoint one, two, maybe even three new justices to re-stack the aging high court of lifetime appointees for years to come.

Opponents of abortion, in all of its manifestations, for whatever reasons, are attacking the procedure as well as the concept from two angles of the debate—defunding Planned Parenthood and deconstructing Medicaid as we know it. By one estimate, there are 570 anti-abortion bills before the legislatures in 48 states. These groups and individuals are essentially creating a straw-man argument because federal law, through the Hyde Amendment, already prevents the use of federal funds for abortions. Nonetheless, it is through these arguments that they hope to provoke a court test, especially in the 29 states with Republican governors and the 26 states where the GOP controls the legislatures.

Planned Parenthood has said it will appeal any attempt to cut its funding, especially in Indiana, where a newly enacted proposal would prohibit the state from contracting with any organization that provides abortion services. A federal judge has refused to block the law. The next step is an appeal. The Republican governor of Indiana, Mitch Daniels, is a former Bush Administration budget official who is considering running for president.

By its own account, about three percent of Planned Parenthood’s services involve abortion. The rest of its offerings are based on family planning counseling and health services for low-income women, such as pelvic exams, breast exams, safe-sex counseling and infertility counseling, in many geographic areas the only such clinics available to poor women. Medicaid, the federal program in partnership with the states, provides health services for the poor and the elderly—these days mostly nursing home care—who have the right to choose any provider they wish. Presumably, the federal government would appeal any attempt to cut off funding to essentially what is a federal program. (Footnote: Mandates were born in the 1960s to prevent states from resisting federal programs and diverting funds away from programs and projects for which they were intended.)

The latest attack on the abortion issue via Planned Parenthood got its impetus through the budget proposal of Rep. Paul Ryan (R-WI) who, among other things, proposed eliminating Medicare and Medicaid as federal entitlements and replacing them with a voucher system of subsidies to purchase private insurance in the marketplace. The House, taking its cue from the plan and the strident rhetoric of Rep. Mike Pence (R-IN), voted to cut off all funds for Planned Parenthood, which the Republicans misrepresented as a primary provider of abortions. Planned Parenthood estimates that last year it received about one quarter of the total $317 million in so-called Title X funds—“Population Research and Voluntary Family Planning Programs” for low-income families. The Ryan plan has been solidly rejected by the public to the point where House Republican lawmakers have asked Obama and Democrats to refrain from mentioning it, one of the more amusing turnabouts in the debate over debt and deficits.

Perhaps the most outrageous assault on women as well as abortion is a law proposed in Texas. It would require a doctor to administer a sonogram to any woman considering an abortion and force her to view the pictures of the fetus as well as listen to the unborn’s heartbeat before making her final decision. Another proposal in Texas would place family planning clinics at the end of the list of those receiving family planning funds, effectively cutting off Planned Parenthood. Proposals in most other GOP-controlled states—North Carolina, New Hampshire, Kansas and Michigan, for example—would attempt to divert family planning funds away from Planned Parenthood by re-ordering priorities and, in effect, making the organization ineligible for public funds.

As the Republican party continues to contract into a narrow ideological cohort of the religious right, social conservatives and Tea Partiers with an assortment of gripes, the party is bereft of a moderate wing or a center. Abortion rights have always been a rallying point for the party’s right flank. The GOP’s national convention platforms have uniformly contained anti-abortion planks and its conservative candidates, across the board, have campaigned against the procedure as well as a woman’s right to choose. In doing so, the GOP risks losing the female vote, which is now the voting majority in America, especially the vote of suburban women, which is considered part of the influential and often decisive swing vote.

Maryland was one of the earliest states to adopt an abortion law, two years before the Roe vs. Wade ruling. The original law, enacted in 1970, was vetoed by Gov. Marvin Mandel (D) because of a variety of legal questions. It also happened to be, coincidentally, an election year. A corrected and legally tightened bill was enacted and signed into law the following year, in 1971. In 1991, the law was broadened and signed by Gov. William Donald Schaefer. It was petitioned to referendum by right-to-life activists but the referendum failed and the law has remained in force ever since, although there have been frequent challenges. In Maryland, abortion is legal until a fetus is considered viable. A fetus is viable when a physician determines that it can sustain survival outside the womb. Once that occurs, an abortion is illegal in Maryland. In the case of a minor, under 18, parental notification by a physician is required.

Very few people, if any at all, favor abortion per se. Many people, though, favor the right of a woman to choose to have the procedure. There is a difference, despite what the yammering know-nothings argue. Why anyone, or any group, would want a governor or a legislator in the bedroom making personal and medical decisions is a mystery. And why anyone would interfere with another’s right to choose is downright un-American. Leave it to Texas and Indiana, two primeval custodians of our manners and morals, to set the tone and the tactic for the debate over individual rights when they have no respect for those rights.