McCain Wants it Both Ways On Torture 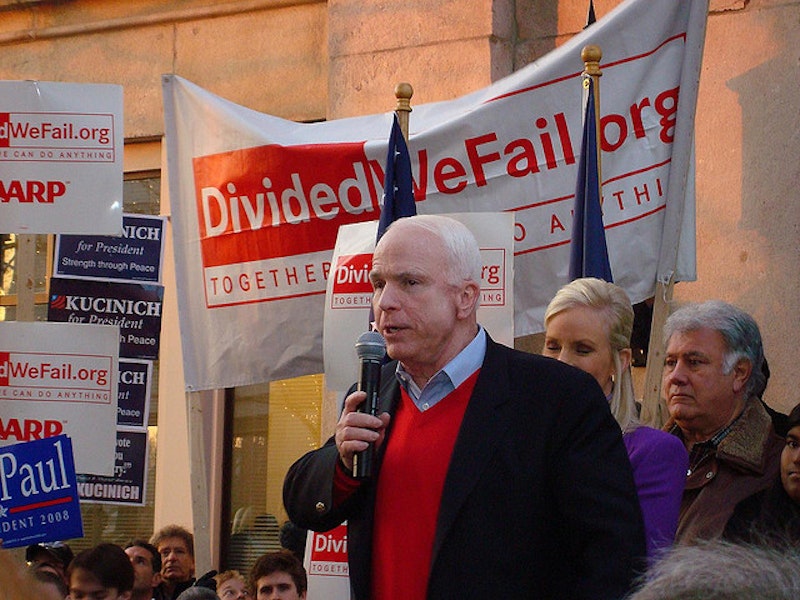 I used to really like John McCain. Sure, our political philosophies are different on a lot of counts, but I used to see him as a man of integrity, willing to cross party lines on key issues and vote his conscience. But not in recent years. Particularly since he lent his support to Bush in 2000 after nasty personal attacks on his family, I've felt his ethics were taking a backseat to political expediency.

This week, however, he wrote an editorial for The Washington Post that recalled the best of McCain. In it, he argued it was not torture that led us to bin Laden. According to the director of the CIA, the information that led us to courier Abu Ahmed al-Kuwaiti came from a detainee in another country who we do not believe was tortured. The information Khalid Sheik Mohammed gave us under duress, with the exception of the name, turned out to be misleading or false. No doubt valuable time was wasted following up on that fabricated intelligence.

But more important than the issue of torture's efficacy or utility, McCain argues, is its morality. He writes:

Individuals might forfeit their life as punishment for breaking laws, but even then, as recognized in our Constitution’s prohibition of cruel and unusual punishment, they are still entitled to respect for their basic human dignity, even if they have denied that respect to others... What I do mourn is what we lose when by official policy or official neglect we confuse or encourage those who fight this war for us to forget that best sense of ourselves.

Too bad his record just doesn't back up that sentiment.

In 2005, McCain introduced an amendment to the Defense Appropriations Bill that would have limited methods of interrogation used by intelligence agencies to those allowed in the military's Field Manual. In other words, no “enhanced interrogation techniques.” Bush threatened to veto the bill if it contained McCain's wording, but after negotiating with the Senator, agreed to sign. The catch was that he would do so with a signing statement that clarified his intention to reserve the presidential power to use torture to prevent further terrorist attacks. There was not a peep of protest from McCain, who instead went on MSNBC to say, “There are some people who are very, very bad people, and I think that to continue a program for some of them, without torture, is something that we can't deprive the President of the United States of.”

Then there was McCain's support of the Military Commissions Act in 2006, which, in addition to allowing US citizens to be stripped of habeas corpus rights by declaring them enemy combatants, retroactively protected US government agents who had committed war crimes before 2005. It also approved the CIA program that had allowed waterboarding and allowed the Executive to define Geneva Convention violations without any opportunity for redress in the courts.

McCain also voted against the Intelligence Authorization Act in 2008, a bill that would have required all intelligence agencies to adhere to the interrogations standards laid out in the Army's Field Manual. McCain defended his stance by saying the intelligence agencies should have access to more techniques, so long as they are not torture. Of course, having many times stated on record that practices like waterboarding, stress positions and sleep deprivation, some of which he experienced himself as a POW, were absolutely torture, his position seems nonsensical at best and hypocritically calculating at worst.

I'm afraid you can't have it both ways, Mr. McCain. If you truly believe that torture is morally repugnant and hurts our image and the safety of our soldiers abroad, then you must always oppose it. Whether a CIA officer or an Army soldier is doing the waterboarding doesn't make it any less of an offense against human dignity. Our potential enemies and allies will certainly not make the distinction. They will only see Americans as hypocrites and torturers. And we can hardly argue with them when people like you are writing pretty words about the ethical American character while sanctioning human rights abuses.