The Insidious Appeal of Identity Politics

We live in a political climate that is measured in minutes. 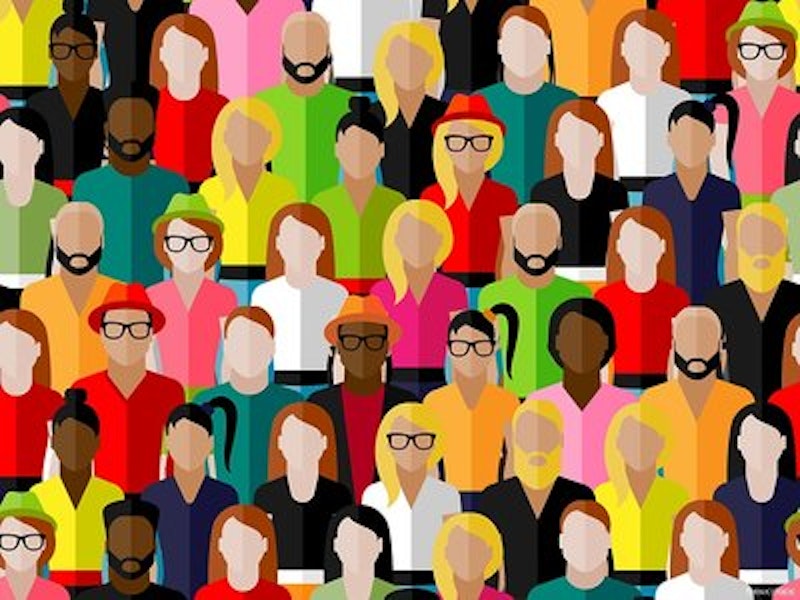 Adherents to identity politics have presumably never read (or at least blindly misinterpreted) George Orwell’s 1942 essay “Looking Back on the Spanish War” in which he writes: “Nazi theory specifically denies that such thing as ‘the truth’ exists. There is, for instance, no such thing as ‘science’. There is only ‘German science’, ‘Jewish science’ etc. The implied objective of this line of thought is a world in which the leader, or some ruling clique, control, not only the future, but the past.”

I’m a heterosexual, white male. Just for this crime, some will stop reading, or denounce me as biased, unjustly privileged, racist, xenophobic, transphobic, homophobic and misogynistic. As Grayson Perry says in his recent book The Descent of Man (in full agreement with the intersectional feminist mob), “Objectivity is male subjectivity.” Simply for existing, I am, as a political writer, already at a disadvantage, and must be judged as suspect. Like many who refute the far right, but can’t abide the insanity of the far left, I find myself in a quandary.

In Helen Pluckrose’s blistering essay “How French ‘Intellectuals’ Ruined the West: Postmodernism and its Impact, Explained,” postmodernism (as she understands it) states: “Shared humanity and individuality are essentially illusions and people are propagators or victims of discourses depending on their social position; a position which is dependent on identity far more than their individual engagement with society. Morality is culturally relative, as is reality itself. Empirical evidence is suspect… far more important is the lived experience, narrative and beliefs of ‘marginalised’ groups all of which are equally ‘true’ but must now be privileged over Enlightenment values to reverse an oppressive, unjust and entirely arbitrary social construction of reality, morality and knowledge.”

When victimhood is currency, there’s an incentive to create as much of it as you can, as is the case with bestselling feminist writer Laurie Penny (best known for her hit pieces on Milo Yiannopoulos). Penny writes in Bitch Doctrine: “Any writer who claims objectivity is lying to you or to themselves, or both. I have never held with the notion of objective journalism: too often that’s a modesty slip for the enduring suspicion that only a certain sort of well-to-do Western man can possibly have a viewpoint worth listening to.” She continues: “Women of colour, indigenous women, trans women, poor and working class women are never asked to speak for “all women”—even though they have more right to do so.” (Italics mine).

Penny remains an editor for The New Statesman, whose head book reviewer is the philosopher John Gray, author of (among other critiques of utopian politics), The Silence of Animals: On Progress and other Modern Myths. One wonders how Gray reacted to such statements as this one on gender fluidity from Bitch Doctrine:

“We can only become what we can imagine and we can only imagine what we articulate. That’s why language matters to our lives; that’s why little changes in grammar and vocabulary can affect the entire architecture of our political imagination. Today, signing ‘Mx’ on an application form or an electricity bill is an act of linguistic rebellion but tomorrow it could be ordinary. And that is how you change the world.”

Humanity cannot control human destiny, as Gray eloquently, if disturbingly, written about since at least his 2003 masterpiece Straw Dogs: Thoughts on Human Beings and Other Animals. Penny’s increasingly utopian vision of intersectional feminism conquering the world may have something in common with the fate of Icarus flying too close to the sun. I’d love to visit the offices of The New Statesman, eavesdropping on the strange conversations these two writers, with such polarised views, may be having.

Mick Hume writes in Trigger Warning: Has the Fear of Being Offensive Killed Free Speech?: “(Identity politics) expresses the notion that only certain people should have the right to speak about certain issues, that the ‘privileged’ should not presume to talk about issues of oppression and inequality. It is about identity groups claiming a monopoly on the truth about themselves”.

This could explain the appeal of the transgender movement, whose fiercely defined self-identity can be weaponized against a common (although by and large fictional) enemy, and is also, should the cosmetic surgery be convincing, a doorway to a position of prominence within the MSM. Just look at the stratospheric fame of Munroe Bergdorf, who, simply for being a reasonably convincing woman, is regarded as a vital social commentator for many on the left such as Guardian writer Owen Jones, despite her evident lack of talent.

If you replace the word “white” with “Jew” in any article on white privilege in BuzzFeed, Everyday Feminism or Teen Vogue, it seems like Left-leaning writers are far closer to Hitler than they’ll admit, despite their furious desire to “punch Nazis.” (Of course, by Nazi they apparently mean anybody to the right of Jeremy Corbyn or Bernie Sanders.) According to a viral meme about the 10 “facts” of white privilege, number 10 states: “You are racist. No matter what.”

In America, the facts are that between 1980 and 2008, 52.5 percent of homicide offenders were black, despite comprising only 12.2 percent of the population. And, in a statistic many would rather ignore, 93 percent of black homicide victims were killed by other black people. (Source: “Black and Unarmed: Behind the Numbers,” Heather MacDonald, The Marshall Project Feb 8th 2016) As MacDonald notes in her July, 2016 article “The Myths of Black Lives Matter” from The Wall Street Journal:

“The Black Lives Matter movement claims that white officers are especially prone to shooting innocent blacks due to racial bias, but this too is a myth. A March 2015 Justice Department report on the Philadelphia Police Department found that black and Hispanic officers were much more likely than white officers to shoot blacks based on “threat misperception’—that is, the mistaken belief that a civilian is armed.”

The devastating realities of drug dealing and drug addiction, and ready access to firearms in the US, mean that the road to a sustainable black middle class in America is not marred by a fictional white privilege myth, but by a fractured family structure and organized crime. The police are in fact the ones who risk their lives, day in, day out to protect the black community. As Milo Yiannopoulos writes in his controversial conservative manifesto Dangerous:

Despite being married to a black man, and calling, in the acknowledgements to his book, ingenious black rapper Azealia Banks “The older sister I never had,” Yiannopoulos is despised by the liberal media, dismissed by those who would rather chew glass than read his book as an Alt-Right, Neo-Nazi. Of course, Banks voted for Trump, so she’s simply the black face of white supremacy.

John Gray on cognitive dissonance: “Human beings do not deal with conflicting beliefs and perceptions by testing them against facts. They reduce the conflict by reinterpreting facts that challenge the beliefs to which they are not attached.”

The delusional mania of those in the grips of identity politics is alarming, and of course it was Hillary Clinton’s blanket dismissal of Trump voters as a “deplorables” that probably inspired the thousands of protest votes that cost her the election. In a speech at the Brisbane Writer’s Festival in September 2016, Lionel Shriver dismissed cultural appropriation as a fad and presciently noted:

“The left’s embrace of gotcha hypersensitivity inevitably invites backlash. Donald Trump appeals to people who have had it up to their eyeballs with being told what they can and what they cannot say.”

The rise of the right is worrying, and it is down to a censorious left agenda that stifles free speech, and affixes “phobic” to any statement, no matter how true, that threatens their socialist vision. James Lindsay recently wrote an article he called “Why I’m a Liberal Who Fights the Left, Even in the Age of Trump”:

“Right wing hardliners operate from a different cultural narrative which isn’t the one the left thinks it is, and they believe it essentially completely… It is primarily one of not having their minds changed by outsiders… Respond with all the moral condemnation you like… but please know: it still won’t work, and it will make things worse.”

We live in a political climate that, unlike other previous generations, is measured in minutes. It’s possible for lackluster minds to draw huge social media followings in short order, and one of these ways is to stick to the established liberal agenda. Identity politics has more in common with radical Islamism than anything else, a cult of personality that absolves you of personal responsibility for your failures, and gives you a clear enemy to oppose. The appeal of identity politics is obvious: If you have failed in life, don’t have the job you want, are poor, unhappy, it’s because of the white cis-hetero-patriarchy, and nothing to do with your own inherent mediocrity.