Hatred of Trump Isn’t Irrational, But Hysteria Is 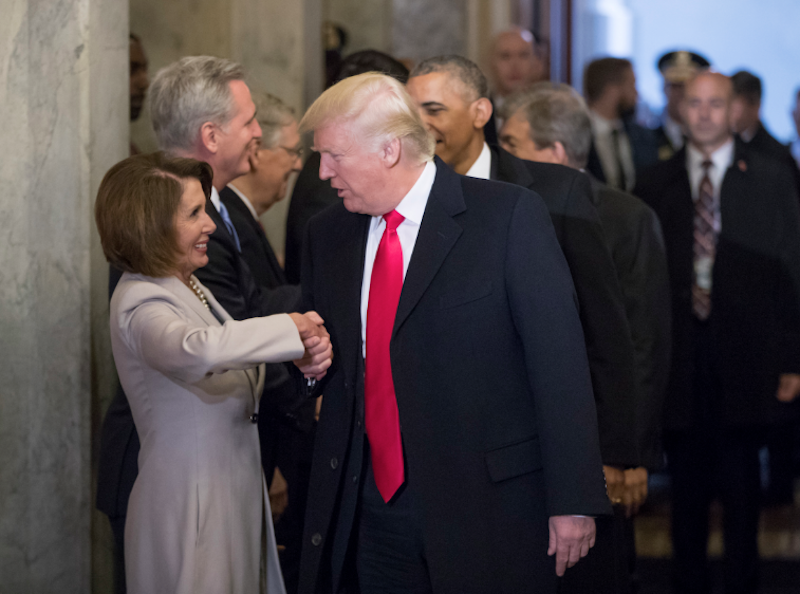 A contributor to the Letters section of the Florida Times-Union recently offered these thoughts on the Democrats’ negative emotional reaction to the presidency of Donald Trump: “The hatred for our president amazes me. How can you call yourself an American and actively work toward the downfall of an elected leader? If you are a true American, you make changes at the voting booth.”

Logical fallacy aside (“no true Scotsman”), these words sum up the often-heard argument that the Democrats have an irrational hatred of Trump. Oddly enough, most Republican voters expressing such sentiments about Trump detractors aren't aware of the torrent of irrational hatred directed for eight years against Barack Obama, much of it because he was black and smarter than most white Republican voters. That combination really pisses off a certain kind of person—the kind who's likely to belong to Trump's base.

Trump is vain, petty, vindictive, compulsively dishonest, hypocritical, bereft of empathy, intellectually lazy, authoritarian-leaning, unable to laugh at himself, divisive, racist, phony, ridiculously overconfident, perverted, sexually predatory, and unable to take the high road in a dispute. He used to invite convicted child molester Jeffrey Epstein to his pool parties at Mar-a-Lago, and was in the habit of walking into the dressing room to check out teenage girls in his beauty pageant, just because he could. By normal societal standards, our current president qualifies as a loathsome individual who should be shunned.

The problem occurs when Trump hatred boils over into Trump hysteria. This is often triggered by a Trump tweet, and it has no upside. A recent example was the widespread panic Trump caused when he responded to Kim Jong Il's assertion of having a nuclear button on his desk by saying he had a bigger button, and one that works. Many Democratic party partisans, and even some prominent neocons, seemed convinced that such “recklessness” risked sparking WWIII (they didn't specify who the combatants would be besides the U.S. and N. Korea), perhaps forgetting that Obama once told the North Koreans, “We could destroy you.” Ezra Klein, editor-at-large of left-leaning Vox, fatuously lobbied on Twitter to get Trump banned from the social media platform using the rationale that he'd violated its terms of service by warmongering.

The Russia investigation brings on Trump hysteria in a big way, as does Trump's treatment of the media. Democrats, in obsessing over every new Russia “development,” run the risk of hyping something that may turn out to be nothing. They'd be better off letting Robert Mueller do his job, and focus their energies on recovering from their awful performance in 2016, but that's painful, while banging the Russia drum gives them quick and easy endorphin bursts. Trump hates the media, like many presidents before him did. He's more vocal about it, but he hasn't limited any significant media freedoms. After eight years of the Obama presidency, Reporters Without Borders ranked the United States 41st in its 2016 World Press Freedom Index. When Obama took office, the U.S. was in 21st place.

One reason for Democrats not to let their emotions towards Trump morph into what some call Trump derangement Syndrome is the satisfaction it gives Trump voters. This is especially notable in light of the fact that so many Americans, behaving like fourth-graders, voted for Trump simply to piss off Democrats. This depressing development is a bad sign for the future of the American republic. Democrats cannot let themselves feed this trend. If they need to find safe spaces where to they can retire to when they feel TDS coming on, then so be it. In a private place shielded from Republican eyes, they can pass out Play-Doh and cookies and milk and play endless videos of the Obamas frolicking with Bo and Sunny. When they emerge, they can buck up and keep their composure.

The Democrats shouldn't concern themselves with the accusations that they're irrational in their hatred for Donald Trump. Harnessed properly, those emotions can work to their advantage. As their loss to him in 2016 demonstrated, the party's in disarray and not very attractive to voters. It's become a collection of competing tribes that can use any unifying edge it can get, especially since it shows no real signs it's learned much from its devastating defeat. Many are taught that all hatred is bad and that nothing good can come from it. Sure, this applies to hating Trump voters, but not the man himself. The hysteria, however, does make them look irrational, as do the incessant warnings about the media normalizing Trump. Trump's an elected president, and the media should treat him like they would any other elected president.

You can’t live on hate forever, but it's a motivational tool in the short run. It can win you a big football game, and sometimes even an election. So far it's helped bring out voters in Virginia and Alabama, providing the Democrats with two key electoral victories. Humans don't come equipped with the capacity for hatred for no reason. It can be a tool for survival. The hysteria, however, will make the Democratic Party look less attractive to many voters while simultaneously providing comfort to Republicans. It’ll wear them out and provide an excuse for not applying painful, yet essential, self-reflection to themselves.