Noah Berlatsky responds to the charge with defensiveness and name-calling. 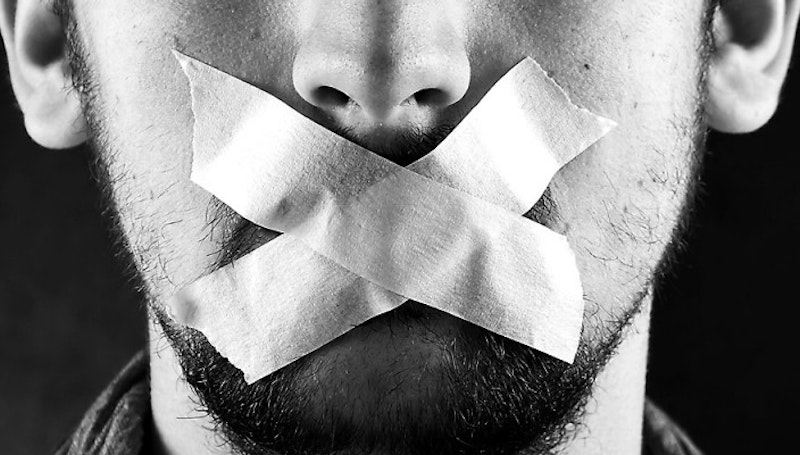 Left-wing lightning rod Freddie deBoer got fed up with a certain faction of his fellow lefties and vented his pent-up frustration in a piece he posted on Medium. DeBoer derisively calls the objects of his scorn “cops” because they feel compelled to police the thoughts and words of the less enlightened (which is almost everyone) in what’s often a competition to signal virtue. One aspect of this phenomenon is that those perceived to have the most privilege—white males—sometimes appear to be overcompensating for their undeserved status by protesting against imagined injustices at a slightly higher pitch than might be called for.

Brooklyn-based deBoer starts off by making the obvious connection between the political right and the compulsion to police people's private actions. Right-wingers value few conditions above law and order. They've long embraced such travesties as the failed War On Drugs and drug-testing of food stamp recipients because such policies provide them with the illusion that they make society a safer, more orderly place.

The writer calls alt-right provocateur Milo Yiannopoulos a “cop.” Then he calls Splice Today contributor Noah Berlatsky, a cop too —”a career cop,” in fact. “Morning, noon, and night — judging, indicting, sentencing, never doing anything else, ever.” It must’ve stung being lumped in with Yiannopoulos and called out for making a career out of nitpicking. Berlatsky fired right back with a snide rebuttal that, while intended to humble his tormentor, mostly affirmed his argument. Perhaps Berlatsky's unaware that calling your adversary a “fool,” “dunderheaded,” “dim,” and “sad little deBoer” makes you look petty. It's also out of place in a piece insisting that “recognizing people’s humanity is important,” and that constructive criticism should be done “in a way that actually does good rather than harm.” One would expect a proponent of such humanitarian sentiments to take the high road in a case like this, even if his pride had been wounded.

Calling someone who sees himself as a relentless soldier of justice a “cop” is far more cutting than a “dunderhead,” so score that one for deBoer. Perhaps Berlatsky’s pain was so acute that he couldn't suppress his worst instincts. The dig apparently hindered his thought process. He mockingly writes: “It is an outrage, says deBoer, that people accused of sexual harassment have their careers damaged.” I guess Berlatsky wants to live in a world where an accusation is tantamount to a guilty judgment. That situation would work out well for him and fellow self-appointed cops. They'd be spared the inconvenience of having to provide evidence before moving on to their next takedown.

Freddie deBoer’s tone is one of weary derision. He provides numerous examples to support his case, but Berlatsky responds mainly with putdowns—a sign of weakness. Calling deBoer “dim” is a playground tactic, satisfying only to the person writing it. People expect better craftsmanship from writers.

DeBoer’s able to see something that Berlatsky is blind to—that the left’s tribalism and petty infighting is fracturing the movement—because he comes from a background where leftism was defined differently. Before identity politics and intersectionality came into vogue, the left defined itself around economic matters. That was when a genderqueer person of color and a cis white male were fighting the same battle, as long as the ruling elites were suppressing their standard of living. There's no labor movement for the political left to mobilize behind now. They've shifted their focus to identity, and it's become an obsession. It's no longer one tribe of workers fighting for a bigger piece of the pie, but rather competing tribes lobbying for their own narrow interests. What more could Donald Trump ask for?

Call-out culture doesn't have that much interest in, or knowledge of, economic matters. Its members have convinced themselves that their highest calling is policing the oppressive behavior and language of the less virtuous. It's a losing game. Up against diminishing returns, their instinct is to scream louder, but it doesn't work. This must be depressing to deBoer, who has a close connection to the old left—the one that was capable of taking on the capitalists and achieving tangible gains for the working class.

Berlatsky claims that “writers... have a duty to criticize and protest and call for a better world,” but he’s referring to his own version of the perfect world. DeBoer’s also fighting for the dispossessed, but he fails the purity test so he’s become a target for public attacks. Call-out culture’s adherents are convinced they can hector the less virtuous into finally buckling to their collective will. They'll have won then, at which point they can start building the gulags for the stubborn few who resist their benevolent policing.

Perhaps call-out culture’s devotees are too enamored of the performance. Discussing things privately with people they disagree with isn't flashy. Trashing people publicly can provide a thrill and a feeling of power that might be difficult to give up. A response to deBoer’s article focusing more on defending call-out culture than on landing personal barbs would’ve been a more constructive approach—more interesting too. As Berlatsky specifically calls for constructive criticism that actually does good in his overwrought reply to deBoer, it's puzzling that he chose not to follow his own advice.