Paranoia strikes deep and is justified. 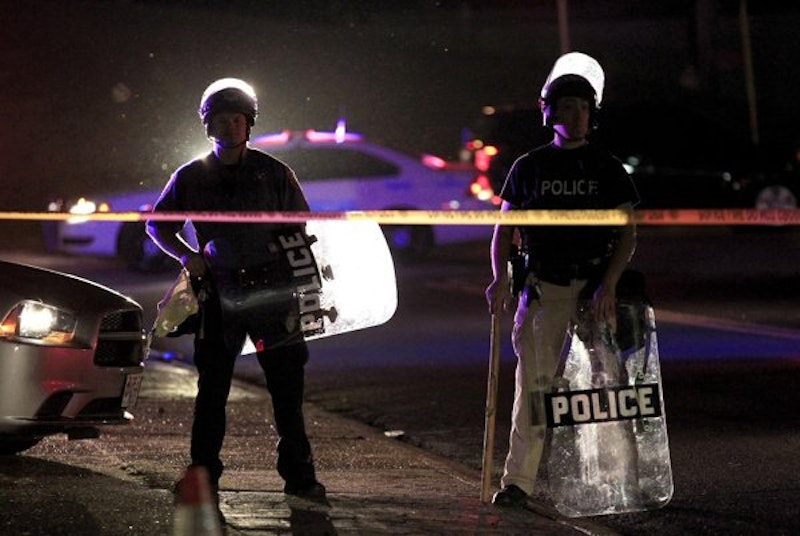 A line has been drawn in the sand. I picked the wrong week to start reading more Philip K. Dick books. The world is closing in on all fronts: first the senseless and still unexplained murder of Michael Brown by an unnamed and protected Ferguson, MO police officer, another example of armed and trigger-happy racist scum. It was dovetailed by the high profile and disturbing suicide of Robin Williams, ubiquitous in pop culture since the late-1970s and known most widely for his work in children’s movies like Flubber, Jumanji, Hook, Toys, and Jack. Not a meaningless or overblown celebrity death—the ultimate “sad clown” story has resulted in a sharp rise in calls to suicide prevention hotlines, something given to distract us from the transformation of Ferguson into a war zone over night. The death of Lauren Bacall the day after was another last-ditch effort to keep major media outlets clogged with irrelevant obituaries while people in Egypt and Gaza are tweeting at protestors in Missouri with advice on how to deal with tear gas. The world I see resembles the words I read. The idea of a incompetent paramilitary force assassinating or instigating the deaths of two famous people is hilarious, especially imagining them running out of options and having to pick off Lauren Bacall next.

You don’t feel the paranoia? Are you creeped out by Facebook and Twitter censoring Ferguson from your feed and its Trends? Reporters are being arrested, abused, shot at, detained without charges, released with nothing. Al Jazeera America’s van was shot at with tear gas, and after the crew fled, the storm troopers dismantled and confiscated their equipment. If you aren’t freaked out and pushed over the edge by this, can I check your head? No bugs under my skin. This is the most panicked, disgusted, horrified, and completely disoriented I’ve been since 9/11. All the excess machinery to kill and control has been hand-me-downed to any jurisdiction that wants it. Of course it was an inside job, a multi-decade plan to pacify and paralyze the public with fear to “go shopping,” play on the Internet, and dismiss significant events like Occupy Wall Street as naive failures run by idiot stoner lefties. The police response to Occupy was nothing compared to this. They’re escalating their forces too quickly, burning the frog before it’s begging to be boiled. This is our day to march, in every city, to express our outrage and horror at our country turning in on itself and treating the people it’s supposed to protect as threats.

“People don’t protest anymore,” is a common refrain. Bullshit. Last night I watched the military shoot unarmed protestors, hands raised, with flares, tear gas, small grenades, deafening sonic lasers, and rubber (please) bullets. This is what a rubber bullet does. Any volunteers to take one in the head? We’re living in a Philip K. Dick nightmare. If you live in Baltimore, there’s a march today organized by the Baltimore Bloc in solidarity with the family of Michael Brown, the people of Ferguson, and all victims of state terrorism and police brutality. It begins at six p.m. in front of BPD Headquarters (Baltimore and Gay Sts.). There will be a peaceful march down Baltimore St. ending at City Hall. I really feel like I’m in a waking nightmare, and we all must march and protest peacefully while we still can.