Holed Up and Hiding Like the Traitor I’m Not

Bennington escapes from beneath the Capitol and gets to know a sex worker and motel operator just outside of Washington, DC. 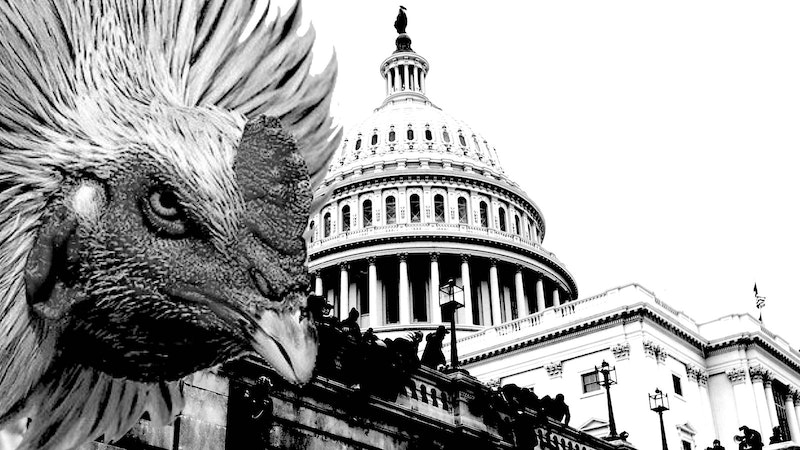 Being Bennington isn’t easy. In fact, it’s hard. I’ve struggled my whole life with “being myself,” and know I’m not alone. Nevertheless, this isolation causes me to act out and alienate others. I’ve burned so many bridges and destroyed so many friendships and intimate relationships, it makes my heart break a thousand times over—and that’s the glass that I live with, shards of my past cutting me open every day. I’m not asking for absolution, pity, or even sympathy. I just want to be alone, at last.

But first I had to help protect our government. Last week was kind of crazy: I joined in the storming of the Capitol, I missed most of the action and stuff you saw on the news and ended up in the basement of the building, wandering halls filled with cobwebs and bones, looking for Nancy Pelosi’s ice cream vault and whatever hard drives I could gather to sell later. You’d be surprised how much a random black hard drive that you say was recovered from the Capitol riot fetches on eBay. It’s, once again, kind of crazy: but of course eBay, in the tank for the Democrats (I’m assuming), nuked my auction before I could secure a cool $25,000 for a hard drive recovered “beneath” Nancy Pelosi’s office. Other people—“humans”—made out with merchandise from the building and got their cash. No such luck for the avian patriot.

So… I’m on a no-fly list. It’s not a big deal, but according to Rooster and his bitch wife Monica, it’s “kind of a big deal.” Monica tried to FaceTime me, and after I reminded her that I don’t do videophone, she sent me a photo of Ashli Babbit being shot in the neck and killed last week. “You let this happen you bawk fuck.” More pictures of the crime scene, a semi-ravaged marble hall with some detritus and traces of blood. “This is the carnage you and your Evil friends brought to this country. I hope you die in a car accident tonight.” I’ve never known a meaner woman than Monica, yet my cousin Rooster is reasonable, if risible. The mind reels, and I’ve known them for centuries. We’re all waiting for the divorce, believe me.

I’m writing this from a Ramada Inn outside of Washington, DC. I’m still not allowed to leave. I’m afraid to leave my hotel room and I’m going to run out of money tomorrow, so that’s why I’m writing this instead of publishing the second chapter of my novel. Don’t worry, it’s coming, I just have to solve the universe first and then we’ll be back to our regularly scheduled programming. Listening to the radio, I’m able to catch Maryland’s classic rock station 100.7 “The Bay,” and I’m struck by the skill of the late Leslie West and his band Mountain.

Of all things, The Bay was playing Mountain’s “You Can’t Get Away,” from their 1971 album Nantucket Sleighride. Frankly, I’m angry they’re not more well-known. Even better is “Tired Angels (For J.M.H.),” the song that follows “You Can’t Get Away” on that LP and closes out the first side. This is a man who knew his riffs, and he knew economy. But he didn’t show off, he didn’t have an angle, a pose, a tic, a girl to show off. Maybe he did, I don’t know, I guess I just remember discovering him via Howard Stern sometime in the 1990s, which is pretty embarrassing in itself, so I’ll leave it at that. I was happy to hear Leslie over the radio again, and I hope he’s happy on whatever mountain he ended up on.

Then my hooker walked in—sorry, “sex worker.” I’m still getting used to all of this new terminology. You have to remember that while I look, sound, and feel young, I’m several hundred years old, and at this point in my life, I really would just like to get things over with. Zola (I asked for someone who knew how to read) walked in and threw her handbag at me: “I knew before I saw the place that you were in the Capitol last week. I’m going to tell everyone that you tried to burn my eyes out with a blowtorch. But I guess I could just eat you alive. It’s been a while since I’ve had anything to eat.”

All I could think was I said one who could read…not one who was on speed… But I persevered. “Don’t you want a drink or something? I wasn’t there. Really.” She started looking in my closet (rude!). She threw more things at me. “Okay, why do you have a t-shirt that says ‘I Survived the Capitol Siege of 2021’?” I told her: “Because I did.” I explained (lied) that I was there as surveillance, espionage, reconnaissance, and that I’d been contracted by the Belgian government to spy on American radicals to gain intel and also to disrupt the ratification of the election. “You have to understand, Lyndsay, everything comes back to the Bush family.” I told her all about the canals and oil miles and salt fields and Congolese cobalt miners and the ATF and the cement trucks full of gasoline and sawdust and the protocol for Air Traffic Control when American airspace has been breached. “You mean they have to just shoot the plane down?” Yes, I said: this is what separates the men from the boys, the chicks from the hens, the tendies from the true roosters. It happened on [REDACTED], and it’ll probably happen again, maybe on [REDACTED].

Lyndsay left with a tip. Of course we made it, but I’m not going to talk about that shit, it’s personal. Everyone is so lascivious and sanctimonious on the Internet now, it’s so weird. They’re like… mad about being so horny. It’s fine, just go outside and ask someone what their favorite color of Sprite is. When they respond “What?” you’ve instantly opened a dialogue, a conversation has begun. This can lead to marriage, or, in the minds of the gutter hounds, to sexual intercourse. I prefer to imagine couples living happily ever after. I offered another unsolicited dating tip to the horrifying bloated man working the register: “Always ask a lady if she’s been to Japan. If she hasn’t, you’re basically golden. You can say anything and she’ll be fixated on you.”

He took me by surprise when he said he was gay, but still had problems finding a date. “Listen, I don’t know if this will work with you, but my cousin’s wife convinced him to marry her by buying him a decade’s supply of China white heroin. But this was in the 1930s, or something, I don’t remember—” Of course I was lying, I knew nothing about Rooster and Monica’s courtship (why would anyone ever subject themselves to reading about those two red sociopaths?), but I wanted to make this old fat gay guy feel loved. I wasn’t going to fuck him, but I was willing to give some dating advice. He frowned and asked me, with wet eyes, “I can’t find anyone as racist as me. It’s hard. I was at the Capitol last week. Not enough. Personally I don’t think we should stop at—”

I was out the door before I could pay my bill. My bag and my pills were still in the room, but I didn’t care: I’m not going to stay in a motel owned and operated by a racist. There’s a lot that I’ll do, and Lord knows my standards sink to the bottom of the ocean floor once money and/or drugs and/or sex with particular mechanical devices is involved, but I will not support racists. I hitchhiked all night up to Baltimore and knocked on my friend Nicky’s door. It was nine a.m. and he wasn’t up yet—or so he said later. He sounded sincere, but I can’t help but always feel like someone is watching me, and I have no privacy. Nicky probably knows where I am right now, and maybe he knows that I be up playin’ with my shit. Yeah, Nicky: caca, doodoo, dookie, mush. Are you satisfied now? Are you tired of looking at my screen, waiting for me to fuck up so you can take me in?

Try me, motherfuckers. Trust the plan. What’s the plan, you ask? Make Bennington God. Any problems? Any questions? You can direct them to the sky. Bennington out.