As part of the Intellectual Dark Web he’s a target. 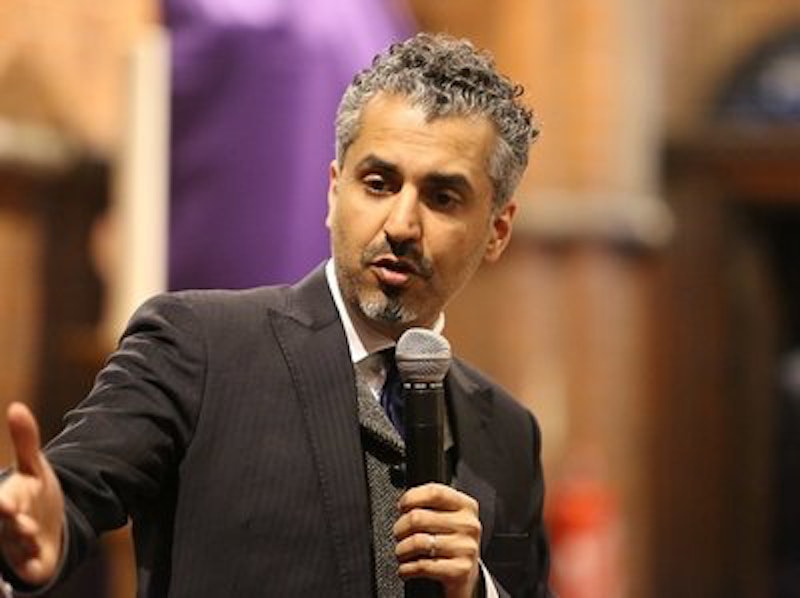 From the shelter of their high-GDP coastal enclaves, the voices of the Left console themselves by offering regular reminders that Trumpists are all racist yokels. The New York Times, long a reliable provider of daily affirmations of their worldview, has mixed it up and is now running op-eds that present such abominations as the Intellectual Dark Web in a positive light. Nothing is sacred any more.

The Intellectual Dark Web is, the liberals assure us, just an irrelevant bunch of right-wing racists and sexists reacting petulantly to their loss of status in the reconfigured political landscape—someone moved their cheese so they're having a collective temper tantrum. Maajid Nawaz, a British Islam reformer and founder of the counter-extremism organization, Quilliam, is a member of this loose network of thinkers that has so many left-leaning pundits in a defensive tizzy, but he interferes with the narrative because that he's dark-skinned, not a conservative, and was raised as a Muslim. He's also not a right-winger, like a number of other IDW cardholders.

How the Left deals with such inconvenient information is illustrated by a recent Guardian piece that presented conspiracy theorist Alex Jones as the face of the Intellectual Dark Web, which it ludicrously called the “supposed thinking wing of the alt-right.” This implies some sort of intellectual connection between the kooky radio show host and Nawaz, which is preposterous. Dishonestly smearing someone, or an entire group, you dislike is much safer than engaging with their actual ideas—when you engage, you risk exposure.

The IDW is a politically diverse group of men and women of various ethnicities and religious affiliations who believe in having civil conversations with those they disagree with and share an aversion to identity politics and groupthink (unlike, say, the intellectual giants at Vox). Nawaz has a talent for attracting name-callers on the progressive side, perhaps because he coined the derogatory political designation “the regressive Left,” a term so on the money that it renders its targets verklempt. He also came up with “the control Left," which causes them almost as much pain—so much pain that Murtaza Husain of Glenn Greenwald's Intercept called Nawaz a “well-coiffed talking monkey,” “native informant,” and a “porch monkey,” which is a Jim-Crow-era slang term referring to the alleged laziness of black people. Husain never apologized, because you don't do that at the morally impeccable Intercept.

Reformed former Islamist Nawaz is a target for the regressive Left because he’s one of the few liberals with the temerity to defy their hard restriction against criticizing their protected religion, Islam, in any way. Were he a liberal who’d lost his Christian faith and dedicated himself to critiquing that religion in the name of reform, he'd be a person of color speaking truth to power—a hero. But a Muslim pointing out things like how many British Muslims sympathize with suicide bombers and jihadists is the equivalent of the despised “house Negro.”

Islam’s in need of reform, and not just because certain Muslims take some passages in the Qur'an too literally and resort to violence. In Indonesia, touted as a “moderate Muslim” nation, gay couples are publicly caned and politicians are jailed on trumped-up blasphemy charges. Nawaz, a former extremist who spent four years in an Egyptian prison for his terrorist connections, has unique qualifications to work towards a more peaceful and tolerant version of Islam, something that certainly would be welcomed by many Muslims, especially the LGBT, females, and closeted non-believers who often risk death if their secret’s revealed.

But the Left, abandoning these marginalized groups they normally champion, will brook no criticism of Islam. In 2016, the Southern Poverty Law Center, a politically-driven organization that's somehow still considered the arbiter of who is and isn't a bigot, absurdly put Nawaz, who identifies as a Muslim, on its list of 15 “anti-Muslim extremists” along with rabid Muslim-hater Pam Geller in an act of McCarthyism he's suing the organization for now.

Ironically, for all the abuse he takes from the confused Left, Nawaz doesn't claim that Islam itself is a problem, as do Sam Harris and Ayaan Hirsi Ali. He's also argued publicly for the proposition that Islam is a religion of peace and taken on those who claim that Muslims are gaining too much political clout in the U.K. What the once-respectable SPLC and its adherents fail to grasp is that attempts to discredit reformist voices just makes the voices of the Pam Gellers of the world even louder.

Quilliam studies how British prisons have become incubators for terrorists, meaning Nawaz is someone progressives should naturally align with. What's happened instead is that the Left has made fighting Islamophobia (a word that's so broadly interpreted that it’s meaningless) the priority, not the ushering of an unreformed religion into the 21st century. Nawaz’s opponents get hung up on him saying things like there's a connection between Islam and Islamism, as that violates their party line. They somehow think they can convince people there's no connection between a religion and its extremists.

Maajid Nawaz violates the progressives’ rules of identity politics by not behaving like a brown-skinned Muslims are supposed to. That's unacceptable, so he must pay a price. Now that the Left’s frenzy over the Intellectual Dark Web’s underway, you'll hear more cheap smear attempts on Nawaz because he scares them. Progressives shutting down conversations by calling everyone a racist has become tiresome, and people like Nawaz offer an alternative to that.