Love the Royals, Hate the Republicans

Media celebrity Tina Brown is extraordinarily agile: one day she'll bash wealthy Americans, and the next wax flowery about Prince William and his future bride. 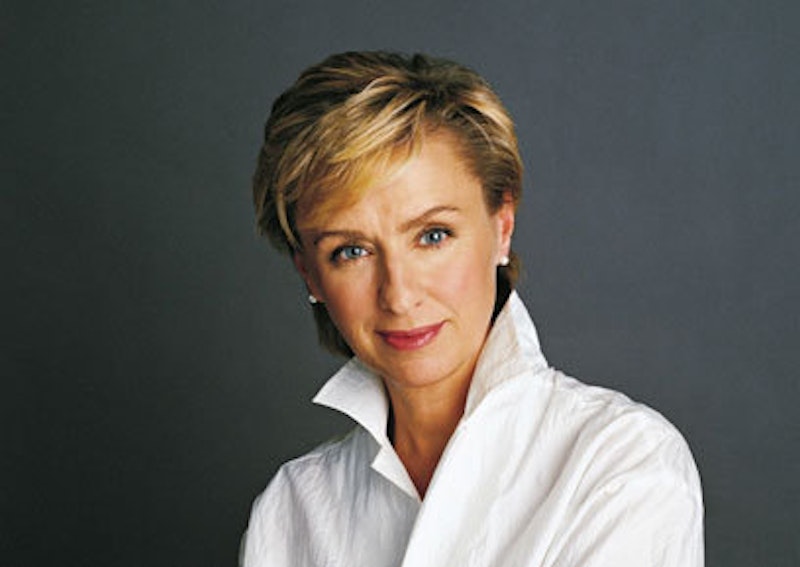 There’s only one certainty in the event of a nuclear war: Tina Brown will survive. She’s like a cockroach, and much as I dislike her writing and gauche, self-aggrandizing public relations stunts, this isn’t meant as a pejorative. Brown’s an original and it won’t be the least bit surprising if at age 90, in 2043, she’ll unveil to lavish fanfare some glitzy new product, financed of course by some smitten billionaire (perhaps an aging James Murdoch). As the Daily Beast/Newsweek editrix might say, good on you, gal!

Yet to characterize the thoughts Brown releases for public consumption as schizophrenic would be a grand understatement. On the one hand, she’s a staunch President Obama supporter (she calls him ‘Bam; I’ve no idea if she’s in the White House “kitchen cabinet”), who, the day before the election offered the President an earful of advice. “Obama has, as he wanly insists, accomplished a lot in the last two years… all with absolutely no help and nothing but obstruction from the people who are about to collect the big political rewards… Obama may think that donors who pout if they don’t get perks beyond the satisfaction of knowing they’re helping their country are jerks, but social access, as Bill Clinton knew all too well, is a golden tool. A night in the Lincoln Bedroom is a better deal for the public than a zillion-dollar rich guy tax break or a fat no-bid contract, which is what the Republicans offer.

Never mind that Barry Diller, the man who bankrolls Brown’s Daily Beast website, is worth $1.2 billion and, like most people who’ve accumulated that amount of wealth, probably forks over a pittance in taxes to the U.S. government. And while the “little people” (Brown does remind me of Leona Helmsley) who voted for Republicans two weeks ago won’t “collect” any “big political rewards,” that’s just a trifling detail to a Human Cocktail like Brown.

Granted, Lady Brown grew up in a London suburb (she emigrated to American in 1984 and took U.S. citizenship in ’05, and lives with husband Sir Harry Evans in Manhattan), but she’s a Royal hag of the first order. She’s the author of The Diana Chronicles and when the Princess was still among the living, her mug (and “zillion-dollar” wardrobe”) was all over whatever magazine Brown was editing at the time. And so, with the who-cares announcement of Prince William’s upcoming marriage to Kate Middleton, Brown was full-throttle in laying out the glory for Daily Beast readers. I won’t bore you with excess examples of Brown’ infatuation with “Wills” and his “resilient” fiancé, but here’s one for the road: “England needs the joy of a royal wedding as badly as it did 30 years ago, when we watched enthralled as Charles and Di tied the knot.” Oh, and Brown thinks it’d be a swell touch if their wedding is “green.”

So, on the one hand Brown reviles rich Republicans in the United States (some of whom actually worked for their money, and created jobs, rather than inheriting it like the Royal Family), but gets mushy when writing about a prince and future princess who’ll do nothing for their country save provide fodder for the media and preside over obligatory charity events. Like I said, Lady Brown’s a pip, all right, and, to her credit, she’s sublimely adept at getting away with this blatant hypocrisy.