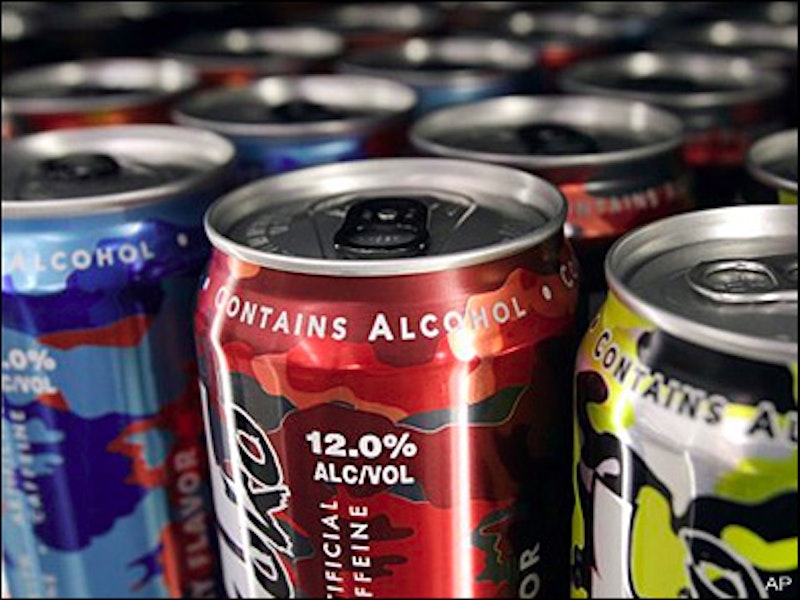 If the Food and Drug Administration were to slap some sort of macabre decal on a resplendent can of Four Loko as part of a push to raise awareness of the beverage's stupidity/lethality—not unlike what Jessica Ocheltree reported on here—what would it look like?

Per my unofficial Google chat survey:

“it would be a picture of a frat boy barfing”

“it would look like a wimp. four loko rules”

“a co-ed passed out in vomit”

"We have an obligation to keep products that are potentially hazardous off the shelves," said Dennis Rosen, the liquor authority's chairman, "and there is simply not enough research to show that these products are safe."

Right. The moral equivalences abound, and they are killing us all—quicker than a caffeinated malt beverage, perhaps.
I have only imbibed Four Loko once. The result: near-instant brown out, so perhaps the FDA decal should be a crossed-out lightning bolt superimposed over an outline of the state of California. Much like Pharm Parties and digital drugs, the banning of Four Loko is a mixture of draconian conservatism, moral panic and nanny statism.

I understand that we don’t live in a perfect “free markets, free minds” kind of world. Anyone who closely follows news and politics and policy is apt to—consciously or unconsciously—come across some statement, some position that doesn’t quite hold up with the more basic tenets of, loosely put, liberalism, conservatism or libertarianism. Finding a balance between what you believe to be right and what you know to be empirically true is pretty difficult. I hope the ridiculousness of such a ban—as well as the notion that the government can tell you what to buy with your food stamps—wakes at least a few people up to the perniciousness of micromanaging human behavior through bureaucratic diktat.

The same anecdotal grapevine that brought all sorts of hilarious stories and YouTube videos is now bringing word that young persons across the country are already buying Four Loko by the case, stocking up for either personal use or—and this is from the mouths of at least two guys I met at a party—for resale. As much as $15 a can. Combine that with running cigarettes from North Carolina to New York City and you can make yourself a genuine Nucky Thompson.

Actually, I know just the crew to make this happen. You see, in high school, one of my closest friends went to a pretty intense Catholic school—like, Opus Dei intense. And at this school there were a group of young men who fancied themselves modern day gangsters. They’d steal xBoxes and games from the old KB Toys at Montgomery Mall and sell them around town. Didn’t matter that they were already stupidly rich to begin with. Get this: one day the leader of this group decides that my friend looks exactly like his friend who got killed in jail. This leader took my friend under his wing and gave him hundreds of dollars for clothes and food and the like. (They also loved lacing their marijuana with what was probably some iteration of Drano). When my friend finally came to his senses and realized these guys were (and probably still are) fucking nuts, they wouldn’t let him outta the game. Slashed his tires, broke the windows at his house. These boys meant business. They’d be perfect for a Four Loko Ring. They’re such upstanding young gentlemen. Who would suspect a thing?