Locked Down vs. Off Grid

They want us governable, not necessarily healthy. 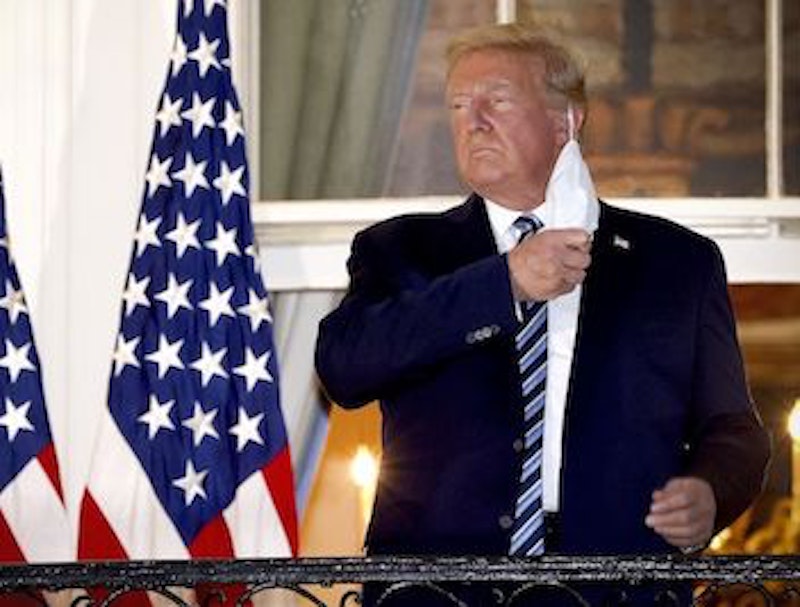 Remember all the way back to March 26, when the media and establishment were so much more cavalier about COVID than Trump is that, when he warned the virus is “an invisible enemy,” the knee-jerk reaction from the mainstream know-it-alls was to suggest Trump was using language that stokes anti-Semitic paranoia? How their priorities and favorite scare tactics have changed since!

Now they consider Trump a reckless “super-spreader” maniac if he predicts he and members of the White House staff who’ve recently tested positive for COVID will probably live—which, like people contracting an especially bad flu, they have around a 99 percent chance of doing unless they’re about 80 years old or so, in which case it’s slightly lower, like 95 percent.

This shifting and shifty establishment—the one you likely still trust to advise you on masks, the economy, climate, race relations, and everything else—is startlingly unified in its message-of-the-day but startlingly inconsistent when viewed over time by those few people who still have long-term memory. In the era of major-media onslaughts and social-media nudges, the establishment plays you like a fiddle, you pathetic sap, and no matter how blatant its changes in tune, you pride yourself on dancing along on cue. You think that willful amnesia is what makes you a virtuous citizen, part of the tribe.

The message that the establishment knows best—and should be obeyed no matter what battle it asks servile fanatics to fight next—is now so commonplace in centrist circles that it will be no great surprise if the next shift is to the message that both Trump and Biden (even though the latter proudly tested negative for COVID) are too ill and dazed to carry on with politics (the precise date of the handoff in presidential power perhaps lost in the shuffle of late ballots and lawsuits anyway) and thus that the “real” political contest this season is between their running mates, Mike Pence and Kamala Harris.

I wouldn’t be surprised if we then got a new iteration of the perennial call for a “unity ticket” putting Pence and Harris in the presidential and vice presidential slots respectively (with or without a tiresome election, which will likely see very low turnout anyway). The media would sell such a ticket and/or electoral contest (it almost doesn’t matter which) as a welcome return to social harmony, but it would also, as if by coincidence, be one of the biggest possible wins for the military-industrial complex (particularly in the form of Pence) and heavy reliance on prisons (particularly in the form of Harris).

Before some almost inevitable version of that post-COVID world (or forever-COVID world, one in “permanent lockdown”) arrives—with the Department of Defense already tasked for vaccine distribution and police contemplating ever more drones, control cordons, and surveillance methods—you might consider fleeing into the woods if you can. You might at least ditch your entire online presence, given how trackable and controllable it makes you. Lord knows I’d be tempted to become a forest ranger or simply a hermit, perhaps with a pet marmot, if I had it all to do over again. (Marmots are friendly and, foolishly or not, do not fear humans.)

Before you habitually dismiss such an idea as crazy-loner militia-man talk, as it might have sounded pre-COVID, pause to think about how great a thrill it would be nowadays just to live, work, and move freely outdoors—ideally without rioters, riot cops, or regulators around, all of them anathema to relaxed, casual living (and breathing).

Far from continued dwelling within this society being an assurance of sanity, it now means mentally training oneself to accept absurdities such as the Pennsylvania governor and a state rep laughing on a hot microphone over engaging in the “political theater” of being seen briefly with their anti-COVID masks on—even though they both planned to remove them immediately.

Being part of this society means listening to people fantasize about launching yet another physical attack on Sen. Rand Paul because, say, he had the audacity to grill Dr. Fauci about how many non-fatal COVID cases we have to rack up before admitting we’re approximating something akin to herd immunity. (Herd immunity is a tendency, not a precise number known only to Fauci and his ilk. There’s no strict formula for saying you’ve suddenly achieved it like a magic spell. It’s less like an SAT score and more like a sloppy property such as “traction.” It helps, in short, but there will never be a precise point at which science says, “That’s help enough! We’re in the clear!” We just have to decide when we’re willing to put up with a few residual illnesses to end the implosion of the economy and all the secondary deaths that go with that implosion.)

Playing along with this society means accepting that a mere website error led the CDC to proclaim airborne contracting of COVID a problem and six-foot distancing the solution—but still raging against any citizen who doubts the wisdom of CDC (and WHO) recommendations, as if he were throwing matches at a pile of oily rags in the garage. Science!

This society also asks us to accept with a straight face that the online posts by the commenter nicknamed Streiff (a.k.a. Bill Crews) are obviously part of a “disinformation” campaign to make his CDC bosses look as if they have exaggerated and manipulated data about the COVID crisis, even though he’s posting unpaid and at some personal risk to his livelihood, whereas by day he could get comfortably paid just for parroting the CDC party line. Either half of his persona—or both—could be a lie, but since when do mainstream media pounce on unpaid messages that flout authority and declare them less revealing than paid, establishment propaganda? If the topic were anything other than the currently-sacred anti-COVID campaign, wouldn’t outlets like Daily Beast call Crews a whistleblower instead of a nasty troll with the audacity to contradict his wonderful bosses? Now we’re to think people’s paychecks are what bring out the truth?

All the while, the alleged symptoms of COVID keep on multiplying—as they likely will in Trump’s case, as people eagerly watch him for signs of weakness after he tested positive. But the proliferation of vague, mild symptoms is not usually reason to worry. It’s reason to question whether the disease-as-described is morphing into a meaningless catch-all, a constellation of misattributed ailments (both physical and almost immeasurably psychological) plus unrelated complaints.

Don’t think this way. Don’t pretend it’s essential to social cohesion. Or if it has already become the fundamental organizing principle of society, start thinking about ways to exit, which may be much more essential to survival.