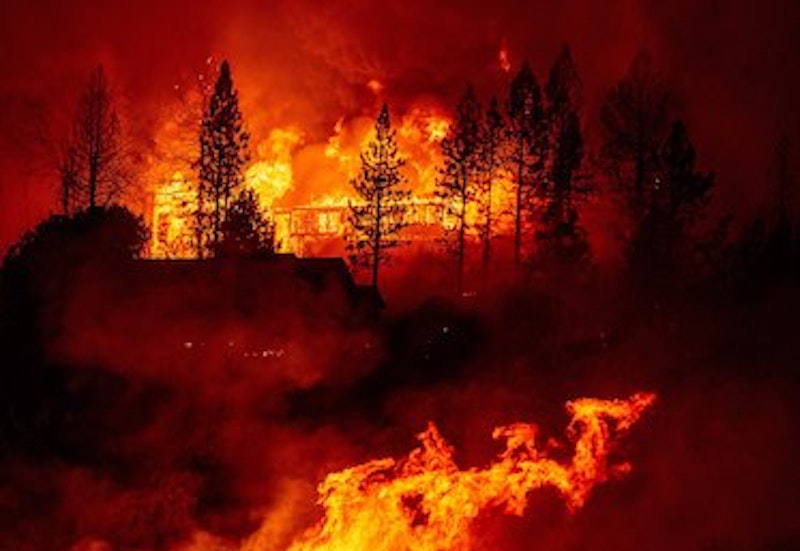 West coast wildfires have again wiped another town off the map, and as the flames move through towns and cities indiscriminately, the echoes of climate advocates, leaders, and organizations can be heard calling for a Green New Deal and a plea to democratic leaders and voters to act. The approach to combat climate change by the contemporary climate movement is at its core technocratic—made up of elite class intellectuals and college-aged climate activists as foot soldiers fight for a future they feel has been robbed from them.

Orange skies broke out over the west, and climate doom came across this professional class. Meanwhile, they sat peering out their windows and blasting their air filters, thankful they didn’t have to punch a clock, pick produce in the fields, or deliver packages to their class peers. Instead, a mental health break was on the agenda, a luxury that allows them to prioritize climate change as a proximate existential and intermittent threat because their immediate material conditions are met. Ranking climate change as your number one issue of concern falls along class hierarchy, and its positioning in your social reality relates directly for your need to protect your class interest and status. These aren’t the fertile grounds of any workable and comprising climate movement, and the irregularity at which climate change crises currently strike are not sustained enough to be prioritized by the globally oppressed.

Building a climate movement that centers around the Green New Deal as an equitable solution is standard professional liberal ideology. Put another way, it’s directly asking working and poor classes to make the climate crisis a priority, expecting this threat to be more pertinent than any current material hazard existing in their daily lives. This is because proponents of the Green New Deal are constrained by the ideology of contemporary American culture. They believe transformational change is accessible through education and mental perception of social reality, not material conditions. This is why you see a fixation on changing the minds of climate deniers; liberalism is idealist and its tool is rational argument. The most vocal climate leaders are academics, and the power structure has awarded them social mobility by following the pathway to class hierarchy, thus the only solutions that can be mustered to solve this crisis are germane to the modes of elite success.

By focusing on climate change over socioeconomic and environmental threats currently faced by the oppressed, the leaders of the climate movement fully engross themselves in American classism. All efforts are then poured into sustaining social position and decadence, which is what the Green New Deal is all about. It appeals to political benevolence and follows the path of energy reform, not de-growth and energy sovereignty. There’s no praxis that resembles building an actual climate movement. It’s because the response is to a fear of the unknown, and what a future of decommodification of resources and individuality may take away from class privilege. Instead, it’s a utopian vision that relies on the continued exploitation of the global working class and categorizing individuals as climate advocates and deniers as a moral social brand. In practice, this can be seen as hyper focus on climate education, narrative building, and cancellation. All of these sustain the oppressive power structures that maintain energy exploitation, and only perpetuate horizontal hostility and class contempt while simultaneously hindering the formation of a comprehensive climate coalition.

The current wildfire crisis on the west coast is an example of narrative building. The cause of the tragic fires has been reduced simply to climate change. Even though climate change is partially responsible for the igniting conditions, this this narrative ignores decades of mismanagement and the problem of overdevelopment, and fuels the divisive grounds on which climate change is fought across the country, which is antithetical to the mode of change promoted by the professional class. Removing nuance and claiming that the fires are in response to climate change is viewed as promoting an agenda, to further the careers of the elite professionals who hold contempt for all climate deniers. These are alienation tactics and not the way to build a movement. Rather, putting climate change in the terms of a material reality should be the strategy. The problem with the climate movement is not deniers, the issue is structural commodification of resources and concrete institutions of class hierarchy that feed cultural divisiveness and worker exploitation. The modern climate movement needs to invest in the immediate needs of the global working class in order to build the grounds for the peripheral climate crisis movement as the causes of both are issues rooted in exploitation: human and ecological. What’s really needed to amass a tractable climate movement is a divorce from privilege by the elite professional “climate leaders.” Understanding working-class struggles need to be met before the climate crisis can be addressed if the tactics of movement politics are to be used as the tool for change.

Instead of partaking in daily working class struggles, the current shift of climate advocate groups and leaders has moved toward climate justice which centers a narrative of the disproportionate “harm” climate change will have on marginalized communities, and that non-white activists and leaders need to be uplifted in the climate movement. There’s no arguing the fact that oppressed people and communities (who are majority non-white) will be more negatively impacted by climate change, and that the negative effects of climate change must be distributed equally to protect those most at risk. Climate justice, however, is a framework within an extractive and exploitative system that will do nothing to bring about energy sovereignty as it is based on post-industrialized western capitalist development. Bringing more leaders from marginalized communities into the fold doesn’t solve the exploitative and extractive system, nor does it build movement power, rather it attempts to approach climate change action from a cultural perspective.

Climate leaders in post-industrial western countries have exported U.S. cultural politics abroad and applied them across the board, even to the oppressed people that will have to mine the raw materials for the renewable energy sources. Imagine being a self-proclaimed climate leader and existing in a space that holds no power pertaining to the production of energy. Appealing to at-risk communities and telling them they have to be concerned about climate change now because it is in their best interest is an approach that will fail as it relies on oppressed people to prioritize climate rather than the short-term material needs that are prioritized. The climate movement needs to include labor workers involved in energy production that includes coal, oil, fracking, and rare earth metal extraction if it wants success. Those are the people who hold the potential power with respect to the means of production.

Calling these people bigots or telling them that their economic livelihoods are second to the climate crisis and climate justice isn’t going to do that. This isn’t to say racism and bigotry should be tolerated, but the cultural lens in which the climate movement has shifted is divisive. The approach should be a dialectic of unifying struggle; without that, the elite professional class comes off as holding contempt for the lowly working class.

The real struggle that faces the self-proclaimed climate leaders is their willingness to be accomplices, not to change the minds of climate deniers. Often their rhetoric is about gaining more people to care about climate change. Here, the lens should be reversed, and the real question should be how elite professionals that hold climate change as their top priority can risk their class interests to invest in working class issues not related to climate change but exploitation and oppression.

As the young climate advocates in the global north march for a future they feel they’ve been denied, I’d respond by asking what has been denied to the oppressed that has enabled you to participate in the call for a “post-industrial” society. A Green New Deal will be built upon the backs of the poor and global working class while continuing ecocide. I’d say that you’re fighting for your class interests and not for the liberation of the oppressed. Nothing is owed to you as your class and social status is bolstered by the current system you wish to make green and amicable. You have to sacrifice your class security, because mitigating the climate crisis must be approached with liberation of the oppressed and those participating in that struggle. This is a path of de-growth, energy sovereignty, and universality.