Let the Fringe Do Its Thing 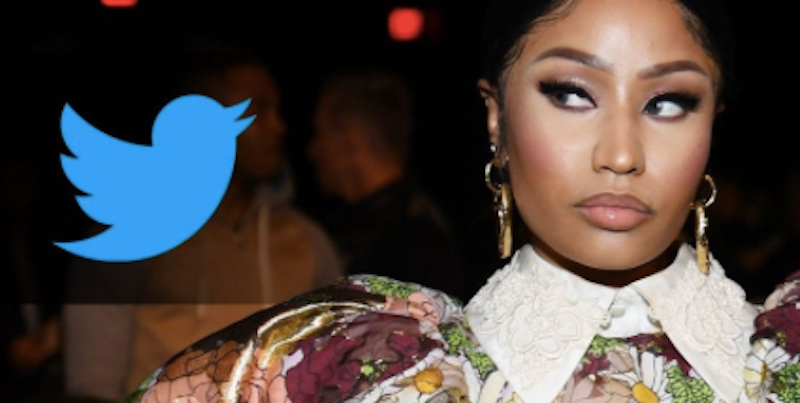 “It’s scary when they start telling you you can’t ask questions about anything,” singer Nicki Minaj said in an audio post after she found herself widely denounced and threatened with banishment from Twitter for relating the story of an acquaintance who suffered vaccine side effects, which the establishment (both governmental and private) is now committed to pretending don’t exist (the possibly-permanent side effects now being suffered by, for example, a friend of mine and by one of my closest relatives notwithstanding).

Minaj was likely cruising for a bruising in the eyes of the liberal establishment lately for calling MSNBC host Joy Reid a “homophobic coon” and for attacking the presumption of permanent black loyalty to the Democratic Party, not just for sounding skeptical about vaccines. Minaj likened the establishment and its censorious tendencies to China, showing she understands the basic authoritarian valences at work here, making her even more dangerous—a potential Kanye, as frightened Democrat strategists (and pharma executives and maybe the Chinese to boot) are likely well aware. Conservative Tucker Carlson grasped the potential well enough to boost her signal.

If she really wants to get the word out about anything in the future, though—especially if one or another social medium exiles her or she’s reluctant to partner with a partisan pundit—I suggest she try putting the message across her butt on some glamorous outfit. After over a week of left/liberal cheers for Rep. Alexandria Ocasio-Cortez’s “Tax the Rich” dress from the decadent Met Gala, you can’t deny this approach would probably work. And Minaj has significantly more messaging potential in this area than Ocasio-Cortez does.

Minaj is also probably smart enough to avoid the hypocrisy into which Ocasio-Cortez fell, the latter using for her pro-tax message a dress designer who appears guilty of multiple tax and breach of contract infractions. Might I suggest Minaj elevate the dialogue with a big “Taxation Is Theft” dress? Whether mandatory vaccination is assault is a more nuanced issue, but if there’s room on the dress, that topic can be addressed there as well, for the good of a newly-attentive country.

The creative, colorful people seem like the only ones capable of non-dogmatic debate lately. I wonder how many of Sen. Kyrsten Sinema’s elaborately-garbed and bisexual pals from the Burning Man festivals she has attended have noticed that she gets more grief these days from economically-doctrinaire, socialist-leaning Democrats for her moderate econ views than she does from conservatives for her outfits or sexual proclivities. Libertarians and (these days) even conservatives know how to leave people alone, while the left runs ever more eagerly into the arms of totalitarianism.

Now Sinema-skeptics are looking askance at the paid internship she had at a winery in the summer of 2020 (not even in her own state!). She’s a politician, so I won’t be shocked if the whole thing was some sort of high-end bribery scam, but I’ll be delighted if it was simply a healthy, rational case of a woman realizing she needs to have a job more productive than being an inherently parasitic Congress-creature. The quasi-anarchists of the Burning Man playa should cherish Sinema’s voluntary activities more than her—or anyone’s—power to tax, regulate, and jail. Government is not the way of peace, though many flaky artist types fail to get that message.

So rare are conservatives among artists, though, that the right is these days driven to embracing any creative person who still shows enough independence of mind to be apostate in the eyes of the left, whether it’s Minaj or, say, the late Norm Macdonald, who was not a conservative in any conventional sense (aside from some recent kind words about religion) but was much loved on the right simply for his ability to avoid giving a damn whether he was making the p.c. people feel uncomfortable, as with his deadpan jokes about 9/11 and painful anal sex. Experimentation can be unsettling, so it makes perfect sense that his best bits often had an air of quiet, ambiguous menace to them, precisely because you had no idea where he was going with them, if anywhere.

Comedienne Kerri Lendo accused Macdonald of harassment after his death, saying he’d grope women, sometimes comedy club staff, while feigning drunkenness. One can imagine that behavior coexisting with the aforementioned ambiguous menace, the weird testing of boundaries, but people seem disinclined to speak ill of the dead in this case, and maybe that’s some rough justice. Most people say he was nice, Lendo leaves us with room for doubt, and that may be about as much as we can usefully say now.

Without endorsing all the bad behavior of our culture’s weirdos and creatives, we all seemed to agree just a few years ago that a culture requires room for thinkers to doubt, room for creative people to breathe, and surely room for humorists to laugh and behave strangely. The fringe of the culture is full of oddballs, but we understood there were occasional big benefits—public goods, in the terminology of economics—from letting them do their thing, just as some of us understood there are benefits to letting bold entrepreneurs try experiments in the marketplace, which sometimes crash but sometimes yield wonders that more than make up for the losses.

The cowardly way we’re going, though, I worry we’ll soon be back to shaming people for changing the shape of bicycles or wearing neckties differently—narrow-mindedness of a sort so petty that even leftists, not just capitalists and freedom-lovers, may wake up and notice we’re being stifled.