To Infinity and Beyond!

Voting to raise the debt ceiling is no formality. 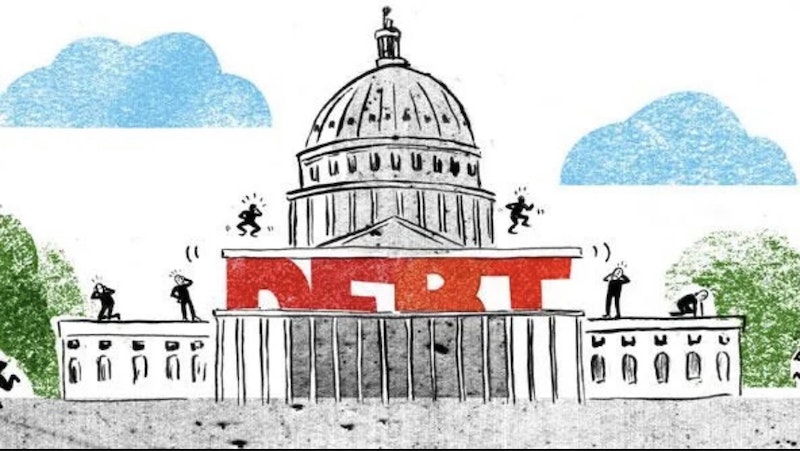 Again this year, the very idea that anyone could vote against raising the "ceiling" on the debt accumulated by the government of the United States has provoked outrage. "No matter how far they take their threat this time, McConnell and Republicans are counting on Americans not understanding what the debt ceiling is—that’s the only way this scam can work," writes Bruce Bartlett in The Washington Post, echoing remarks he's made each time the matter has arisen. "The debt limit is a legal formality. It isn’t an economic constraint on the federal government’s ability to borrow. A vote to raise it isn’t a vote for more debt; it’s a vote to fund the debts the government already owes."

Without such a vote, according to Treasury Secretary Janet Yellen, the US Treasury might be in default by mid-October. "If that happens," the Post's editorial board writes, also echoing remarks it's made each time the subject has come up, "there will be no doubt about who is at fault: Senate Minority Leader Mitch McConnell (R-Ky.) and his Republican caucus, who are playing games with the full faith and credit of the United States."

The default position in this sort of argument is that if "the American people" really "understood" that the debt ceiling vote is a "formality," and that "the full faith and credit" of the United States itself is at stake, they'd pressure the minority party torepudiate the brinksmanship, and vote to finance whatever the majority appropriated last year, even unto infinity. The Democrats claim that the $5 trillion in spending that they've just passed "won't add a dime" to the debt.

But to put that $5 trillion into some sort of perspective: 20 years ago, total Federal spending was less than $2 trillion (in the interim, there has been relatively little inflation), accounting for about 18 percent of GDP. In 2020, government spending accounted for about 44 percent of GDP. This is just in case you're under the impression that we're living in a period of neoliberal austerity. Rather, we're living in an economy we might term "debt socialism," giving the people (and, above all, defense contractors) what they want, and worrying about financing it later.

As the Democrats push for vast expenditures, the Republicans vast tax cuts, and both of them enthusiastically purchase new weapons systems, the debt spirals upward like a funnel cloud. It will soon exceed $30 trillion. The entire US economy—all the goods and services the nation possesses and produces—is worth about $25 trillion. The Federal government has borrowed more than the value of the whole continent.

If there’s any maximum to the debt a national government can non-disastrously accumulate in relation to the total value of everything it owns (or the total value of everything everyone owns), then we are overtopping the dam. I gather that it’s a matter of some dispute among economists whether there’s such a max; some appear to think that the status of the dollar as a reserve currency and other factors essentially delete any problems (oh, hyper-inflation, for example) that classical economics and various previous historical episodes might leave you associating with huge sovereign debt. One thing we can be certain of: we’re going to be testing this hypothesis by concrete experiment.

As to the idea that, if the American people really understood the situation, we’d see that raising the debt ceiling is a formality that we must all support, I haven't seen any particular evidence for that. First, no substantive (as opposed to procedural) vote in Congress ought to be dismissed as a formality, and this vote is very substantive. Sorry, but if it is put to a vote at all, then one of the possibilities is to vote "no."

Supposed to be a formality? Maybe. But it's not a formality. Tough luck, really.

To remind: the reason voting to raise the debt ceiling is supposed to be a formality is because Congress isn’t voting to authorize new debt, but (I suppose) to keep financing the debt that was accumulated last year. But if legislators really believed that they might not be able to finance this year's vast deficit spending, if they faced squarely that they might be setting up a government shutdown or even a default (which, honestly, seems unlikely in any event, at least until the economy re-collapses) they might think twice about accumulating it. Each time this debt ceiling business is debated, it ought to have a deterrent effect on spending.

A member of Congress who’s genuinely concerned about $30 trillion in debt has few ways to express this concern, short of voting against all appropriations. The reason that Congress votes on a debt ceiling is to keep them, and us, aware of how much more the US government is spending than it's taking in. Such awareness might lead to misgivings, and making a political issue of the debt ceiling is one of the few ways one might bring these to the attention of one's colleagues and constituents.

Admittedly, genuine concern about debt doesn’t seem to be among Mitch McConnell's motivations, and Republicans since the George W. Bush administration have shown themselves to be as enthusiastic for spending as the Democrats, with somewhat different priorities. But the disingenuousness runs both ways, and many leftish politicians and commentators appear to accept economic views that make government debt, even unto infinity, harmless or benign. That’s because they want to spend lots and lots of money.

I think, if they’re sincere, they should endorse the implications of their own views, and plunge the Federal government further into debt on their own responsibility. Or as Hillary Clinton once put it, "I know, I know we have still not shattered that highest and hardest debt ceiling, but someday, someone will."