Legacy of a Libertarian

Remember how Ron Paul shook up the political establishment with his guerilla campaigning and unexpectedly strong libertarian constiuency? His movement brought together a wide range of political beliefs, from disaffected conservatives to liberals upset with the government's encroachment on civil liberties, and was especially strong among young people. Now Paul supporters are trying to channel their revolution into a long-term political organization, and it's not going as well as they'd like. 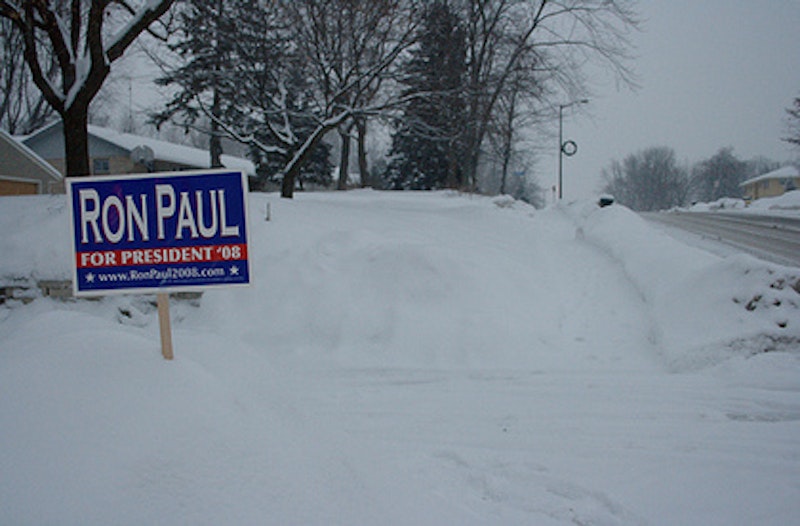 Has the Ron Paul Revolution been left out in the cold?  Photo by midnightcomm

"I don't mind playing a key role in this revolution," Paul said, "but it has to be more than a Ron Paul revolution."

For many young Libertarians, however, continuing that revolution looks ever harder.

A sizing up of the three remaining presidential candidates, including the Libertarian Party's Bob Barr, tends to leave many young Libertarians jaded and exasperated.

"I'm not sure what I'm going to do," said Mike Tellier, a 24-year-old Libertarian working in Washington, D.C. "I'm not really satisfied with either of the two top candidates, and with the third party, it's weighing whether it's even worth spending the time to vote."

With Paul no longer in the race, young Libertarians (for this story, defined as between the ages of 18 and 30) find themselves at an ideological crossroads. Do they compromise their personal ideologies and throw their weight behind a candidate with whom they disagree on certain issues out of fear their vote will otherwise be wasted on a third-party candidate?