Much as we’re in need of political reform nowadays, we could also use a new style icon on the national stage. Vote (Michelle) Obama! 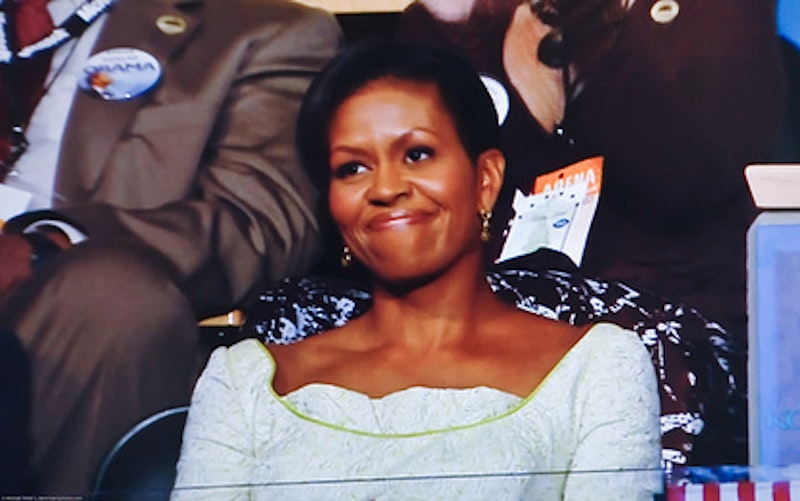 As a professional gay it is my job to idolize the Fiercest Women Alive (FWA). You know, like women who have a little something extra to bring to the table. You won’t see them at home baking a fuckin’ pie or quilting and shit. These bitches wear zebra and cheetah print at the same time and will jump right in your grill and be like, WHAT CHU WANT MOTHAFUCKA! Some of my favorite FWAs: Beyoncé because she knows how to work that weave on stage—shake them extensions girl but don’t break ya back!; Victoria Beckham because only she can get away with looking like a pterodactyl out of a gay Jurassic Park and still be totally major; and Nadja Salerno-Sonnenberg, this super butch concert violinist who squeezes the jizz out of any and all violin concertos.

And now, there’s Michelle Obama who IMO is basically the Lord and Savior. I’m not a political czar or whatever because I’m too superficial and I like to pAArty. But I will pop my head in to say that Micky Obama is totally major. More than anything, she represents a new type of American icon.

In an interview on Good Morning America, Michelle said the following about her personality: “I’ve got a loud mouth and Barack is very capable of dealing with a strong woman. That’s one reason he can be president—because he can deal with me.” Translation: “I’m running the show up in here.” Okay GET IT, Michelle!

Unfortunately, Michelle has taken a lot of RepubliKKKan shit lately because she’s a FWA. She talks too much, too loudly, she “hates America” and she’s not a subservient housewife who reeks of Lysol, cookie dough and mothballs. But is that really the type of First Lady we want? Would YOU visit a country that had a can of Lysol as its national symbol? B-O-R-I-N-G. I guess all I’m saying is that after so many years of a totalitarian government and a declining American Spirit, we need a First Family that will spice things up, make America cool again. Man, America used to be so cool. Now everybody wants to fuck us up and like China is gonna take over.

Part of the reason we’re uncool is that for the last eight years we’ve had a yawnful First Family. I mean really, besides being a librarian (of course!) what does Laura Bush do? Vacuum? Everybody loves a tabloid celebrity or a glamicon of some sort, and while our leaders don’t necessarily have to be movie stars or whatever, we often want to treat them that way. Just look at the number of tabloid magazines around: everybody loves celebrity gossip.

A yawnful First Family makes for a boring national image. Because the First Family isn’t just any family, but one that’s basically a metaphor for what America means, like what it stands for and shit. As it is now, none of the Republican mouthpieces are capable of captivating an audience, unless of course an oil scandal is involved. Nobody cares about what George Bush is doing let alone what Laura Bush wears to the library.

You’re probably saying, “Politics is not about the individual politician or their outfits or hobbies. It’s about the WORLD” and shit. It’s okay, I get it. But fashion is a more accurate indicator of personalities than you might think. Are you approachable or power-hungry? Don’t get me started on this recently unearthed Alaskan Z-lister, the anti-everything-not-related-to-guns-and-God Sarah Palin. She’s pretty and all, but somebody gag me with a Dress Barn gift card. Or what about Cindy McCain? Style gatekeeper Tim Gunn puts it best: “Cindy, with her button-down suits and blouses, looks like she’s duct-taped.”

Michelle Obama, on the other hand, is often compared to Jackie O, the ultimate in political style icons. I’ll never forget the other day when I saw her on TV at the Democratic National Convention completely fiercerized in that turquoise dress with those matching little flowers perched around her neck. So Glam! It’s like she woke up that morning and said to her gay stylist named Sashay, “Yeah nah! I’m ‘bout to work this turquoise dress. [Snaps fingers.] And Ima throw a bouquet of flowers around my neck just to really bring down the house.”

When Barack is elected to the presidency in November, I’ll be excited for him, the first black president etc., but I’ll be more excited to see tabloid photos of what glamorous outfit Michelle is wearing as she’s helping needy families or whatever. The second I see her in a pair of bug-eyed sunglasses, a pearl necklace and a coat cinched at the waist, I might pass out. Let’s wake-up and smell the mascara: The First Family is the image of America to the world as well as an index of our spirit. We can’t afford another four years of boredom. At least in an Obama White House, you can look forward to huge sunglasses and BBQs on the White House front lawn.

Maybe it’s totally naïve of me, but I really think Michelle brings a lot to the Obama ticket. I mean yeah, the ticket will physically say “Obama/Biden.” And sure, Michelle will only be the First Lady. Her extensive resumé aside, she’ll also become America’s newest icon, and OMG are we in desperate need an icon like her. Of course people will continue comparing her to Jackie O. But you know what? No. Michelle will never be Jackie O. What she will be, though, is a new type of American icon, an icon that will set the stage for America of the 21st century.