A few tempests, both real and metaphorical, arrived at John McCain's door on the eve of his convention. Will Bush and Cheney's useful absence mean more than Palin's impending grandmotherhood? 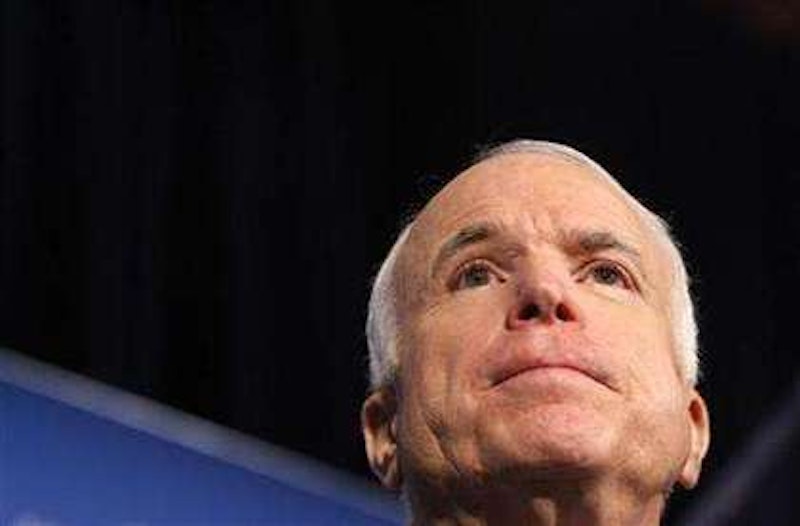 Suppose there really is a God. Suppose, further, that this is not some distant deity but a mischievous one who interferes in the affairs of men. The obvious question arises, just how much does He hate John McCain? At least, it arises if you're Don Fowler, former chair of the Democratic National Committee. Fowler had to apologize after an activist for the conservative website RedState surreptitiously recorded him telling a fellow Democrat, South Carolina congressman John Spratt, that Hurricane Gustav "is going to hit New Orleans about the time [Republicans] start" their convention in St. Paul, Minnesota. "That just demonstrates God is on our side." The video was posted on YouTube, causing a minor uproar.

Fowler played it off as a joke, but he had a point. The storm, coupled with the announcement that running mate Sarah Palin's 17-year-old daughter Bristol is five months pregnant and will marry the father, seems a bad omen for the Republican presidential nominee. Barack Obama and fellow Democrats spent most of last week in Denver advertising their vision for change and softening up Republicans. They capped it off with Obama's allegedly hard-hitting speech to a packed crowd at Invesco Field, in an important swing state. Republicans had a chance to hit back and to rally their own troops in a state that could go GOP. But then the hurricane harrumphed, taking the wind right out of their plans.

McCain made the call to drastically scale the event back for its opening day. Monday, conventioneers spent a few hours getting only necessary business out of the way. Rather than red meat speeches, they were treated to First Lady Laura Bush and her would-be replacement Cindy McCain appealing for funds to help those affected by the storm. Thanks to the Gustav's gentler than expected impact—it was quickly downgraded from a Category 3 to a "Cat 2" hurricane—the program today should be much closer to normal. The dispirited party hopes to salvage something from this dismal situation.

However, some reports give good reason to suspect that the Almighty has some fondness for the GOP nominee. To start with, President Bush, Dick Cheney, and Arnold Schwarzenegger cancelled travel plans and may not show up at the convention. Their absences will help the Arizona senator greatly. Schwarzenegger is hated by many conservative Republicans, who will now have precious little to complain about. Democrats keep trying to tie McCain more closely to the Bush administration. This emergency deprives them of that photo op. The New York Times editorialized, "That will relieve Mr. McCain of having to pay homage to the very man whose shadow he is desperately trying to escape." The storm also helped to distract the press from a number of things that McCain would not like talked about right now, from the platform fight over stem cell research to also-ran anti-war Republican Ron Paul's counter-convention.

Rather than having to deal with these messes, McCain was busy trying out for president. His campaign chartered a jet to fly worried delegates back to states that might be in Gustav's path, and he joined them there. Though he publicly expressed "every expectation" that the Bush administration wouldn't bungle this one as it did Katrina, he wanted to be on the ground to make sure there was no repeat. Nature played along. Gustav was just enough of storm to put a scare in people but did relatively little damage, hurricane-wise. The relevant television clip that was broadcast over and over again on the news is of water spilling over New Orleans's levies but the walls holding.

McCain did everything he could to make sure that's the image people will associate with his Republican Party. He told reporters Sunday, "This is a time when we have to do away with our party politics and we have to act as Americans." That's the best kind of politics to have when the heavens open up.