Republican voters (and John McCain) had a wild Labor Day weekend for all the wrong reasons. 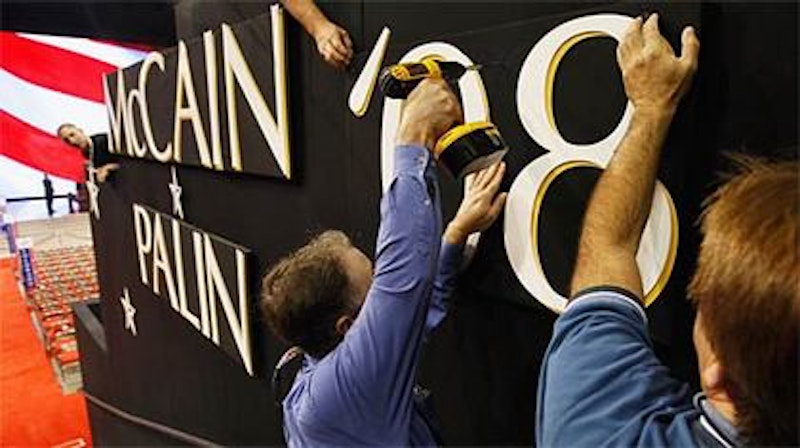 Well, it was a fine three-day run for the McCain campaign, and Republicans in general. As we went to bed last Thursday night, it appeared McCain was on the verge of tapping Minnesota Governor Tim Pawlenty for the veep slot, and the more I thought about that, I was disappointed, particularly when juxtaposed with Obama’s acceptance speech. Pawlenty is qualified, but he is essentially the personification of  “boring white guy.” Friday morning by the time I got to work, the room was buzzing about the rumor that McCain had instead chosen the nearly unknown Sarah Palin. Soon it was confirmed, and I was thrilled. I was familiar with her, but thought she was a long shot at best, particularly with the cloud of an investigation involving the Alaska public safety commission hanging over her. Now that she had been picked, though, I assumed that the team vetting McCain’s potential running mates had looked at the situation closely and determined she had done no wrong, or at least that the controversy wasn’t sufficiently detrimental to disqualify her from being chosen. What’s that saying about the folly of assumptions? Something about making an ass out of you and me?

Friday’s official introduction of Palin energized Republicans; many probably had their first genuine moment of enthusiasm about voting for McCain. To the extent that enthusiasm extended to their wallets, the windfall of contributions the campaign received over the weekend seemed to confirm GOP voters’ newfound excitement. In talking to a variety of friends and relatives of varying degrees of political interest and multiple political leanings Friday, I found the reaction to Palin uniformly positive. Palin’s enthusiasm, her verve, her genuineness, her refreshing departure from typical Washington politics and politicians—all were among the attributes positively cited by those I spoke to. Perhaps more importantly, though, her conservative bona fides are unassailable, and for a Republican base still suspicious of McCain’s sincerity on social issues, this was a choice that put many of those lingering concerns to rest. Over the weekend, McCain’s rallies had an energy level higher than any his campaign has seen so far. Record crowds turned out to see the Alaska governor in the swing states of Ohio and Pennsylvania. Predictably, the media questioned her experience (despite their general disinclination to do the same for Barack Obama), but in reality, she’s not much less experienced than Obama, and by virtue of having even a day of executive experience, she bests that of Obama, McCain and Joe Biden combined. Whether intentional or not, in a brilliant stroke of political jujitsu, every time the experience of the #2 person on the GOP ticket was questioned, the focus was implicitly or sub-consciously turned back to the inexperience of Barack Obama—the man at the top of the Democratic ticket.

But the subsequent news about Bristol Palin’s pregnancy reminded me of that moment in movies when the thriving dance party is suddenly interrupted by the sound of a record scratching. Was she properly vetted? On its face, the issue of her daughter’s pregnancy is just not a big deal. Nearly every family has had a similar instance, and based on the Palin family’s statement about the issues, it sounds as though they are dealing with it in a loving and unified way. But it is a very big deal in its implications. Does her daughter’s teenage pregnancy make her unfit to be the vice president? Of course not. But if McCain knew about this when he selected her, it raises serious doubts about his judgment and political acumen. If he indeed knew, and if he decided it was not sufficiently damaging to stop him from choosing her, then his campaign should have made this fact known shortly after unveiling her on Friday. Surely that would have been preferable to the bombshell news breaking on the first day of the Republican National Convention and in the midst of one of McCain’s only true momentum surges this year. I frankly don’t believe he did know, and if his vetters couldn’t unearth that, is there anything else that McCain’s campaign doesn’t know about Palin? And if Palin herself didn’t tell him, what does that tell us about her?

In general, it seems that most of the same conservative bloggers and writers who were heralding her choice Friday were now downplaying the political implications of her daughter’s pregnancy. The pro-life crowd is predictably ecstatic that Bristol Palin was choosing to keep her baby, and the emerging party line seems to be that the manner in which Sarah Palin and her husband had embraced the news only made her more appealing as a mother, and further, how dare the media and the Democrats invade the Palin’s privacy in this way! Obama, to his credit, almost immediately announced that the families of candidates should be off-limits, and that, oh, by the way, his mother had only been 18 when he was born. This was a classy reaction from Obama, and it was also politically pitch-perfect. Magnanimity is the shrewd play here, and Obama and Democrats will now sit back and give Palin and the GOP all the rope they need to hang themselves. As for Republicans and conservatives now claiming that this will have no backlash (or even that it will somehow be a net positive), they are simply kidding themselves—drunk, I can only assume, from a weekend bender of political enthusiasm after several painful years on the wagon.

Palin was unquestionably a risky choice for McCain, and for the pick to work out she had to be controversy-free until Election Day. While this was the gamble I thought McCain had to take in order to change the game and catalyze his candidacy, it was only worth it if he and his campaign were 100 percent certain there were no surprises about Palin waiting in the wings. Obviously they weren’t, and so in apparently failing to properly vet her, McCain will now find his judgment questioned, and rightfully so. As a committed Republican, I find myself shaking my head in disbelief and disappointment.

Tim Pawlenty is looking pretty good right about now. Perhaps there’s something to be said for the boring white guy after all.