If Sarah Palin wants to let motherhood define her character, let’s play ball. And we can start by addressing the many ways in which her anti-women views and busy family schedule make her a ridiculous VP choice. 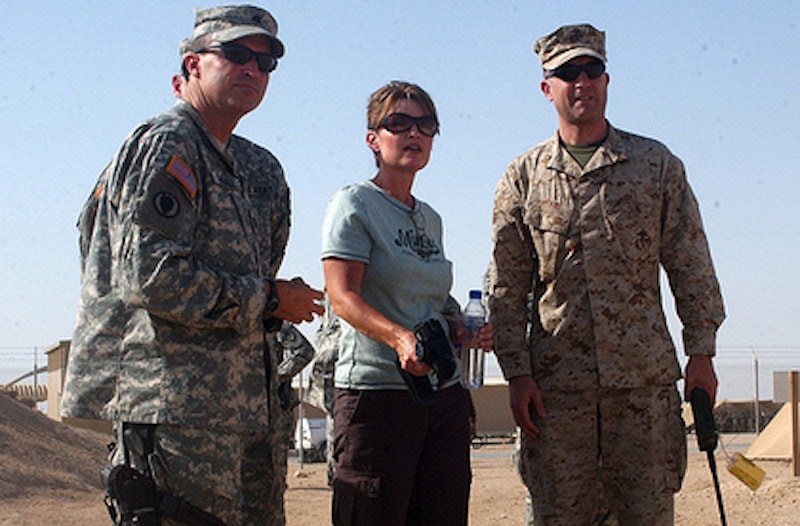 This past weekend, I let my vagina cook dinner. It cleaned my apartment and even took the dog for a walk. On Sunday, it was a little tired, so my vagina just relaxed on the couch, read a good book and watched a few movies on TV. Later this week, I’ll probably have it pay my bills, do some laundry and maybe even catch up on some emails to friends. I figured, hey, if John McCain’s right and my vagina can vote, what else could this amazing orifice do for me?

The selection of Alaska’s Gov. Sarah Palin as McCain’s running mate is blatant tokenism, that much is obvious. To offer up Palin as consolation for Hillary Clinton completely belittles women’s intelligence. Those who supported Clinton’s historic campaign did so not simply because she was a woman, but because she was smart and experienced—she’s a former First Lady and second term senator. Palin was the mayor of a town that’s smaller than my neighborhood and has spent less than two years as the governor of Alaska, which itself has a population smaller than Austin’s. Additionally, Clinton supported the interests of women voters. Palin is an anti-choice, anti-environmentalist who believes creationism should be taught in science classrooms and promotes consumer-driven health insurance. So what if she’s a self-proclaimed hockey mom? She fundamentally opposes everything Clinton supported and most Americans don’t give a crap about hockey anyway.

Alas, choosing Palin was still a clever move on McCain’s part. We’ve all heard of the disaffected Clinton supporters who so desperately wanted to see a woman president in their lifetimes that they are now threatening to vote for McCain as retribution for the Democratic party’s treatment of Clinton. Personally, I think their numbers are inflated by the news media and those who are serious about voting for McCain would have done so if Clinton had never been in the running to begin with. All the same, he’s likely to secure the few illogical women whose only investment in the election is seeing a woman take the highest office—McCain’s 72 years old, which puts Palin one rough influenza season away from the presidency—plus, he’s guaranteed the support of the evangelical right who are salivating over the demonstrably anti-choice candidate.

The selection puts most women in rather tenuous position, though. Increased numbers of women in politics, any women for either party, is a positive move toward greater equality in our government. But it is nearly impossible to feel any inkling of support for a woman whose views are so incredibly divergent from my own. Her personal politics do nothing to strengthen and support women’s interests and her lack of experience makes motherhood her most strongly noted accomplishment. She has five children, one with Down syndrome; you can read about it everywhere.

I don’t appreciate the reaction to her having a child with Down syndrome either. It’s been touted like some kind of heroic act: she learned that he would be born with Down syndrome, but she chose to keep him anyway. It’s obnoxious that Palin and McCain have co-opted for their benefit the very language that they wish to deny all other women. Palin didn’t choose to keep her child because she doesn’t believe women have that choice. Just as her pregnant 17-year-old daughter didn’t choose to go forward with gestation either. It’s disingenuous and offensive to revere Palin and her family for their choices, while also lauding them for their anti-choice, “family values” politics.

While I certainly disagree with nearly all of Palin’s politics and I don’t think an inexperienced governor caught up in a family scandal is a positive representation of women in government, I don’t want to see her become the target of sexism for the remainder of the campaign. That’s why I find the assertions that her daughter’s pregnancy should be withheld from campaign discourse and that Joe Biden will need to “be a gentleman” during the vice presidential debate so troubling. If Palin were a man whose 17-year-old daughter got pregnant, no one would be saying that we shouldn’t bring personal hardships into the political discourse. Yes it’s too bad that this young girl has been pulled into the spotlight during what can only be a frightening and difficult period, but that’s the price of her mother’s political success and Bristol Palin’s pregnancy can do much to inform us of what Sarah Palin would do support all of America’s young mothers, what she thinks about comprehensive sex education and how this personal experience will affect her politics. Sure Bristol Palin has the help of a supportive family, but what about all the teenage mothers who do not? In light of her daughter’s pregnancy, what would Sarah Palin like to do for other young mothers? I think it’s an important question and the answer shouldn’t be kept private.

As for the issue of the Palin versus Biden debate, the notion that Biden will need to be less aggressive is one the most sexist sentiments I’ve ever heard. If women are going to be major players in American politics, then they need to be treated as equals. If Palin isn’t prepared to be president should something happen to McCain, then that’s something voters should know. She shouldn’t be able to skate by simply because she’s a woman. That does nothing to promote equality and does a huge disservice to all women politicians. She’s certainly not so fragile that she can’t handle some hard-hitting criticism. I hope that Biden will force her to answer for her lack of experience as well as her anti-women and anti-environment politics. I hope he’ll be just as aggressive as he would be with any male candidate. That’s really what women need. Because here’s the thing about breaking through glass ceilings: if you really want to shatter glass, you have to be willing to bleed.