Angela Merkel’s on a Mission From God 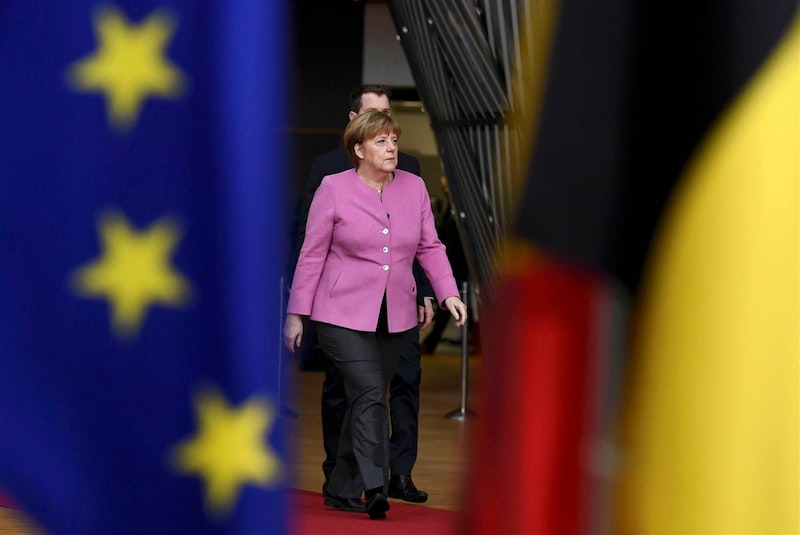 German Chancellor Angela Merkel, in 2015, said that marriage was between a man and a woman, and she hasn't changed her mind. On Friday, when the German parliament voted to approve same-sex marriage, Merkel voted against it. While she was the one who made it possible for the vote to take place, her views on this issue are way out of line with the German populace, 75 percent of which supports gay marriage.

Flash back, once again, to 2015 when Merkel rolled out the welcome mat for 890,000 migrants and refugees, and then in 2016 when 260,000 more asylum seekers were allowed in. It was the right thing to do, she assured the citizenry, even though the nation didn’t have the infrastructure necessary to accommodate such an influx of people from war zones, many of who were in need of psychiatric care. It appeared, more than anything, to be an act of faith. In the first quarter of 2016, migrants committed or tried to commit 69,000 crimes, but this possibility wasn't something the German leader wanted her people to ponder as she made her case with the "We can do this" mantra.

Germany will feel the aftershocks of this rash decision for years. The Washington Post reported in September of 2016 that German authorities were investigating 60 cases of migrants plotting with ISIS. If Germany isn't able to assimilate all these newcomers, Muslims will end up living in separate enclaves as they do in countries like the U.K., France, and Belgium. Alienation may then set in, and the second generation could produce a crop of radicalized youth, as has been the pattern elsewhere.

What Merkel has done is to lead Germany into a grand, willkommenskultur social experiment laden with risk—risk that the citizens were partially motivated to accept due to guilt over the Third Reich that lingers to this day, even among the many who weren't even born then. It's only political risk for Merkel, but not for the 1200 women in Cologne and other cities who were groped, assaulted and robbed by men mainly of North African and Arab appearance on last year's New Year's Eve. Afterwards, German officials covered it up, showing exactly whose interests they were protecting.

With diversity-embracing leaders such as Angela Merkel, there's doubt about whose interests they're actually looking out for. It often seems that they're more concerned about people who want to move to their nations than the people they were elected to serve. Take Canadian PM Justin Trudeau, who recently said he is “jealous” of Canada's immigrants because they chose Canada, as opposed to merely being born there. “You chose this country,” he said on CTV. “This is your country more than it is for others because we take it for granted.” Perhaps many chose Canada after seeing a soft-touch Canadian head of state who’d immediately elevate them over Canadians whose families went back generations. Many Canadians were outraged when their callow leader denigrated them like this, essentially calling them second-class citizens.

Perhaps Merkel’s advocacy of mass immigration has put her in a position where she felt the need to offer a sop to Germany’s many conservative voters. Her nation has an international reputation as a hotbed of liberalism, but the hinterlands are not anything like party-central Berlin, where anything goes. Her move on the gay marriage issue could be construed as canny politics in this context. While her vote alone would have sent the correct message, if this was in fact her strategy, she took the extra step of reiterating her words from 2015, telling reporters, ““For me, marriage in German law is marriage between a man and a woman and that is why I did not vote in favor of this bill today.”

Merkel hasn't softened, which must’ve dismayed Germany's LGBT community. Their own leader won't consider the many marriages that will now become legal as legitimate. Nations in Africa and elsewhere that persecute gays can now point to the anti-gay stance that the liberal “leader of the free world has just taken.” Perhaps the constituency Merkel, daughter of a Lutheran pastor, serves is actually her religion. Perhaps her God is telling her that it's okay to roll the dice on immigration because that's the Christian thing to do, but that empathy doesn't extend to certain people who want equal marriage rights.

It's hard to escape the conclusion that Merkel serves her God over her country. Nothing she'd done in office prepared people for her strong embrace of opening the borders. She’s had a reputation as a pragmatist, but the migrant issue morphed her into someone unconstrained by practical matters. There's a missionary zeal when you can look at your neighbor in France, which remains in a terrorism-induced state of emergency, and tell your people they have to take the chance they'll also be there one day.

The German LGBT community had to fight for a long time to gain equal marriage rights, but Germany has just brought in hundreds of thousands from the religion that persecutes gays the most. That's not Islamophobic—it's simply a fact. These people will now have many more children than German people in general do—once again, just a fact. The birth rate in Iraq in 2015 was 4.5 births per woman in 2015—in Germany it was 1.5. Merkel hasn't mentioned this. It would be insensitive—”racist” even. She thinks more Muslims in Germany combined with Christians strengthening their faith will shore up the moral foundations of her nation. The problem with her calculation is that it's built entirely on faith.