The Trump/Morning Joe Flap Is Not a Crisis 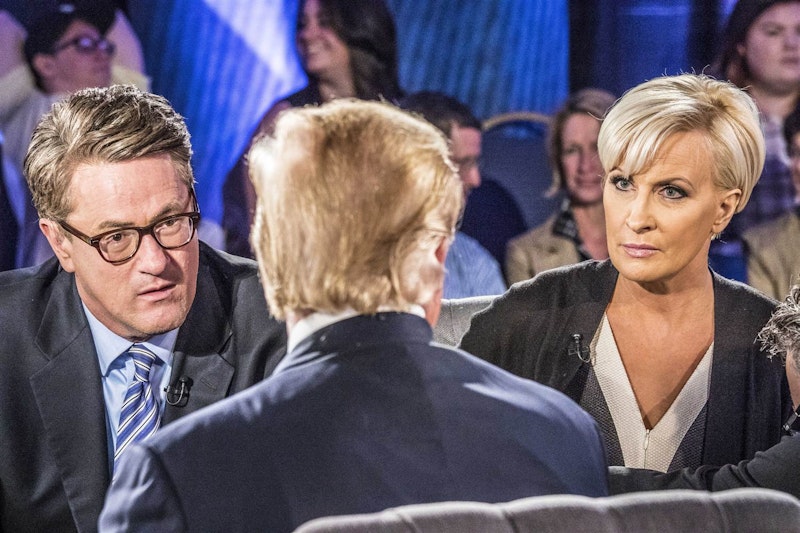 Ever since it appeared that Donald Trump would win the Republican nomination, on-air personalities and op-ed columnists have greeted tweets as crises. I'm trying to recall now the two dozen flippant 140-character remarks that Frank Bruni or Charles Blow received as the very last straw. (Remember Miss Universe?) Often the Twitter crises are greeted with extreme expressions of the commentator's conventionality: “This is not normal,” they say, as though normalcy were their great aspiration and self-evidently the purpose of all political discourse and social-media activity. Not only is it not normal, it’s not presidential, which makes it hard for such people to properly defer to “the office”—a supernatural being or role inhabited by different human bodies at different times.

Ana Navarro, the moderate Republican consultant and CNN personality, responded as follows to the Mika flap: “Listen, you crazy, lunatic, 70-year-old man-baby, stop it. You are now the president of the United States, the commander-in-chief, and you need to stop acting like a mean girl, because we just won’t take it.” That’s typical of the response, and Navarro has been saying things like that for months. The insults directed at Trump are relentlessly feminizing. No doubt they think that’ll particularly tick off Trump, though it also indicates that the commentators themselves regard femaleness as a degraded condition. After all that, I don't think they have the right to get pissy about Trump's tone.

I watch Morning Joe most days, though lately I've been wavering, because for months the two hosts and a variety of their guests have been generating a series of brutal but basically incompetent and extremely repetitive personal insults aimed at Trump. Mika often remarks on his small hands, pulling that out for the umpteenth time as though it were funny or clever. She calls him a baby or a child, says he's insane, has dementia, that he's a psychopath, a narcissist, and so on. She routinely calls him a liar and says he’s destroying the country. She’s been doing this day after day on national television for months, as has her co-host.

At one time, if you were an American politician and someone was saying stuff like that, you’d offer to meet him at Weehawken, with seconds and a pair of fine pistols. I don't want to seem like a Trumpy sexist, but really, you cannot demand that sort of satisfaction from Mika Brzezinski or Ana Navarro. You can, however, show them how to mint an original insult on Twitter, which is the next best thing.

If someone was doing that to me all day on national television, I'd fire back too, and it’s not hard to be more creative in one's insults, and more effective, than Mika Brzezinski. It's true that Trump's riposte had a sexist twist, though it seems less sexist if you don't isolate the material directed at her from the simultaneous insults directed at Joe Scarborough. I suppose that's bad.

But this flap amounts to an irrelevant, though at times amusing, squabble between extremely privileged people. Mika Brzezinski grew up in DC, her father one of the top Washington policy poobahs. She jets here and there, just as she pleases. She has a bully pulpit too, and has been using it every day. Yet she’s portrayed as a helpless woman trashed by the patriarchy. I don't think you can have the sort of power and prestige she has and be victimized by a nasty tweet, and I don't think that feminists should be portraying women as likely to faint dead when ridiculed.

Anyway, Donald and Mika, knock yourselves out. Escalate the verbal shenanigans toward infinity, touch again that allegedly lifted face with your supposedly tiny hands, or set each other’s pants on fire. This is not a national crisis; in fact it's next to nothing, like 100 tweetstorms before it. This is not immigration enforcement. This is not a proposed return to the war on drugs. This is not Trump coming for your health insurance. This is not tax policy. This is a crisis, at worst, in American entertainment.