Funny, but no Bernie Sanders. 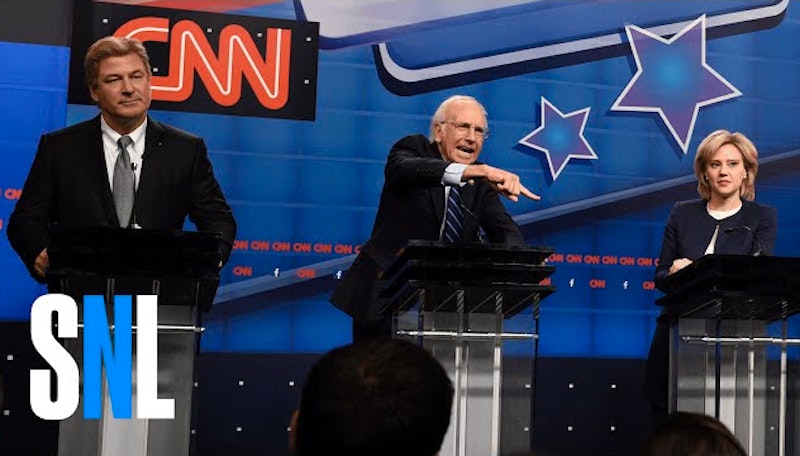 Various newspapers and websites say Larry David was perfect as Bernie Sanders on Saturday Night Live. What else are you going to say? Over the past few months plenty of people have noticed the David-Sanders resemblance, and finally responsible parties acted on it. Larry David shambled into an SNL sketch about the candidates and took his place. It was a treat. But David wasn't perfect as Bernie, and for obvious reasons.

Yes, both men are gangly old Jews from Brooklyn who get worked up fast. But David shouts (and jabbers and whines) about tiny stuff, his silly fusses and ideas. Sanders shouts (shouts only, no jabbering or whining) about big things: the destruction of the middle class, the insanity of the financial sector, and the collapse of the political system. He's loud all the time, nonstop, because this stuff is on his mind and there's no room for anything else. If you're going to be funny about Sanders, that would be the angle to take. You could also do something with his delivery, since his arms make him look like he's dictating to a semaphore specialist.

Larry David let his arms flop up and down, whereas the Sanders style is to have them up and out to the sides, where they threaten to windmill. David also played Sanders as someone who rages and then subsides—“Eh,” says the SNL Sanders, dropping his arms. The raging and subsiding was over silly stuff, like bank pens and their dumb little chains. But Sanders, as noted, aims at big things, and he does not subside. The SNL Sanders was just Larry David as himself, pretending to be semi-senile and feeling especially fed up. He sounded a bit like Jerry Stiller playing Frank Costanza on Seinfeld. In fact he sounded more like Stiller than he did Sanders.

Fade away. Jim Webb came in for interesting treatment. The sketch had him complain about time, but the actual Webb did a lot more complaining. He really bickered with the moderator and made a spectacle of himself. Typically an SNL sketch is all for spectacle and goofy behavior, especially when the characters are standing at podiums. But for Webb the show changed gears. The writers played down the bickering and made time for him to actually take questions from the moderator. These questions were about Webb's right-wing statements and votes, and they shut him up; that was the joke. “Come on, Anderson, lob one at me. Give Jimmy W. his shot and watch him soar.” “Okay, senator, sure. Here's a question. You're the only Democrat up here with an A rating from the NRA. Want to tell us why?” “Pass.” The second was about race, and same deal.

Maybe Saturday Night Live cares more about Senate votes than it used to. But I think the writers were homing in on something else. The old white man—the one who wasn't a Jew—was being held up as an example of what not to be. His votes and statements were read off as evidence placing him on the wrong side of history. He was condemned out of his own mouth, and he knew it. He stepped up to the questions and then stepped back down because there was nothing he could say.

The person posing the questions was Anderson Cooper, or Jon Rudnitsky as a swishy man with glasses and tight white hair. The real Cooper isn't swishy, so the SNL version seemed like some other character, maybe a local-news movie critic appointed to be alterity's stand-in and history's judge. Alec Baldwin, as poor Webb, was the defendant. Unlike the actual Webb, he didn't whine or glower. Instead he burbled. Misplaced confidence filled Baldwin's Webb like helium. The red-blooded old white man, a warrior and son of warriors, thought that all was his. “President Webb,” he said, announcing himself. “I know I've got this in the bag, but I need a little more time.”

I don't know why the writers made the switch, from grievance to happy entitlement, except that it rendered things more pleasant. The defendant in history's Other-loving dock was feeling no pain. He saluted with pride. “I kicked every single ass,” he said in his opening statement, thinking back to Vietnam. He saluted again at the end. “America, I didn't have enough time, but I still crushed it. President Webb”—salute—“out!” The Webb of the real debate didn't talk so much about his time at war. Asked about enemies he was proud of, he said drily, “I’d have to say the enemy soldier that threw the grenade that wounded me, but he’s not around right now to talk to.” SNL found this fleck of behavior and magnified it. Looking for something funny about Webb, something they could hang some business on, they settled on his being a Vietnam veteran. If you wonder whether times have changed, look at that.