Are travel restrictions in order? 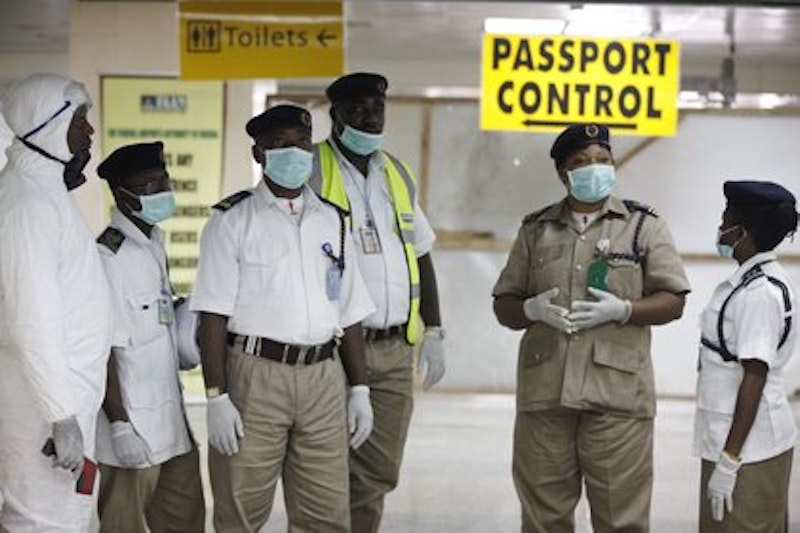 After reading comments by White House spokesman Josh Earnest and CDC Director Tom Frieden about the uselessness of taking preventive measures in the form of banning or restricting travel from Ebola-stricken nations, and that we should instead work to contain it if it arrives here, I had to say something.

When asked under what conditions President Obama would implement a travel ban, Earnest responded, “We are confident that the sophisticated medical infrastructure that exists here in the United States can prevent the wide spread of Ebola.” Asked a similar question, Frieden responded, "I wish we could get to zero risk by sealing off the border. But we can’t. The only way we are going to get to zero risk in this country is by controlling it in Africa. Until that happens, Americans may come back with Ebola. Other people who have a right to return or a visa to enter may come back. People will go to third countries and come from there. Sealing them off—first off won’t work. Second off, it will backfire. Because if we can’t get help in there, then we’re not going to be able to stop the outbreak and ultimately we will end up at higher risk, not lower risk.”

So, that’s it. Rather than try to do everything we can to prevent the disease from reaching our borders, we’re just going to take a “sit and wait” approach. While it may be true that an individual may opt to enter the US through a third party country, it’s still not a valid reason to not implement these measures. And while it may be true that zero risk can be obtained from controlling Ebola in Africa, it’s hubris to think that not one single infected person could make it into the United States. It happened once. It can happen again.

Frieden speaks of rights but with rights come responsibilities. Every person entering the United States has a responsibility not to bring with them a serious infectious disease and if they do, then the government has a responsibility to quarantine that individual and take every precaution to ensure they do not transmit that disease to others. The government also has the responsibility to deny entry to any individual who comes from a nation where a serious infectious disease is widespread if they believe that person could endanger the health and safety of Americans.

There is no cure for Ebola, there is only treatment. The difference between treatment in Africa and the U.S. is that in Africa there aren’t enough hospitals, beds or medical personnel to handle the cases. They also do not have access to the experimental treatment. The natives in infected countries are not educated in the proper ways of handling the sick and the dead. In the U.S., patients are isolated, receive specialized care and hydration and are given an experimental vaccine, one that has not been thoroughly tested. And just because one receives treatment in the U.S., it doesn’t mean that treatment is 100 percent effective. In fact, it’s not. People treated here can still die from the virus.

Because we can’t trust people not to lie on questionnaires and because not everyone may have a fever when attempting to enter the U.S., we have to take all preventive measures available. Travel restrictions make sense. Preventing entry by individuals from Ebola-stricken nations into the U.S. would be a wise first step. The U.S. would not be the first nation to do this. SOS International maintains a list of travel bans and restrictions of other nations, most of them in Africa.

Americans are wondering why this has not yet happened here. The response from government officials is that it would make things worse, that travel restrictions would hinder the ability of medical and military personnel to travel between the U.S. and Ebola-stricken nations. If that’s the case, officials should create a process that addresses the issue.

Here’s an idea: the U.S. could set up CDC-staffed quarantine facilities for its citizens and other authorized persons. It may require that they remain in quarantine for the duration of the 21-day incubation period before traveling to the U.S. It’s cumbersome, but isn’t it worth it if it saves lives? And if the governments of Ebola-stricken countries object to the quarantine stations, we simply tell them we won’t send personnel to assist them until they agree to it.

There’s been criticism in regard to the suggestion of travel restrictions. American scientist and Ebola expert David Quammen told Anderson Cooper that the U.S. cannot ban entry from Ebola-stricken nations because of slavery. He said, “I mean, we in America, how dare we turn our backs on Liberia given the fact that this is a country that was founded in the 1820s, 1830s because of American slavery. We have a responsibility to stay connected to them and help them see this through.”

Nobody is suggesting we turn our backs on Liberia or any country dealing with this crisis. However, while we help them, we have a responsibility to take every precaution to ensure the virus does not spread to the U.S. Our government must not allow itself to be guilted into not taking aggressive action because of its past history of slavery.

While the chances of being infected with Ebola are slim, it is possible. A Q&A on Ebola which was published by The New York Times made a bold statement that a person cannot contract Ebola via public transportation, saying a person with Ebola is “really, really sick” and “seeking hospital care.” It went on to say that it is unlikely that an infected person is riding the bus or going to work.

That’s wishful thinking. The early stages of Ebola include flu-like symptoms. Sick people, even those with the flu, ride the bus; go to work and school and the grocery store, every single day. All it takes is the right contact during the symptoms stage to transmit the virus. A person who’s not traveled to infected areas of the world would have no reason to believe they’ve contracted anything more than the flu—until it’s too late.  By that time, how many others would they have been in contact with?

The CDC itself has stated that while Ebola cannot be spread through the air by coughing or sneezing, it can be spread if infected sweat, mucus or saliva is left on some surfaces. The Washington Post reported via the CDC that that the virus can live for several hours in dried bodily fluids and that there’s the possibility it can spread by handshake if mucus or saliva is present on an infected person’s hand.

Government officials insisted early on that it was unlikely Ebola would make its way here and yet it did.  Thomas Duncan was infected with the virus though he exhibited no symptoms. He lied on a questionnaire and entered the U.S. and is now in a Dallas hospital in critical condition. The people he was living with are in quarantine and the government is tracking down every individual who had contact with him.

Ebola is in America and while there’s no reason to panic, there is cause for concern, especially considering the White House and the CDC, the agency responsible for protecting Americans from health threats, refuse to take certain preventive measures as part of a broader plan to fight this deadly virus. This is unacceptable. The American people expect their government to do everything within its power to ensure the safety and security of this nation. We can’t predict with any certainty that another infected person will not enter this country. We can’t predict that if an infected person does enter this country, that the virus will not spread. And we can’t predict that if it does spread, those infected can be successfully treated.