The South Dakota Governor might run for president in 2024. 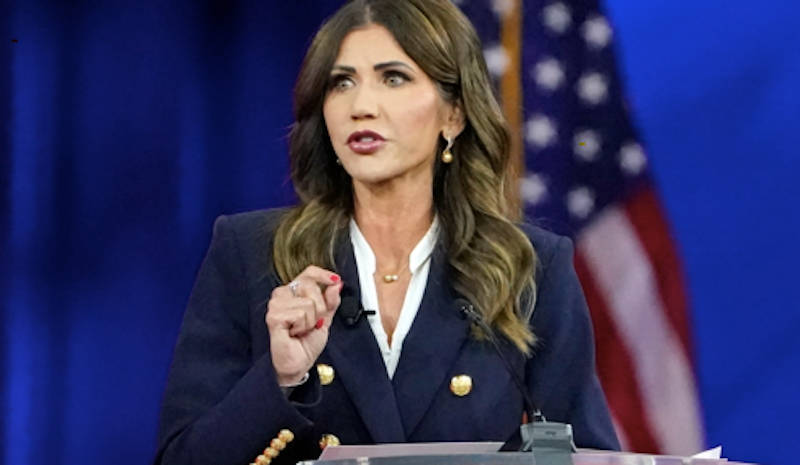 It’s not common for governors from the middle of the country to visit Massachusetts, but it happened last week. South Dakota Gov. Kristi Noem came to Massachusetts for a few days to support Republican Geoff Diehl’s run for governor. She’s the second-most prominent Republican to endorse Diehl in the race; Donald Trump is No. 1.

I attended a press conference in the North End of Boston in hopes of asking Noem a question. It was successful—after the John Fetterman/Bernie Sanders-loving liberal from The Boston Herald finally shut up; he didn’t even use most of the quotes because the responses didn’t fit his preconceived narrative.

I asked Noem about Maura Healey, the Democrat in the race. She’s not a fan of Healey. Asking the governor of South Dakota a question at a press conference in Massachusetts was mildly interesting, but what came next was more so: the Diehl campaign invited the media to cover Noem and Diehl campaigning in the North End.

Noem and the Diehl campaign visited a few restaurants and shops in the North End, plus a fire station. Some business owners seemed pleasantly surprised by Noem’s hands-off approach to the Covid pandemic. Compare that to Boston where mayor Michelle Wu instituted vaccine passports for a couple of months last winter, and the city charging North End restaurants (no other neighborhoods) $7500 for outdoor dining permits.

After the first restaurant stop, the owner wanted Noem to say hello to one of his relatives: an old Italian woman. This woman invited the entire group into her apartment, insisted on making Noem an espresso, and offered her homemade limoncello, pre-packaged cakes, and Italian cookies to everyone. I enjoyed the limoncello but didn’t know it contained alcohol. Drinking on the job isn’t the best idea, but it worked out in this instance.

Noem liked the espresso so much that she bought an espresso maker from an Italian corner store. They also went into Pizzeria Regina. It’s difficult to take a good photo of politicians talking to a business owner in the middle of a crowded restaurant. Some in the media wondered why Noem came to Massachusetts, but for her, it’s a solid strategy. Noem is one of the names that keeps coming up among Republicans rumored to want to run for president in 2024, alongside Nikki Haley, Mike Pence, Ted Cruz, Mike Pompeo, Larry Hogan, Ron DeSantis, Donald Trump, and others.

Noem has run digital ads in early primary states, including New Hampshire. And Massachusetts is one of the bigger Super Tuesday states. It doesn’t receive much attention in the primary either. It’s a very blue state, but its primary delegates count. Currying favor with a prominent conservative Republican in Massachusetts like Diehl is smart for someone who may have presidential aspirations. I expect Diehl will be the Republican nominee for governor this year. It’ll mark the second time in four years that he earned the Republican nomination in a statewide race in the Commonwealth; he was the Republican nominee for U.S. Senate in 2018. Getting Diehl’s support could help someone in a presidential primary.

Noem met some other prominent right-wingers on her trip to Massachusetts. Diehl and Noem did a fundraiser at billionaire car dealer Ernie Boch Jr.’s house. They attended a private fundraiser in the North End that included some figures in the conservative faction of Massachusetts’ Republican Party.

But if Trump runs again in 2024, it’s hard to imagine anyone standing a chance against him. If that’s what happens, then at least Noem got an espresso maker to take home to South Dakota.